Khabib Nurmagomedov Vs Tony Ferguson: Who Are The Fighters?

It seems hopefully 5th time lucky we will see the lightweight title clash between the champion ‘The Eagle’ Khabib Nurmagomedov and ‘El Cucuy’ Tony Ferguson. Here today we are going to take a look at both fighters career to date and who they are.

We will start with the champ Khabib Nurmagomedov. Khabib is a Dagestan born fighter with an immaculate professional record of 28-0-0. Khabib is probably the best wrestler the UFC has ever seen. Khabib has been scheduled to fight Tony Ferguson a few times now but due to injuries this fight has not taken place yet, we are hoping April 18th is the date where it finally happens.

Khabibs last outing was when he faced former UFC Interim Lightweight champion Dustin Porier. But before that, he had come off a huge victory over Former UFC Lightweight Champion Conor McGregor after their nasty and bitter feud. Khabib defeated McGregor in the fourth round by submission via a neck crank. The president of the UFC Dana White has also confirmed that if Khabib can defeat Tony and McGregor can win his upcoming fight against Donald Cerrone then we will be looking at a Khabib vs McGregor rematch down the line. 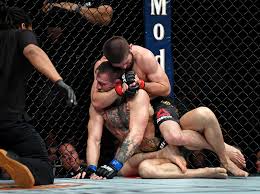 Now on to ‘El Cucuy’ Tony Ferguson the American born fighter has a professional MMA record of 26-3-0. Tony is currently on a 12 fight winning streak with his last loss coming against Michael Johnson way back in 2012. During his 12 fight winning streak, Tony has defeated the names of Anthony Pettis, Donald Cerrone and Rafael Dos Anjos.

During Tony’s time in the UFC, he has won 15 of his 16 fights with five wins coming from KO/TKO, six coming from submission and four going to the judges’ scorecards.

After this fight will we see Tony finally become champion? Or will Khabib once again prove why he is the best in the world and then go on to fight Conor McGregor once again?