Fighters At A Glance: Anthony Pettis

Anthony ‘Showtime’ Pettis is a former UFC Lightweight Champion. So today we are going to look at the former champs UFC career to date.

Anthony Pettis has competed in the UFC since way back in 2011 where he competed at The Ultimate Fighter Finale: Team Lesnar vs Team Dos Santos. However, it wasn’t to be a dream UFC debut for ‘Showtime’ on the night as he bowed out to Clay Guida in a unanimous decision loss. In October of the same year, Pettis fought on the UFC 136 card, fighting Jeremy Stephens defeating him via split decision. 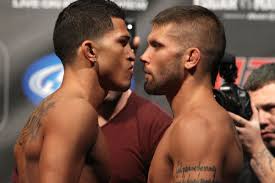 Then after over a year out of action, Anthony returned to action to defend his title at UFC 181 against Gilbert Melendez and Pettis defeated Melendez in the second round via submission to secure his first UFC title defence.

At UFC 185 Pettis tried to defend his UFC Lightweight strap for the second time against Rafael Dos Anjos. However, on this occasion it was not a positive result for the champ as he lost his title via unanimous decision to Dos Anjos. This loss was the first off 3 straight losses for Pettis as he lost to both Eddie Alvarez and Edson Barboza both by decision.

After those 3 losses, Anthony fought Charles Oliveira in August 2016 and defeated him via submission in the third round. After this fight, Pettis went on to lose an Interim Featherweight Title fight against Max Holloway and getting TKO’d in the third round.

Pettis then got back to winning ways again after defeating Jim Miller by decision at UFC 213. Then in November 2017, Pettis lost again this time to Dustin Porier after getting KO’d in the third round. Pettis then defeated Michael Chiesa via submission.

Pettis then fought Tony Ferguson and lost via corner stoppage after the second round after breaking his hand. Then Pettis did what nobody had done before and knocked out Stephen ‘Wonderboy’ Thompson. 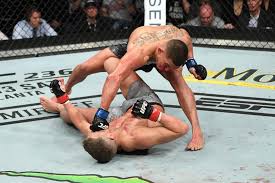 Pettis is currently on a 2 fight losing streak after losing to Nate Diaz via decision and to Diego Ferreira via submission.

Will we see Pettis climb his way back up the ladder and secure another UFC title? Only time will tell…

No timeline for return of Stipe Miocic