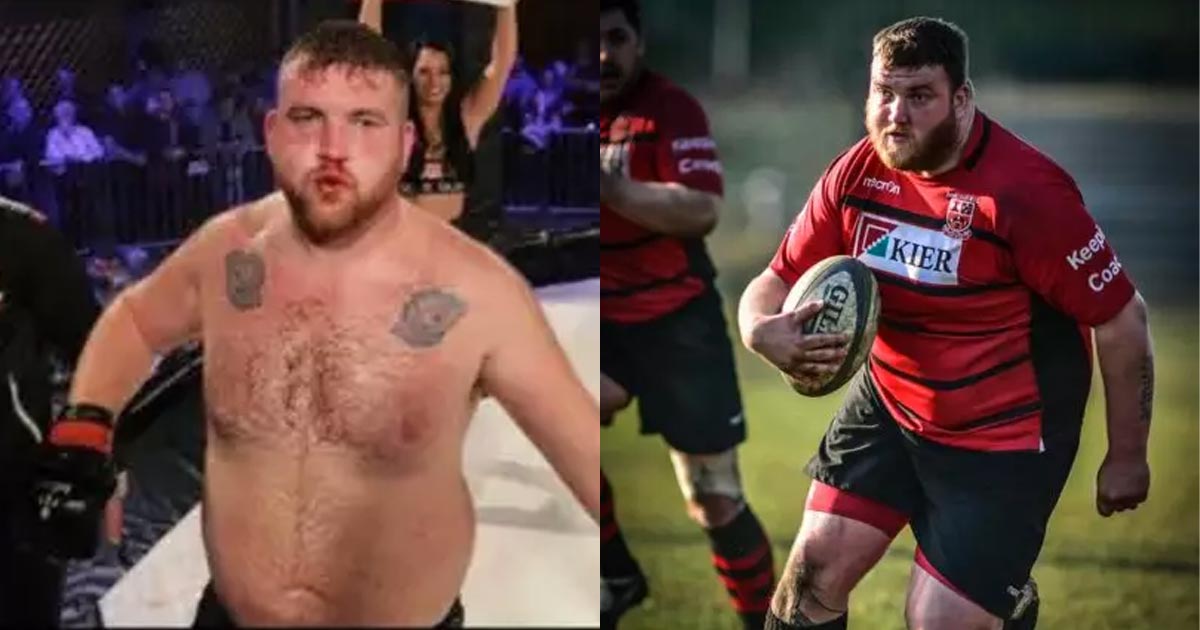 My quest continues. Today I spoke with professional heavyweight Geraint Hill. Geraint is a big character in the MMA community and now trains at Lewis Longs Matt Academy, I hope you get a snippet of this mans personality as men like him don’t come around too often.

Here we talk about his current situation, his health and fitness, Tyson Fury, rugby and of course, his views on “is Wales a fighting nation or rugby one?”

Glenn – Geraint, thanks for your time. How have you been?

Geraint – All good Glenn, apart from the obvious with what is going on. Cabin fever starting to kick in.

Glenn – Don’t I know it. Busting to train me.  I see you your back in training, You not fought since your 5 round war with Sofiane Boukicho back in November 2018, which I’m glad I was present for, what’s your plans?

Geraint – To be honest mate, I just want to get the bug again. As you know I have issues with mental health, so I’ve just been dealing with that. Once all this COVID blows over, il get myself fit again and get ready to fight. Sooner rather than later hopefully. Yes, 5 rounds, who would have thought it. I didn’t even know until the day of the fight.

Glenn – yes I remember your reaction in the changing rooms. Priceless. You mention mental health, I find it’s hidden in men like us. Do you think MMA helps?

Geraint – Yes. Definitely.  Anyone who follows me on any social media platform knows I’m quite open with my mental health issues. 100% exercise of any sort helps. A prime example is Tyson  Fury, stories like his pick me up on my down days, I really see him has an inspiration. Lewis Long and Wayne Samway at the Matt Academy have helped massively when it comes to my mind. It doesn’t take a lot to make someone feel relaxed and comfortable. Whether it’s a brief chat or a training session they are amazing and I’m thankful for them.

Glenn – that’s amazing to hear and kudos to them. So your still an active rugby player, do you think rugby and MMA can be done alongside each other or would you benefit from just fighting?

Geraint – in fairness I only help Abercynon Seconds out when needed now, which seems too often. Being a heavyweight I’m not a massive fan of the running that’s involved in the game unless it’s with a ball in hand. I dropped rugby completely when I first started fighting, when I went back after a year I felt nuch fitter and stronger so found combat sport helped me as a player. As you know after a game and sometimes training, there are beers involved and you just can’t do that as a fighter if you want to be taken seriously in the sport

Glenn – Absolutely, rugby culture is sometimes a bad place in rugby. From a prop forward point of view, how do you find the new laws?

Geraint – New? Don’t think I ever knew the old ones! I just run and tackle. I did have a yellow recently for doing something In a ruck you not allowed to do anymore.

Glenn – Back to MMA now, you train at The Matt Academy, a great gym with the people to match. How does training with them differ to training at Abercynon RFC?

Geraint – One’s rugby, the others a combat sport. Nah, both groups are good lads. Even though MMA is an individual sport, you have to have a good team behind you. At the matt, we definitely have that. Lew and Wayne both have the fighters best interest at heart, along with all the other coaches and fighters there. There’s a great stable of fighters there that help each other and constantly looking to better each other, sharing knowledge on the Matt’s. It’s a great family atmosphere.

Glenn – certainly a big part of the success of a fighter I feel. As one of only a handful of pro heavyweight fighters, do you find it hard to get matched? Has it gotten any easier with the number growth?

Geraint – As you mentioned I haven’t been very active in the last 2 years, but I have seen numbers rise in UK and MMA lately. I have had a few fighters and managers contact me regarding fights recently and before I joined the matt, I probably would have taken them while being underprepared. Lew and Wayne have helped me realise it’s not about taking a fight to earn a quick buck. It’s about being ready and at my best and I will not be accepting one until they say I’m ready.

Glenn – I have no doubt you be ready and look forward to you fighting in the ever-growing heavyweight division. So in a nutshell, do you think Wales is a fighting nation or a rugby one?

Geraint – I think MMA in wales is growing enormously, with more and more fighters getting on the bigger shows, and a much bigger fan base, most of my rugby teammates recently getting into it. I also feel there’s enough fighting at grassroots rugby to call us a fighting nation. But in terms of sport, rugby will always be number 1.

Glenn – Geraint, thanks for your time and wish you all the best when we eventually get back to the grind.

Geraint – Thanks, Glenn.  Thanks for the opportunity of my first interview after 9 pro fights. All the best with your training and I look forward to doing a few sessions up at nails with you.

So, I think my findings so far are proving that although we are a very tough, passionate nation, we are still gonna be a country that follows the oval ball no matter the rules. Unless my next interview comes up with a different view, I’m gonna have to draw my conclusion. Until next time…..