As we all know the world is in the middle of a pandemic because of the virus COVID-19. Every fan is hoping this worldwide pandemic ends soon. If this pandemic does not cause the cancellation of UFC 250 I am going to go a little bit into the main event Henry Cejudo vs Jose Aldo for the UFC Bantamweight Championship and at the end give my opinion on the result of the fight.

First, we’ll talk about the challenger Jose Aldo. Jose is a true legend in mixed martial arts with a record of 28 wins and 6 losses, Jose once went on an undefeated streak of around 10 years. The past few years of Jose’s career hasn’t proven how great he is and how much he has dedicated his life to the sport. Aldo is a former two times UFC featherweight champion. Aldo made 8 UFC title defences defeating the likes of Chad Mendes and Frankie Edgar so his resume is far from underwhelming. What I believe has put Jose Aldo’s career on the rails is his bitter rivalry with Conor McGregor which to many he doesn’t seem to have recovered from. This was the fight that ended Aldo’s long undefeated streak with a brutal 13-second ko and I think this is what has made him have a rocky last few years. Aldo has great punching power and that is his best way of finishing a fight but a lot of fans fear Jose is not at his healthiest at 135 pounds, if true this could be a deciding factor in the fight. 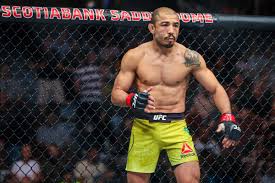 Now let’s move on to the Champ. Cejudo has recently enjoyed a rise to the top of the UFC after defeating the likes of Demetrious Johnson and TJ Dillashaw. Triple C certainly isn’t everyone’s favourite fighter but make no mistake this man is very dangerous in the octagon. After defeating DJ to capture the 125-pound belt he then became double champ by knocking out TJ Dillashaw and winning the 135-pound title since then he has had a bantamweight title defence against Marlon Moraes and had to drop the featherweight title. Cejudo has the ability to knock Aldo out with his fast punching speed and can grind out a decision win.

After all, is said and done I truly believe Henry Cejudo will come out of this fight with the decision victory. I say this because I don’t think Aldo will be able to keep up with Cejudo and therefore Triple C will grind Aldo out to a decision.