Fighters At A Glance: Amanda Nunes

On today’s Fighters At A Glance we will be looking at the first women’s fighter we have seen on fighters at a glance Amanda Nunes. Amanda is currently the UFC Women’s Bantamweight and Featherweight champion, today as we usually do we are going to look at Amanda’s UFC career and see who she has fought and what could be in store in the future.

Amanda first debuted in the UFC back in August of 2013 where she faced Sheila Gaff. This would be a dream debut for Nunes as she knocked out Sheila Gaff in the very first round. Then only three months later Nunes would step into the octagon again. This time she came up against Germaine De Randamie and again won by knock out in the first round. 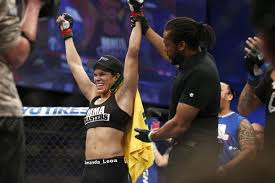 After over ten months out of action, Nunes returned to the octagon in September of 2014 and this would be her only fight of that year and the bout was against Cat Zingano. Unfortunately, Nunes suffered her first and only so far UFC loss as she was TKO’d brutally in the third and final round of that fight. After her devastating loss, she would return against Shayna Baszler and she couldn’t have returned more devastatingly as she KO’d Baszler in the very first round. Amanda then fought Sara McMann and submitted her inside one round. Then came her first fight with current Women’s Flyweight champion Valentina Shevchenko and Nunes won this fight via decision.

Then came Nune’s first title shot as she headlined UFC 200 where she faced Miesha Tate. Amanda submitted Tate in the first round to become the Women’s Bantamweight champion. Then came to her first title defence against ‘Rowdy’ Ronda Rousey and Nunes destroyed Ronda in the first round putting an end to the Rousey era once and for all. Nunes then went and defended the title another 2 times against Valentina Shevchenko and Raquel Pennington. 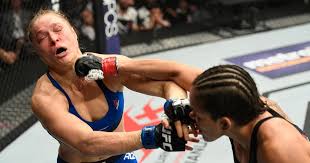 Then came the big fight against Cris Cyborg for the Women’s Featherweight title. Like most of her fights, Nunes beat Cyborg via knockout in the very first round and became the first Women’s fighter to receive the Champ Champ status. After the Cyborg fight, Nunes fought twice against Holly Holm and Germaine De Randamie defeating them both.

Nunes is now set to face Felicia Spencer at UFC 250 and whether that fight is to take place with the global pandemic going on remains to be seen. So will Nunes fight at UFC 250? Only time will tell…