When Politics and Sports Collide

What do you do when your escapist bubble pops?

Many people believe that when it comes to sports, we should leave politics at the door. That those three hours on the sofa cheering on our favourite athletes should be a cosy place of solace away from the divisive societal tornado raging outside. And for the most part, I agree. However, what do you do when an extremely talented, yet loud and obnoxious dick like Colby Covington kicks down that door, marches into our place of solace and repeatedly slaps the MMA masses across the face with his (let’s say, controversial) political views? When someone builds their entire persona around unapologetic support for a widely-loathed (and yet widely supported) political agenda. Is it a gimmick? Sure… to an extent. That line between the man and his act grows blurrier with each passing Trump rally appearance though. And for some, it’s hard to look past.

This all begs the question: where does the Colby Covington character end, and where does the human being begin? There’s an old phrase in the world of professional wrestling that ‘your gimmick should just be yourself with the volume turned up,’ and Vince McMahon’s wacky world of wrestling is a world from which Colby has clearly learned some of his tricks (just listen to his entrance theme for Christ’s sake). This would suggest that Colby believes every word, every insult, and every Donald Trump endorsement, and is simply choosing to be unabashedly vocal about his beliefs, all in the name of controversy (which wrestling legend Eric Bischoff famously said equals cash). If everything “Chaos” says does come from the heart, then even his most *colourful* comments are a good indicator of who the man behind the red hat really is. However, others argue that it’s all just a charade; that underneath that MAGA hat and evil grin, there’s a nice, normal guy just trying to make his money.  That none of it is sincere, and therefore it is fine. 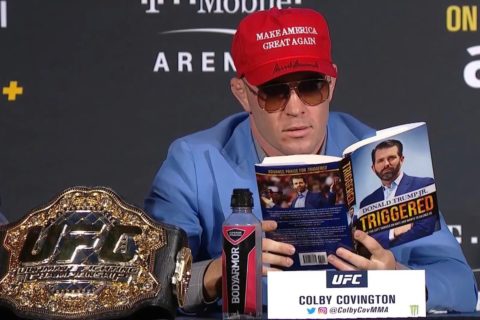 So which is it? The answer most likely lies somewhere in the middle. If Covington is to be believed, he was on the verge of being cut from the promotion prior to his fight with Demian Maia in Brazil, and thus decided to birth a character in that infamous post-fight interview to generate interest and save his skin. Let’s say every word of that story is true: does that make it OK? Regardless of your political leaning, Covington has crossed many lines and made some very ugly remarks about race. Is calling Brazilian fans ‘filthy animals’ completely fine if done in the name of grabbing headlines? Do we simply forget about him mocking Kamaru Usman’s African relatives because he was merely trying to be a good heel (professional wrestling villain)?  Some say yes. But I’m sure many of you, like me, can’t help but feel uncomfortable about it.

Let’s get back to the present though, shall we? The build to Covington’s fight with Tyron Woodley this past weekend was a surprisingly tame one given the years of bad blood and public back-and-forth. “Chaos” was largely absent in the MMA media, with not much in the way of verbal barbs to throw at his longtime rival. The minute these two arrived for media day last week though, I knew things were going to get ugly. Not because of any potential brawling during the face-off, but because of what this fight now represented; both to the men, and to the public. Covington rocked up sporting his usual MAGA hat and trashy suit combo, boasting endlessly about the president’s most recent praise of him. Same old story. What wasn’t the same, however, was Tyron Woodley walking in wearing a “LEGALIZE BEING BLACK” T-shirt, a “Make Racists Catch the Fade Again” parody hat, and answering every question with some variation of “Black Lives Matter.” For the first time ever, Colby’s opponent was bringing politics into the mix just as much as he was.

“This is a typical red versus blue fight…This is me, capitalism, versus him, communism.”

“I feel like what’s going on in our society, with social inequality… African Americans being shot and killed by law enforcement, yeah, it’s the perfect time for it. … I think the fight means more now.”

See if you can guess who said which.

They couldn’t have made it more political if they tried. And with these opposing ideologies clashing like never before in 2020 (and coming to a head in the fast-approaching US election), it became an inseparable part of the narrative. The fight was now more than just two top welterweights with a beef to settle. In the eyes of the public, this was the battle of right vs left and MAGA v BLM, personified and playing out before our very eyes in the octagon. 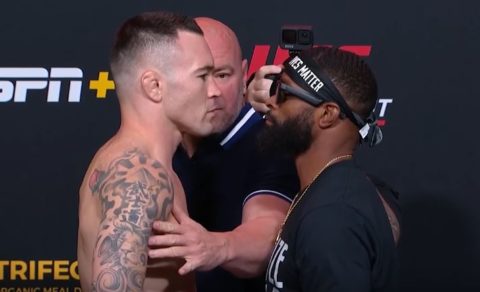 When fight night arrived, Colby Covington got the last laugh. His “third lung” was on full display as he maintained a relentless pace, mixing his underrated striking with perfectly timed takedowns. He looked great. Tyron Woodley, on the other hand, looked the same way he looked in his last two fights: lifeless. The narratives coming out of the fight were that of Covington leaping back into title contention, and of Woodley perhaps looking down the barrel of hanging up the gloves for good. I mean, that’s what we’d like to be talking about at least. But one google search of Covington’s name (at the time of writing this article), and it’s either “Covington receives a call from Trump following the victory,” or “Colby Covington rips ‘woke athlete’ LeBron James.” Once again, that political baggage isn’t merely part of the story, for many, it is the story.

Speaking of LeBron James, he’s firmly taken a stance in support of black lives matter, as have the NBA, and many other major sporting organisations (however much stock you put in these gestures). Taking a knee, minutes of silence, and anti-racism slogans taking the place of the usual Coca-Cola billboards, 2020 has seen politics, for better or for worse, become commonplace in the sporting world. And while these well-intentioned showings of solidarity are more… um… subtle… than Colby Covington declaring himself the literal embodiment of capitalism, they are political nonetheless. The sort of gestures that just three years ago landed Colin Kaepernick in the crosshairs of many a gun-toting patriot is now just part of the viewing experience.

As for where I stand? I’m honestly not sure. However empty these corporate gestures may or may not be, I haven’t an issue with one minute of kneeling before a football match. And I massively respect Bobby Green using his two minutes on the microphone following a victory to talk about issues that matter to him. But I can’t be the one who cringed a little as the social turmoil of the outside world spilled over into the octagon last Saturday, or who doesn’t enjoy serious issues that affect people being used to promote a fight. Like I said at the beginning, this lovely MMA bubble of ours is meant to be a place to have some fun and watch some fights. But as political tensions continue to boil in the coming months, maybe politics will set up camp for good in our aforementioned bubble. It’s hard to know exactly how to feel about it. The one thing I do know though? We better get used to it. 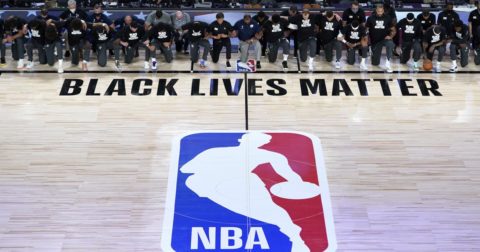