The card is headlined by Cory Sandhagen and Marlon Moraes, whilst also featuring big names like Ben Rothwell and Edson Barboza

Despite the names on the card, for many UK MMA fans, the main event for this weekend’s UFC Fight Night is the second outing of Wigan heavyweight Tom Aspinall.

The Team Kaobon standout is set to be the second fight on the main card (which starts at 1 am)  expect to see Aspinall make the walk around about 2 am.

Getting on the many current speeding hype trains is always difficult but at heavyweight, where one shot can often change things, it is even more so. That said, Tom Aspinall was the one who landed that shot very quickly in his first fight, needing just 45 seconds to knockout Jake Collier a couple of months ago. He laid Collier out with a picturesque right cross that was honed when he crossed over into the professional boxing ranks and served as a sparring partner for “The Gypsy King,” Tyson Fury. That bout also took place on Fight Island, meaning Tom is already familiar with the venue and the protocol, something that should stand him in good stead tonight.

Tom is someone fans of the heavyweight division should probably familiarise themselves with. He is a very heavy favourite tonight and there is a very real possibility that the British knockout artist is going to become a fixture in the Top 10 and an entertaining fighter to keep an eye on.

The 27-year-old went 6-2 on the regional circuit before arriving in the UFC, returning from an extended hiatus to register a pair of first-round stoppage victories in 2019. That was before debuting in the Octagon earlier this year.

Saturday night in Abu Dhabi, Aspinall shares the cage with French newcomer Alan Baudot, who’s been called in as a late replacement for Serghei Spivac, who withdrew last week.

Aspinall is an imposing figure in a division that is filled with them and trains with an elite camp in Liverpool under Colin Heron. The potential is there for him to string together a couple more victories, land himself a spot in the rankings, and a date with an even more established foe, especially if he can replicate his debut performance in his second outing ‪on Saturday evening.

Tom has already come a long way in his relatively short career. He continues to see himself coming out of the shadow of teammate and good friend Darren Till. It will hopefully be a short night at the office once again and I can see him making short work of his short-notice opponent.

We wish him the very best of luck on his quest to victory. 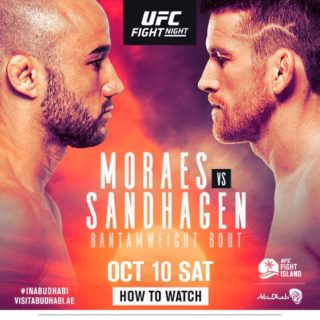