BRAVE Combat Federation will return to Bahrain for two special fight nights following the conclusion of Kombat Kingdom. The first card, BRAVE CF 44, will take place on November 5th, and will be headlined by a Lightweight world title fight, as champion Cleiton ‘’Predator’’ defends his throne for the first time against top contender Amin Ayoub.

In the co-main event, former Welterweight world champion Abdoul Abdouraguimov will look to continue his road towards a trilogy fight with reigning titleholder Jarrah Al-Silawi. ‘’The Lazy King’’ will lock horns with another submission artist in Louis Glismann, who is coming off a huge victory over Henri Lintula in the main event of last August’s BRAVE CF 37.

Also set for BRAVE CF 44 is a pivotal Lightweight match-up as 2019 Breakout Fighter of the Year John Brewin takes on veteran Rolando Dy in a true clash of generations. At Middleweight, Mzwandile Hlongwa, who beat Jeremy Smith in a Fight of the Year contest back in December of last year, returns to meet Dom Schober, from Austria.

In total, 10 nations will be represented in the BRAVE CF 44 fight card, as the fastest-growing MMA organization in the world once again proves its global aspect. Fighter from Brazil, France, Denmark, New Zealand, Philippines, Austria, South Africa, Russia, Pakistan, Luxembourg, Bahrain will all be in action on November 5th. 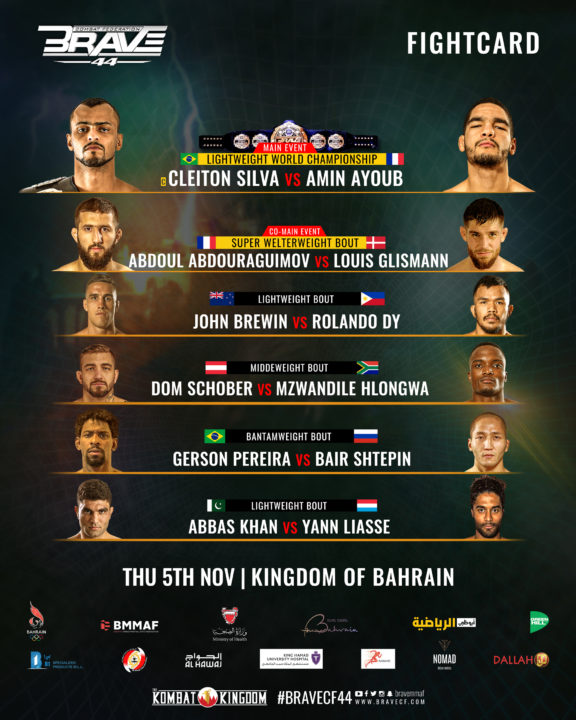