What Becomes of Colby Covington?

With Donald Trump soon to be out the door, the most hated man in the sport finds himself at a crossroads

As I write this article, the final curtain has fallen upon perhaps the most tense and divisive US Presidential Election in history. Days and days of anxiously refreshing the news feed to see a candidate’s vote count go up or down by 0.1% have finally come to a close, and Democratic nominee Joe Biden has been declared the winner by split decision and taken Donald Trump’s US President championship belt (or something like that). If you’re reading this, then you have WiFi, and therefore already know all of this. So, why am I talking about it on an MMA website? Well, that would be because Donald Trump’s defeat has significant consequences for one particular member of the MMA world. A man whose support for “The Donald” has been so strong, and in turn rewarded, that it turned him into one of the sport’s biggest stars.

You guessed it: Colby “Chaos” Covington. The most hated man in all of MMA. Now, Colby is far from the first person in the UFC to publicly voice their support for Trump. From Dana White’s storied relationship with the prez, to Colby’s teammate turned bitter rival Jorge Masvidal giving a speech at an event hosted by Donald Trump Jr. While other sports rushed to embrace Black Lives Matter, the MAGA ideology became quite at home in the UFC. There’s a difference with Colby, though. For as much as other fighters expressed their positive view of Trump, it was merely that: a political view. For Colby, it was everything.

Colby Covington saw to it that he wasn’t seen as just another right-leaning fighter. Through an unprecedented dedication to his gimmick, Colby became Donald Trump’s sports mascot. What started with just a couple of offensive remarks and star wars-spoiling tweets to enrage the “nerds and virgins,” quickly became a carefully constructed identity as Trump’s number one fan. An identity so detestable, he thought, that all the media, all the anti-Trump fury, and all the attention would revolve around him.

To the chagrin of his haters, it worked. Perhaps beyond Covington’s wildest dreams.

Trump took notice. Inviting Covington to the oval office, on stage at campaign rallies, and even personally calling him minutes after he dominated Tyron Woodley just two months ago. Trump helped make Colby a superstar. MAGA was Colby’s gimmick, one that made him one of the top 15 most talked about names in the sport. 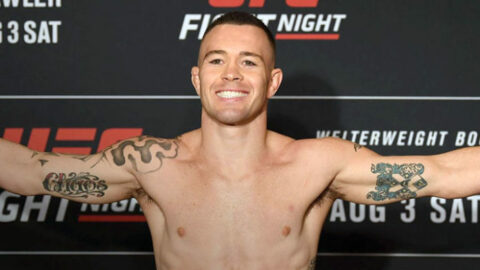 Then, Trump lost. And if you know anything about gimmicks, whether it’s MMA or pro-wrestling, it’s that they only work as long as you’re winning. That’s where Covington and Trump went hand in hand: as much as people religiously tuned in and prayed for their demise every day, they just would not stop winning. They were the supervillains on top of their respective worlds, and the screams from the haters were merely their theme music (to paraphrase Kanye West). This is not the case anymore though, and that’s what makes Colby’s future uncertain.

Now, don’t get me wrong, he is without question one of the absolute best fighters in the world, and I’ve no doubt he will continue to steamroll through many a top welterweight. Competitively? Covington is going nowhere. But singing the praises of a disgraced former president just doesn’t have the same bite as being the poster boy for the king that everybody despises. Colby personified the Trump agenda, and it pained people to watch him get the last laugh after every fight; just as it did each time that Trump came out on top over his political adversaries. That’s what made his schtick so very effective. But the Trump brand has now taken a beating at the hands of Joe Biden, and in turn, so has Colby’s.  The man he built his empire of hate around has fallen, and Trump’s favourite fighter is at a crossroads.

My guess? I think Colby goes back to being the star wars-spoiling arsehole he was before all of this. We all know the story (or at least Colby’s version) of what lead up to that infamous ‘filthy animals’ promo in Brazil, and how it supposedly saved him from being cut from the organisation. So it’s not hard to imagine that he’ll simply put that sloganed red hat on the shelf, and return to the aforementioned headline-grabbing offensive trash talk. No big deal. But alternatively: could a Colby Covington face turn be on the table? Is such a thing even possible? I honestly cannot say for sure. If you are to believe that his gimmick was just that, a gimmick, then maybe you’d have no problem with Covington shaking his opponent’s hand and saying “thank you all for coming out tonight, make sure you always follow your dreams!” But for many including myself, the man crossed those lines and burned those bridges. He went far beyond being a Bisping-Esque lovable dick that we love to hate. The hate was all too real for Colby. And that’s what makes his future so intriguing. As I said, he’s a killer and he’s here to stay. But the era of “Chaos” may well be over, and it’s hard to say what becomes of the man behind the red hat. 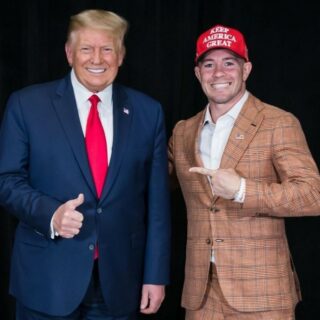 Across The Pond Profile: Sherrard Blackledge