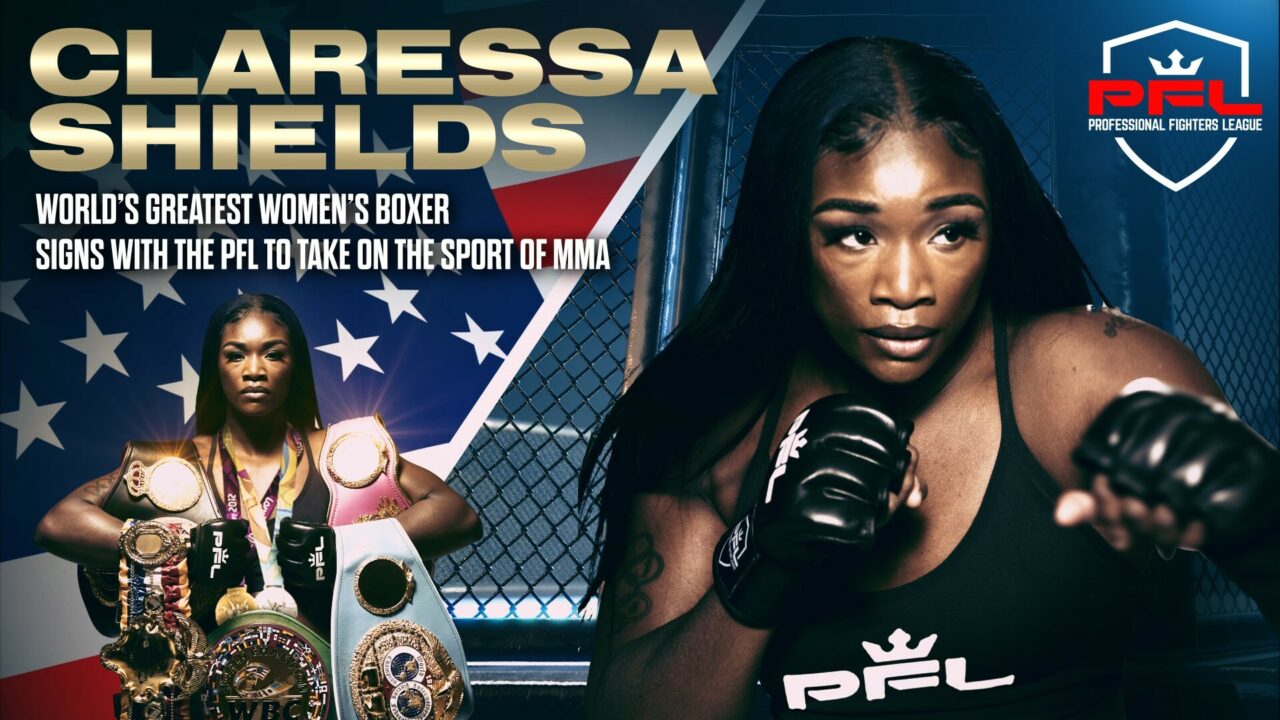 Professional Fighters League (PFL), the fastest growing and most innovative league in the world, today announced the signing of Claressa Shields, considered the best female boxer in the world. The 25-year old American is a three-division boxing world champion and two-time Olympic gold medalist. Shields, who has won all 10 of her bouts since turning pro after the 2016 Games, chose to make her MMA debut in the PFL, and will look to enter the 2022 PFL Season after a series of special attraction fights in 2021.

Shields is the consensus number one female pound-for-pound boxer in the world today, and has long expressed her intentions to compete in the sport of mixed martial arts as well, with aspirations of becoming the greatest two-sport athlete of all time and simultaneously holding world championships in boxing and MMA. In addition to her two Olympic golds, Shields is a two-time amateur world champion and the fastest boxer to earn titles in three different divisions.

Apart from her accolades inside the boxing ring, Shields is an advocate for youth development and women’s rights. In 2016, Shields was voted as the SportsWoman of the Year by the Women’s Sports Foundation, founded by Billie Jean King.

“I am thrilled to announce that the PFL has signed Claressa Shields, a two-time Olympic Boxing gold medalist and three-division pro boxing world champion,” said Peter Murray, CEO of the Professional Fighters League. “She has transcended sports and has become a global icon, and an inspiration to aspiring young athletes. Claressa is an incredible human being, a bonafide star athlete, and has an amazing story.”

“Claressa will continue to box professionally as she embarks on her multi-year PFL MMA career. Fans will get to experience her professional MMA debut in 2021, which can be seen across the United States via ESPN, as well as in 160 countries all over the world,” Murray added.

“I want to thank Professional Fighters League and Peter Murray for believing in me and giving me this amazing opportunity. What drew me to the PFL is that it is definitely a fighter-first organization, and I can’t wait to be a part of that. Since turning pro it has been my goal to be the GWOAT and to be a two-sport star like Bo Jackson and Deion Sanders,” said Claressa Shields. “I want to go where no man or woman has gone and hold championships in both boxing and MMA at the same time. The one-two punch of PFL in MMA and Salita Promotions in boxing will allow me to continue to show that there are no limits to what a woman can do. I can’t wait to get to work!”

“We are delighted to enter MMA with the PFL — an innovative, progressive organization with the most compelling format in the industry,” said Shields’ manager, Mark Taffet. “Claressa is a once-in-a-lifetime athlete who has already accomplished in boxing what no man or woman has ever done. She now looks to continue to make history by becoming the first man or woman to hold championships in both boxing and MMA simultaneously. Now, with the PFL in MMA and Salita Promotions in boxing, she will be able to do that on a global stage while continuing to grow her worldwide audience of fans.”

The PFL’s 2021 season begins on April 23, with the Regular Season continuing on April 29, May 6, June 10, June 17, and June 25. The 2021 season features the return of two-time reigning PFL Women’s Lightweight Champion Kayla Harrison, who is also a two-time Olympic gold medalist in Judo.