Matt McLachlan is a Rio Grappling affiliated Purple belt who runs his own personal training sessions for BJJ, Muay Thai and Kickboxing out of MMA Evolution. I caught up with him to discuss his training, meeting Rickson Gracie and how his mindset has adapted over the years.

Larry: Hey Matt thanks for letting us interview you for the site.

Matt: No problem. My pleasure.

Larry: Ok so tell me about how you started in BJJ? What attracted you to it?

Matt: I was working in Kibble school from 2004-2008, and in 2007 I met John Mckean former instructor at Krauseworld. We became fast friends, and opened our first full time gym “Paisley Academy”. We got in touch with a young Brazilian guy with long hair & a rucksack who had only just arrived in Scotland. He didn’t have anywhere to teach & wasnt affiliated to any gym in Scotland at the time I don’t think. We did a private lesson with him & fell in love with the art. His name was Marcos Nardini.

Larry: That’s amazing. So you’re first taste of it was from Marcos? What were your first perceptions of BJJ through that initial lesson?

Matt: That was my first exposure to the art. I felt absolutely hopeless. Powerless. It felt like voodoo. It was a divisive moment for me…I could just have put my TKD black belt back on & tried to fool myself I didn’t need to learn this stuff…as it was very humbling. But I would have been putting myself on a sugar pedestal & the rain clouds were gathering. Or I could put a white belt on and start from the very bottom. I was obviously gonna choose the latter. 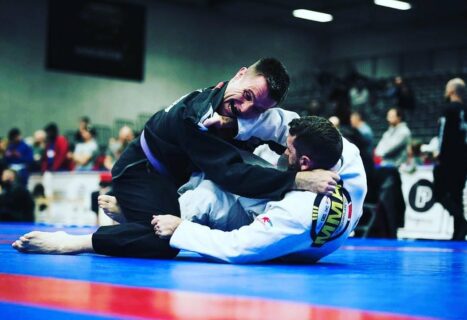 Larry: Coming from a different discipline and then training BJJ, to move from a striking background to more grappling there must have been a great shift in mindset I’d imagine?

Matt: I actually felt I had wasted (most) of my time training TKD and kickboxing, as i was taken down easily, immobilised & made to tap, negating most of my striking skills. I of course realised in time, that many of the skills & attributes I had learned in the previous 13 years were of course transferable, and BJJ was adding an essential element to my game. But yes, at the start it was a hard pill to swallow.

Larry: Another handy skill to have in the tool box so to speak. How long have you been studying BJJ now Matt?

Matt: I started in 2007 like I said, but I wasn’t consistent, especially at the beginning. We messed around with various BJJ guys, a purple belt guy called Dennis (& some others) before meeting & training consistently under Rick Young. I also had a solid 3 years out at blue belt. A seminar with Rickson Gracie inspired me to get the gi back on. Since then I haven’t looked back.

Larry: 13 years is a good innings so far. What was it like to meet the maestro Rickson? A no doubt game changing experience to learn from an icon?

Matt: Rick (Young) is his friend & we would go for a coffee & he would talk warmly about Rickson & Kron (who he’d known since he was a kid) so it was fascinating to eventually meet & train with him. His presence filled the room.

Larry: I can imagine. To meet with someone as skilled as Rickson and even be so close to the source of this wonderful art. I’m envious for sure. So you’ve been a coach for a while and have now moved into private lessons, tell me little about why you opted to move away from full class training?

Matt: First I should probably tell you how I got my blue belt…3 times!

Larry: Please do. How did you get it 3 times?

Matt: Well….John and I went to a Royce Gracie seminar in 2007. Royce was an imposing figure, warming up & stretching, stone faced, watching everyone coming in. I had met his brothers Royler & Rolker in Rio the previous year in Brazil on my honeymoon. I was just gonna show him my picture with them, and as I was the only one looking at him he broke out in a big smile & waved me over. He loved the picture & wanted to chat but the seminar had started to fill up. Anyhow, we loved the seminar and I ended up paired off with a young while belt who truthfully seemed to know even less than me. So every time Royce walked by I was dominating him or choking him…no measure of my skill I assure you. At the end he said to John & I “put a blue belt on”. We were over the moon skipping up the road in our innocence. Then we attended a seminar at The Griphouse (must’ve still been 2007) with Rodrigo Gracie (I think) and there was rolling at the end & I got fucking demolished. I wanted to throw the belt in the Clyde! Anyway, fast forward a few years down the line, started again at white belt training with Rick Young a 4 stripe white belt and we go to another seminar with Royce. At the end of the seminar he tells us to ”put a blue belt on” again. He obviously hadn’t remembered me from last time…I now had a beard at this point. Needless to say, it was an honour, but I stuck with the white belt. When I eventually got my blue belt from Rick Young I felt I had really earned it. 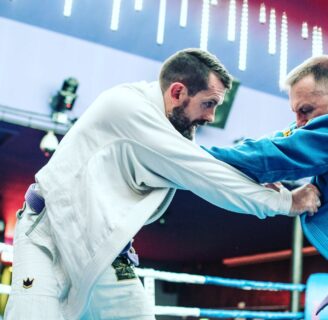 Larry: That’s a fun story man. You’re definitely a humble guy when it comes to the occasionally gentle art. Looking through your Facebook videos, I can see also you take a lot of stock in being an older grappler and the balance needed to keep training. How has your game in a sense changed through the years?

Matt: It’s taken me a while to accept that I’m not 21 and recover like I’m 81. I try and vary the heavy rolling sessions with stretching, mobility, padwork, bag work, kettlebells and running but occasionally still get it wrong, overdo it & hit the wall. Train smarter not harder. Of course BJJ is out for now, but still use the solo drills for mobility.

Larry: So to circle back what made you move from running full classes to just focusing on private lessons?

Matt: I saw this coming at the start of the year. I fought in the Euros in January (can’t believe that’s almost a year ago!) then I competed in the London open in February, then the Manchester open the next day…then it was just BANG! Lockdown. I just knew how bad it was gonna be for BJJ as there’s no getting around the proximity issue. Realistically we can only really resume when social distancing is abandoned. I knew gyms & martial arts schools were in trouble. So much so, I changed my Instagram name from “McLachlan’s BJJ “ to MMA Evolution & went back to my roots, teaching kickboxing & Thai (which we were still allowed to do at the time). I’m finished with running gyms, teaching classes & maybe even seminars. I have a full time job that I love, & teaching 1:1 lessons is perfect, as it fits around my life now at times I want to be available. The students I teach have all my attention and therefore are developing extremely well. I always felt having 30 students in a class created a good buzz & was enjoyable, but I simply couldn’t spend the time with everyone I would have liked to. Now I can. 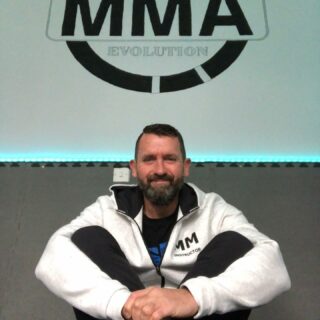 Larry: Very interesting. I’ve gotten to speak to a few competitors and ask this question but as a coach do you see BJJ changing in 2021? With a lot of gyms changing the way they coach what new practices do you think will be implemented going forward with an uncertain future?

Matt: I think it’s gonna be all different now. I honestly don’t know when & how we get back to “normal” in BJJ. We are in each other’s intimate space, not just personal space and rolling is an intrinsic part of the art. BJJ isn’t really BJJ without it. I’m not rolling wearing a face mask and there’s no point if your partners sweat drips into your eyeball. With all the temperature checks, wipes & cleaning in the world, we can’t get away from the fact we are in grappling range. I wish I could be a bit more positive & just hope I’m wrong. Another year off? What kind of state will gyms (that are still open) be in then?

Larry: I think the sort of stop start is hard and we want to support our gyms but can we see people keep paying and not being able to roll until 2022? It’s such an intrinsic part of growth in the sport isn’t it!? Also I don’t think it’s a necessarily negative way of thinking rather than just being pragmatic. The last question I like to ask is just what you consider your accomplishments in your training and BJJ journey?

Matt: I feel probably getting my purple belt from Marcos. I’m always full of self doubt & never think I’m good enough. I suppose that’s what keeps me pushing on. I’m a serial bronze (& silver ) medalist. I hope all my best achievements are in front of me! I just want to get back to rolling & competing as soon as possible. I was promoted to purple belt in 2016, so if I get my brown belt before I’m 50 I’ll be happy. I suppose I’ll just be happy to be alive at 50!

Matt: Cheers. All the best!

Evolution Of Combat Announce 4 Events For 2021