Majid: Hi folks this is Majid on the MMA UK BJJ Show and I am joined by James Jimbo Scott who is also known as the White Pudding Warrior. James, how are you this afternoon?

James: All good mate. Drank too much and ate too much over Xmas, but thankfully I also do that every other week of the year, so I’m used to it.

Majid: Lol, How much are you sitting at right now and was Santa good to you?

James: We got as high as 98kg at the lowest (highest!?) point but now at about 95. Santa is always good for me; I’m very lucky!

Majid: Yeah Santa was good to me too. I love Christmas. In my opinion the best holiday of the year, especially, in these uncertain times. On that note, how has the COVID-19 pandemic affected you in terms of training? Have you done alternative training during the last 9 months?

James: I hate Xmas, but I’m a grumpy bastard. Well, when I saw I was 98kg, it was a wake-up call. Sadly the government have made it a mission to villainise gyms, but even though I haven’t been able to do BJJ, I did start running for a while, and I’m lucky to have some really good teammates who ran with me.

More recently, I’ve started doing circuits at the gym with some of the team which are horrible but good in the long run.

I never did any other training when I was in my BJJ heyday, so it’s all new to me, but have to adapt as we can’t train. And looks like we will only be able to train outside for the foreseeable.

Majid: Yeh totally agreed. I think its a uphill struggle for BJJ gyms at the moment. When was the first time you encountered BJJ/submission grappling? Was it through MMA events? Or did you just transition from another martial art?

James: Well when it comes to my martial arts history, I did karate when I was 6. Lasted about three months, but did get a yellow belt under the Scottish Samurai Ronnie Watt. So it’s fair to say I was a striker before a grappler.

I discovered ufc when Brock Lesnar went over. When I heard he went over, I thought it was another wrestling promotion, I’d never even heard of MMA. I bought ufc 1 on dvd, as I like to start from the beginning, and saw a small Royce Gracie destroy everyone. I’d always suspected most martial arts were BS, and it was interesting to see it confirmed.

So I googled bjj Aberdeen and was very lucky to find the club I’m still a member of, I believe I started in 2009

Majid: Ahhh some very interesting points here regarding your initial foray in to Karate. What attracted you to the club that you started BJJ at? What is the club called?

James: To be honest, it was the first one that came up on google. It was called aliveness gym Aberdeen, and it had links to SBG, and it’s had a few names, and it’s now SBG Aberdeen. We were sbg before it was cool!

The people at the club, many of which are still there, were very welcoming and helpful. I do feel bad and often think to myself, how many people have gone to a terrible club their first time, and it’s put them off for life?

Majid: Yeah thats a good point. Many unknowing people go to ill prepared coaches which hurts their experience and possibly gets them off the path of their martial arts journey. Has Ross always trained you from the start or were there other coaches?

James: There were other coaches at the time, but Ross has always been happy to help even when he wasn’t the head coach, which he is now. It wouldn’t be a stretch to say I owe the vast majority of what I’ve achieved to him

James: Well in bjj I just wanted to, to quote everyone in ufc 1, “test my skills”. The first time I competed I got papped but I loved it.

As for MMA, truth be told I just wanted to live out my pro wrestling dream and have a walkout theme! 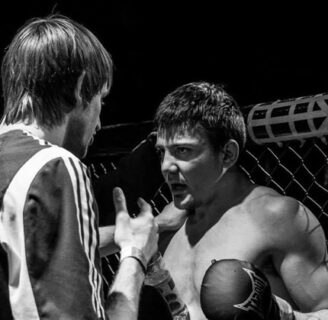 Majid: I am creasing myself. What was your first BJJ event? And can you list some of your competition achievements?

James: It was one of the Scottish ones. I hadn’t trained long but my team mates convinced me to try. It was a 0-0 draw and I went out. I did that really pathetic thing where I claimed “he was strong”. Thankfully I evolved past pathetic excuses quite quickly.

As for achievements, it’s probably more a case of quantity over quality. I always showed up.

My favourite medal would be my bronze medal from naga though, considering everything that transpired 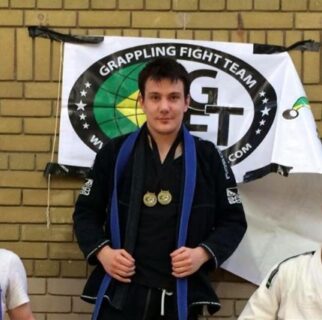 Majid: Who was your toughest opponent on the mats or in the gym?

James: There were two guys who If I saw them in the bracket I knew gold was off the table and that was – stevie ray and Louis corazza. I faced Louis in the semi final of naga and didn’t even bother, realising I was better to save my energy for the semi, as I was guaranteed to lose.

The ref saw my dismal effort, and before the bronze medal match, he asked if I was sure I wanted to have the match as “the opponent was quite good”. His heart was in the right place, but quite scathing. I won by flying triangle, much to the amusement of the Scottish contingent

In the gym, there’s loads of people better than me, but if forced for one name, anyone who trains at my gym will tell you the same – Cowpy!

Majid: Cowpy as in Cowperwaithe made me call him my dad in 2 competition matches at Newcastle in 2016 so I feel your pain. I see that you are a big pro-Wrasslin mark. Who are the wrestlers that make up your mount Rushmore of wrestling?

James: My first comp at purple belt, I won a few matches and thought I was Archie. Then Cowpy gave me a pasting haha.

As for the Mount Rushmore.

The greatest of all time is The Undertaker. Not even close. Then there’s quite a drop off to the next three.

I’ll go Hogan, Austin as the next two, then there’d be another drop off

I think the logical next one is Flair. But I was never that big a fan, and it’s my top 4 so in the absence of a clear 4th name, I’ll just pick my favourite – Goldberg. 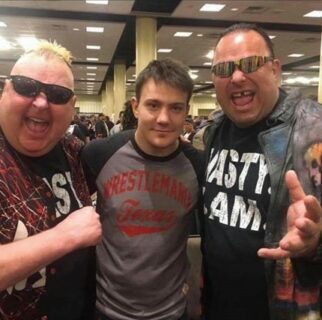 Majid: Yeah I agree with you on the majority of those names. Which MMA or BJJ athlete do you model your game on?

James: Well anyone whose seen my vicious stand up (have I mentioned my 1-0 Muay Thai record?) would probably expect me to say someone like Wanderlei Silva or Mirko Cro Cop, however in my first MMA fight, I took my opponent down, and forgot it wasn’t bjj, threw an overhand right and spent the whole round in a triangle, and got my eye closed. It was then I decided I wouldn’t take a risk ever again. So my MMA style was probably most similar to Jon Fitch

But for all the lay and pray comments I received, in bjj, most of my wins were actually subs, and I did ok in sub only too. But in points bjj, when you might have 9 matches in a day, why go balls out chasing a sub, when you can win by an advantage?

Majid: I totally agree. I am known to be a staller in competition matches which has hurt my fragile persona but winning by advantage and winning by 30 points is the same for me lol. James, what are your short term and long term plans moving forward?

James: Short term I’d just like the government to wise up and allow bjj again, and I’d like to get a regular training routine again. Long term I’d like to win one last gold medal so I could end competing on better terms

Majid: Well over 50 gold medals is very impressive James but for you to still be motivated to achieve more is very inspiring. How long were you out of BJJ training before going back again?

James: I was out for about 4 years in total. Which is a very long time. On going back, I learnt that my game was very dated and effectively had to start again. But it was getting there before lockdown, and with the environment at my gym, it’ll come back if I put the effort in

Majid: I really like the look of your gym from the pictures Ross has put up on Facebook. Do you want to share a parting message for the readers? For example, new starts in BJJ.

Please always remember if you lose in a comp match, the only reason is that your opponent is better at bjj than you. Nothing else. (Assuming you have a competent ref)

Majid: That is a great message James. James, I want to thank you on myself and on behalf of the UK BJJ Show team for taking the time out to participate in this interview. I wish you all the best in your future endeavours.