Jiu-jitsu in Scotland before coronavirus was riding high with a lot of hot prospects coming through. Both male and female prospects who have been training hard and building up to 2020 which would have seen a lot of international medals coming to Scotland but unfortunately Covid came and put this on hold.

One of these prospects is Aberdeen Combat Centre blue belt, Calum Burke. Having seen Calum over the last few years on the scene in Scotland he is for sure going to do things in BJJ which is going to push Scotlands profile up even more.

Stuart: Thanks for taking the time to speak with me Calum.

Stuart: So can you tell everyone where your BJJ journey started and what got you into it?

Calum: Well I did Kickboxing and Tae Kwon Do for a few years from around 11-14, then I stopped for a while and joined my current gym when I was 17. I did Jiu-Jitsu, Wrestling, MMA and sometimes Thai Boxing when I first started, but I found Jiu-Jitsu to be the most enjoyable for me and it’s slowly taken over my life since.

Stuart: What were your first thoughts about jits when you did your first lesson as it can be quite strange for new people coming in?

Calum: I had been a pretty big fan of the UFC for a while before my first class so it wasn’t too weird for me. I just remember how hard it was to grasp the most simple of techniques when I first started. In one of my first classes I was paired with Chris Nicol for drilling and I was just so embarrassed at how long it was taking me to grasp the technique despite Chris’s best efforts to explain it to me. 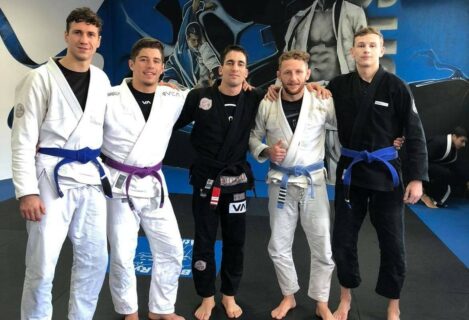 Stuart: That’s the great thing with jits, sometimes the easiest moves can be the hardest due to the different transitions. How long did it take for things to start to click for you?

Calum: I think things just progressively got easier with time. I like to talk about ‘Jiu-Jitsu IQ’ with guys in the gym that struggle to grasp some of the more complicated techniques that are taught in class. I say how it’s not a fixed thing, and the more you challenge yourself by trying to learn complex techniques the higher your ‘Jiu-Jitsu IQ’ will become, making it easier to grasp other complex techniques in future. That’s why it annoys me when people say ‘oh I can’t learn that, it’s too complicated for me’ because when I first started I couldn’t grasp the simplest of techniques. It took about a year of Chris Nicol trying to show me how to do a Berimbolo before I hit it on anyone. Compare that to now where I can grasp pretty complicated techniques relatively quickly. I don’t have any sort of talent at understanding Jiu-Jitsu, I just put the time into challenging myself to learn new techniques.

Stuart: I love that way of thinking. You are definitely in Scotland part of a new breed of young jits practitioners coming through where you are challenging the old ways of jits. In regards to challenging yourself, when did first compete and was it something that you always wanted to do.

Calum: Ah thanks, man! My first and last competition at white belt was April 2017. I hated competing then, (hence why I didn’t compete again for almost 2 years) and I still hate competing to this day. I force myself to compete now though because I know it will point out any glaring technical or strategic holes in my game and without competition in the back of my head I maybe wouldn’t train as hard as I do. Also, because Jiu-Jitsu is all I want to do with my life at this point, so to promote myself as an athlete and to make people want to learn from me when I make a living from Jiu-Jitsu further down the line, competition achievements are going to be necessary. I’ve not competed as much as I want to in the past couple of years though, so I’m going to try to compete as much as possible, especially outside of Scotland once things open back up again.

Stuart: I always look forward to seeing you competing as I believe that you and potentially a few others coming through are destined to be future world champions.

I always enjoy seeing you and Chris as well when you have visited Glasgow for open mats. Is it important for you to be able to travel to other gyms and train with different people?

Calum: Thanks mate, still a ton of work to be done for that to be the case though.

Likewise man, the open mats around Scotland during Christmas time were probably my favourite part of the the festive period the past couple of years, so I was gutted about them not being on this year.

Yeah absolutely. Periodic trips to other gyms are are super important to me for a number of reasons. First of all is to just be exposed to different body types and styles of Jiu Jitsu. The styles of Jiu Jitsu that you come across at different gyms can vary a lot. You may be really good passing de la riva and and x guard, because that’s what most people at your gym play, but you go to another gym and where everyone plays collar sleeve and lasso spider and you get triangle’d left,right and centre. So hopefully by training at that gym you’ll better understand being in those positions and how to deal with them, so that when you come up against a good collar sleeve player in competition, your confident in what to do. Another reason is that it simulates competition to a certain degree, because your a little nervous not being at your home gym, and you won’t have a clue about the style of Jiu Jitsu of certain people you roll with which is just like competition. So you get to develop that skill of figuring out your opponents game on the fly which you don’t get at your own gym. Another reason is just that I have a lot of friends at other gyms. I like to go the Griphouse as often as I can for the great training, but also because they’re all super friendly and it’s nice to catch up with everyone.

Stuart: Jits certainly does that now, no politics.

When I first got into BJJ one of the people I looked up to for inspiration was Renzo Gracie. Who are the people you look up to?

Calum: Good question! These’s tons of guys that I look up to and love to watch but I’ll try stick to the ones that have had the biggest impact on me. For a long time the Mendes Brothers were by far my biggest inspiration. Ever since I saw that highlight videos of Rafa and Gui making a fool of everyone at the Rickson cup I was obsessed with them. Over at least a two year period me and Chris pretty much exclusively learned from the Art of Jiu Jitsu website. I was planning on going to train at Art of Jiu Jitsu last summer but I had to cancel because of the corona situation, I am hoping to go next summer though. More recently I’ve been learning a lot from Jon Thomas. I played a lot of lower body guards like De La Riva and X Guard from watching the mendes bothers, but wasn’t great at any upper body guards. But after watching a lot of Jon Thomas I feel like my Collar Sleeve and Lasso Spider guards are just as good. Another guy I look up to a lot is Leandro Lo. Especially when he was at lightweight and middleweight but I enjoy watching him today too. Over lockdown I worked on my guard passing a ton with Leandro Lo being a big inspiration. His style of knee cut’s and toreando’s are a staple of my passing now.

Stuart: Some great people there to look up to.

What advice would give anyone that is looking to get into jits?

Calum: First of all pick the gym in your area that matches up with your reasons for wanting to get into the sports. Do you want to become a good competitor? Do you want to transition to MMA one day? Or do you just want to train in chilled out environment and keep fit? Once you start, for the first while at least, just focus on showing up and enjoying each training session because the first few months are when most people quit. After that point if you enjoy the sport and want to get really good at it, take personal responsibility for your learning. Don’t just expect your coach to spoon feed you everything your going to need to learn, to become a good competitor or a black belt. Learning from a coach is great but you need to be spending some of your free time learning from matches, dvds or YouTube and then finding someone to practice with outside of class if want to progress fast and have a beyond surface level understanding of Jiu Jitsu.

Stuart: What about future plans for yourself? Where do you see yourself in 5 years time?

Calum: Hopefully a lot better at Jiu Jitsu for a start haha. But I’d like to have competed in as many major and regional IBJJF tournaments as possible, hopefully with some good results. As well being on some of the bigger super fight shows in the uk. I’d also like to be making some sort of a living from Jiu Jitsu at that point, whether it be from having my own gym or by other means.

Stuart: I am excited for you when the comps start up again as I believe you have the ability to become a world champion. Also as well hopefully we can get another open mat soon, I know we rolled at one of the previous ones no gi and you kicked my ass hahaha, so hopefully at the next one we can get a roll with the gi on.

Last thing for you then Calum, anyone you want to thank for you journey so far?

Calum: Thanks that means a lot. Haha yeah sounds good to me mate! Fingers crossed everyone in Scotland can start training with each other again soon.

There’s tons of people that have done a lot for me. Everyone that’s coached me, trained with me or competed against me have helped my progression. But a special shout-out to Chris Nicol for pretty much teaching me everything I learned in my first few years of Jiu Jitsu and for still being my best training partner and a great friend. Another special shout-out to Shay Montague for being a massive inspiration for me to want to try my hand at some of the major IBJJF tournaments. As well as letting me stay at his flat multiple times so I can train with him and the guys from the griphouse, which I’m really thankful for.