Stuart ‘Stoomboy’ Henderson has trained Brazilian Jiu Jitsu since early 2014 where his journey began at Gracie Barra Glasgow. Stuart has been at Marcos Nardini Brazilian Jiu Jitsu (MNBJJ) since 2017. For a number of years Stuart has played an active role in the Scottish and UK BJJ communities through supporting athletes in big tournaments via updating others on tournament results, organising seminars with major athletes, refereeing Scottish Grappling tournaments regularly and competing regularly at BJJ 247, IBJJF, UAEJJF and SGI events. I hope you enjoy the interview. 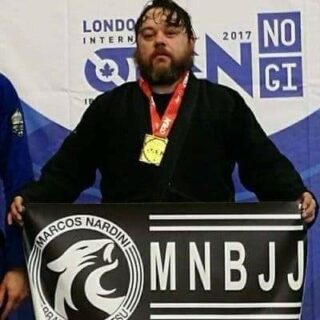 Majid: Hi guys, this is Majid Gilani from the MMA UK BJJ Show and I am joined by my colleague and Marcos Nardini Brazilian Jiu-Jitsu team member Stuart Stoombhoy Henderson. Stuart, how are you this evening?

Stuart: I’m all good brother, how are you?

Majid: That is good to hear. Yes, I am good but will be better when we get back to normality again. Stuart, can you tell the readers what your origins are?

Stuart: I was born in London many years ago hahaha. Stayed there on and off until I was about 6 or 7 then moved to Dundee. Raised in Mid Craigie in Dundee until I left when I was 18 to settle in Glasgow.

Majid: Whereabouts in London were you born?

Majid: What do you think about the current pandemic restrictions imposed on training by the government? Have you been doing alternative training to BJJ?

Stuart: The current restrictions for training are crazy. In Scotland, we have tried everything to get the government to listen to us. We started writing emails to MSPs and MPs, people were doing online videos, there was a peaceful protest outside Holyrood but nothing worked. Scientific proof is in our favour but it’s not being listened to. It’s a shame as we have a lot of great ideas and ways that reopening gyms would work but as I said no one in the government is paying attention. For me, I have done absolutely nothing for the last 9 months. I work from home and have done since the beginning so it’s difficult for me to get motivated to do something in the house considering I work here, eat here and sleep here.

Majid: It’s a shame and I hope we get back to normal sooner rather than later. How did you come across the art of BJJ? Did you watch any early Pride or UFC events which led to your initial exposure to submission grappling/BJJ?

Stuart: I used to watch early UFC events probably starting when Tito Ortiz was the light heavyweight champ. He initially drew me into it and then I got to see Royce and Renzo Gracie. With Renzo especially I got to see a fighter come in so confident and although he took it very seriously he also came in excited and happy to be fighting, no nerves and no fear. I loved Renzo which is why after researching him I felt I wanted to do this but life got in the way and it was a number of years before I started my BJJ journey.

Majid: Who is your favourite BJJ athlete in MMA or sports grappling?

Stuart: My favourite at the moment is definitely Rodolfo Vieira. His BJJ style is all about pressure and pushing his opponent to places they have never been. I love that style and watched a lot of Rodolfo videos to try and add it to my game.

Majid: Yeah I love Rodolfo. I think he is going to be a big player in MMA in the coming years. When and where did you start training BJJ?

Stuart: Wednesday 26th March 2014 was when my journey began. Since my late 20s, I struggled with chronic anxiety which had an effect on my everyday life. One of the big issues I had was motivation so being able to start something and stick to it. My weight at this point ballooned to 127kg which wouldn’t be so bad if I was 6 feet 5 but I am only 5 feet 4 so the weight caused issues for me. My initial plans were I wanted to get fitter and healthier.

I looked at the Griphouse in 2013 but it wasn’t my time to start as I believe to start something you need to be ready.

I had been following Ricky Gillon on Facebook for about a year and decided to message him. He said to come in for a chat. I went in and chatted with him and decided that now I was ready.

Majid: How was your time with Ricky at Gracie Barra Glasgow?

Stuart: I loved my time at Gracie Barra Glasgow. Ricky was a hell of a motivator and we would spend hours chatting about my journey and the competitions that I had coming up. He got me started and showed me the path which I am forever grateful for.

I enjoyed training there we had a real sense of family there. We had people like yourself, Matty Fleming, Jack Williamson, Mike Coia and Graham McQuiston to name but a few all of which came with a high level of jits knowledge. I remember going to my first BJJ247 comp in Scotland and we turned up with about 40 or 50 people in Edinburgh which was amazing. Everyone had each others’ back when it came to training and learning. Over time more and more people came in which added to our family.

Majid: Yeah I have very positive memories of my time at GB Glasgow where I made many friends. What encouraged you to compete?

Stuart: I had been training for about 7 months and comp was coming up which some of the guys were going to in November 2014. It was a Grab n Pull event which was now being run by Lawrence Dutton. This was the last event under Grab n Pull I believe before it changed to BJJ247. It was the Liverpool Open. At this point, I was a 3 tab white belt and I had dropped almost 30kg so was walking around about 100kg. Someone had said to me about entering so I spoke with Ricky and he said to go for it, so I entered.

I remember travelling down to Liverpool in a minibus with I think about 12 of us. I couldn’t sleep as I was so excited about what I was going to do.

I went down and fought gi and no-gi and took silver in the no-gi and gold in the gi divisions. I also entered the absolute and ended up taking bronze from it.

I was buzzing and remember in the minibus on the way home talking about what comps to do next and searching Facebook to see where my comp journey was going to take me.

Majid: That is an amazing story. By the way, can you list your competition accomplishments? And also tell us what was your most memorable time on the competition mats?

I am missing a good few off that list. 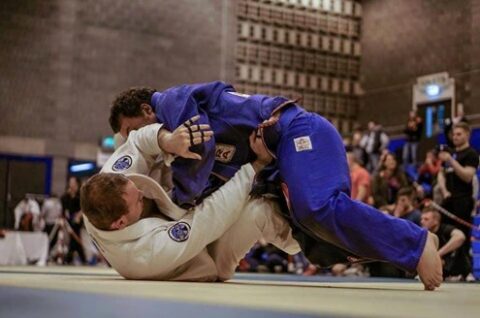 My memorable moment was definitely the IBJJF World masters in Las Vegas. To be fighting in Las Vegas was an experience which I will do again. The place was crazy with lots of spectators all making loads of noise. I was buzzing for this but fell short in the first round being beat 4-0. Even though I lost I took a lot away from it. Also been the IBJJF Europeans twice and again falling short but once we are allowed to train and compete again I will be out there.

Majid: Wow this is a tremendous list. When did you go to the Worlds and Europeans respectively? And what do you believe is your best achievement on the competition mats?

My biggest achievement for me competition-wise was the IBJJF British. It was my first IBJJF comp. To win local comps is brilliant but to win an IBJJF medal is something special. I remember after that seeing I was ranked 127th in the world under IBJJF rankings after the British hahaha. Not a big thing to some people but for me and my journey to see myself being a ranked IBJJF fighter was a huge achievement. 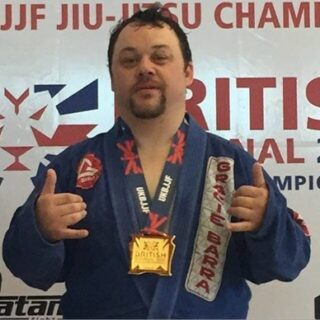 Majid: Competing in IBJJF tournaments let alone making podium is a very big deal due to the size and scale of those events. How long have you been at MNBJJ? And why did you pick MNBJJ?

Stuart: I moved over to MNBJJ in May 2017. After leaving GB Glasgow I spent a few weeks thinking about what I wanted from my journey. I was only ever going to go to 1 of 2 places which would have been the Griphouse or under Marcos. The Griphouse are well established in Glasgow and have a fantastic jits team of which I am friends with quite a few of them plus old teammates were there from GB Glasgow. Then there was Marcos who was running classes out of a CrossFit gym in Cardonald.

I had known all about Marcos since I first met him back at the IBJJF British in 2016. He had travelled down himself and I was there with a teammate of mine Tommy Munro. We had left the venue together and got chatting as he had seen a lot of stuff that I had posted on Facebook. We chatted for maybe 10 minutes or so. Marcos is very laid back and very approachable. He has a personality that draws people to him. So when I left GB I remember messaging Marcos and then going out to see him with Thomas Wilson. Our big thing was that we wanted to have a place where we can train regularly. After meeting with Marcos he advised that he had been considering opening up his own place in Glasgow and that he felt with all of us going over that then was the right time. 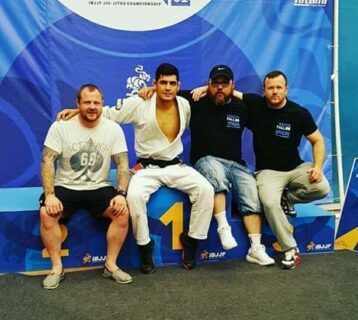 Majid: What are your short term/long term goals after the restrictions are lifted?

Stuart: Short term goals would be to get back to some sort of fitness. I started feeling great before the lockdown I had my weight down to 95kg and I was looking to get to under 88kg but Covid put a stop to that.

Long term goals are I want to win the IBJJF Europeans and the IBJJF World Masters.

Majid: These are fantastic goals and you looked in great shape but thanks to uncle Rona that has been shat on. Do you have any parting messages for the readers?

Stuart: To anyone that is reading just want to thank everyone for being a part of my journey so far. I have had people who have been positive throughout as well as negative. I look at the negative people as much as I look at the positive as both have had an impact in my journey.

A big thank you to you, Maj, for always being there. If I ever needed a chat or some advice you are always there.

A big shout out to the team at MNBJJ for always putting up with me hahaha. When we get back I’m coming for you all.

To my brothers Thomas Wilson, Peter Downs and Marco Lazzurri who have been there from day one. We have travelled all over with each other through comps, seminars and gyms.

And finally Marcos Nardini for being my coach, my friend, my brother through all the good and the bad times.

Majid: It has been a pleasure being a part of your Brazilian Jiu-Jitsu journey and been a pleasure to speak to you this evening. Thank you for speaking to me and I wish you the best of luck in your future endeavours.

Stuart: Thank you, my brother, OSS.