UFC 4: Revenge of the Warriors REVIEW

UFC 4: Revenge of the Warriors took place on the 16th of December, 1994 at the Expo Centre Pavilion in Tulsa, Oklahoma. 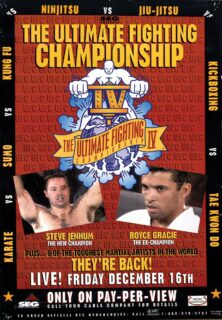 This was again an eight-man tournament with the winner receiving $64,000. The event again had no weight classes, no rounds and no judges. The only way to win was knockout, submission, corner throwing in the towel. The name of the event refers to an alternate Steve Jennum winning the last tournament at UFC 3 and Royce Gracie coming back to reclaim his title.

The commentators for the event were returning regular Jim Brown, and making their commentating debuts for the UFC were Bruce Beck and Jeff Blatnick. Blatnick was an Olympic gold medalist in wrestling and would have a lot of insight into the grappling side of the sport.

The first quarter-final matchup and of course the two-time former champion Royce Gracie is here to start the tournament with his Gracie family not far behind him for support. He is facing the oldest competitor thus far in the UFC as he takes on 51-year-old Ron ‘The Black Dragon’ Van Clief who is a 10th-degree black belt in karate.

The fight starts and Gracie gets an immediate takedown and Van Clief is in big trouble already as Gracie wastes no time in taking mount and starts landing strikes. Van Clief defends well by grabbing hold of the gi but Gracie manages to break free and land more strikes which causes Van Clief to turn to his back. This is the beginning of the end for Van Clief as Gracie makes quick work of securing the rear-naked choke for the tap out and the win.

As soon as the fight hit the ground with Gracie on top it spelt trouble for the karate veteran Van Clief, he tried to defend the best he could but as soon as he turned his back the fight was over.

Keith Hackney was another fighter returning to action after he made his debut at UFC 3 defeating 600lb sumo wrestler Emmanuel Yarborough and earning his new nickname ‘The Giant Killer’. His opponent is Joe Son the manager of Kimo who is now well known after giving Royce Gracie a tough fight which eventually caused him to withdraw from the UFC 3 tournament. Joe Son like Kimo comes out with huge cross on his back when making his way to the octagon.

The fight begins and Son is stood with his hands behind his back waiting for Hackney to commit, Hackney obliges and Son responds by taking him to the ground. Hackney rolls but Son has him in a headlock but cant work his arms under to form any submission, eventually Hackney gets back to his feet and Son pushes him against the fence. Hackney then manages to trip Son to the ground but is still in the headlock, Hackney then proceeds to punch Son in the groin which was incredibly allowed! Hackney grips Son around the throat restricting his breathing and he taps.

After the fight, Jim Brown comments that Hackney won’t have gathered any fans with his tactics in this fight, which is referring to the groin strikes on the ground. There are no rules so technically it was allowed but this was a dirty tactic indeed, the choke didn’t look that tight so poor Son probably just wanted to stop getting punched in the sack.

The champion of UFC 3 Steve Jennum is back to defend his title, the alternate of the last tournament who captured the crown after multiple injuries. Melton Bowen is a pro boxer with a record of 32-5 with 22 knockouts, Jennum will want to get this one to the ground.

They begin, and Jennum presses with some kicks, and ducks a punch before grabbing a clinch. Bowen lands some punches to the side of the head, but Jennum gets the takedown and mounts him. Jennum holds the fence for balance and starts to open up with some nice punches to the face, then lands a headbutt as Bowen tries his punches from the bottom. Bowen works from the bottom and uses his feet on the fence to power up to standing, but Jennum keeps the distance short and muscles him to the fence before delivering a nice hip throw to mount. Both guys look gassed now as Jennum lands some punches without many stings in them. Jennum just smothers him for a second to regain his breath, but Bowen tries to muscle him off, so Jennum takes this opportunity to attempt an armbar and gets it as Bowen taps.

Jennum did a good job of avoiding the power of Bowen here as he immediately looked to clinch and get the fight to the ground. Bowen looked like a fish out of the water on his back and just looked to strike rather than defend, although he did land some damaging punches to Jennum. In the end, Jennum was more technically skilled on the ground and eventually got the submission.

Dan Severn is a respected wrestler and Jeff Blatnick who is a former wrestler himself states that he is a contender for the tournament. Anthony Macias is a Muay Thai practitioner and is the hometown fighter from Tulsa.

Macias presses with kicks to open, and Severn shoots in for a double leg, but Macias avoids going to his back, and Severn slips as Macias lands some elbows. Severn comes back up and gets a single leg, up into a rear waist lock and delivers a huge suplex that lands Macias on the back of his neck. He gets back to his feet and Severn gets another suplex! Macias’ head bounces off the canvas this time, and Severn gets a back mount then works in the rear-naked choke for the tap out.

Size advantage alone made this an uphill battle for Macias but the wrestling ability of Severn made this impossible for the hometown fighter. Severn imposed his will with his takedowns and threw Macias around the octagon until locking in the choke for the victory.

The first semi-final bout was fan favourite Royce Gracie taking on ‘The Giant Killer’ Keith Hackney. Both had fairly quick quarter-final matchups and would be fresh for the semis.

They press to open, with both looking tentative, and Hackney fakes a kick, so Royce shoots in and Hackney steps off and lands a punch. Royce starts pressing with some kicks of his own, missing a high kick. He stalks Hackney and then shoots in for the takedown, but Hackney gets a nice sprawl and avoids! Royce closes in faking some punches, and finally gets a clinch against the fence, but Hackney blocks the takedown well. They step off the fence and Hackney holds his gi with the left hand and lands some sharp rights, but Royce shoves him back into the fence and lands some knees to the midsection. Hackney uses the gi to hold himself up, so Royce lands some more knees, and then pulls guard and immediately goes for a triangle choke. Hackney avoids and lands some rights, then stands and drops a good right into the guard, but Royce gets the triangle again and starts landing punches to the head. It looks like he’s got it locked in, but he can’t finish it off and Hackney escapes again, landing some more punches. Royce tries it once more, landing some elbows to the head this time, and then transitions to a tight armbar, and Hackney is forced to tap out.

Hackney put up a great fight here against the former two time champion and managed to land some great shots! He also managed to avoid takedowns and submissions also which was really impressive, but eventually if you stay on the ground with Gracie long enough he will catch you.

An announcement that Steve Jennum was out of the tournament after an injury in his quarter-final bout meant that alternate Marcus Bossett is to step in and take his place. Severn made quick work of his opponent in his last bout.

They begin and Severn blocks a kick, then catches another kick attempt and gets the takedown. He mounts quickly and locks in an arm-triangle choke for the tapout!

Another quick fight for Dan Severn and he now advances to the final still fresh having spent less than 3 minutes in the octagon.

The finals are upon us and its a classic rivalry between Brazilian Jiu Jitsu and Wrestling. Severn looks to be the fresher fighter and Gracie is looking to become the Ultimate Fighting Champion for the third time.

Royce presses with some low kicks to open, but Severn shoots in for the takedown and gets it, putting Royce on his back in full guard. Royce uses some heel strikes to the kidneys as Severn holds him down. Severn goes for the same smother choke he used to finish Bossett, but Royce punches Severn in the head to avoid. Severn keeps trying the choke and five minutes in Severn gets his first strike, headbutting Royce and then punching him a few times. Dan stands, but then goes right back into the guard where Royce tries an arm triangle choke from the bottom. He can’t get it locked so he breaks and lands some punches to the head. Severn responds with some weak strikes of his own, then goes back to just holding him. A minute later and Severn works the ribs, we’re about ten minutes in now. Severn lands some more punches, but can’t do any damage and Royce looks to prep a triangle, so Severn shoves him into the fence. Royce releases, and Severn stands, then goes back into the guard. Severn keeps pushing him into the fence, and we’re now fifteen minutes in. Royce uses the fence to get his legs up for a triangle choke, before Royce tightens the legs across the back of the neck. Severn tries to escape by standing, but that gives Royce more leverage, and he’s forced to tap out at just over fifteen minutes! Royce Gracie is the Ultimate Fighting Champion for the third time!

Dan Severn proved to be Gracie’s toughest test to date as he pretty much dominated Royce throughout the fight, he had him on his back but couldn’t inflict much damage. Gracie’s Jiu Jitsu saved him once more as he persevered and submitted the bigger man from his back with a triangle choke. Incredible!

UFC 4: Revenge of the Warriors lived up to the title as Royce Gracie came back from being injured at UFC 3 to once again win the Ultimate Fighting Championship. This was his toughest tournament to date as he had gruelling bouts with Keith Hackney and Dan Severn, Hackney showed a lot of defense against submissions and takedowns whilst Severn imposed his wrestling skills to keep Gracie down. This was a great event overall as we saw the birth of another legend in Dan Severn, all the fights were short but exciting. Another thing to takeaway from this event was the wrestling of Dan Severn, this is something that we saw rival Royce Gracie’s Jiu Jitsu. The birth of a stylistic matchup that still has a rivalry to this day!

Fight of the Night: Royce Gracie vs Keith Hackney

Submission of the Night: Royce Gracie

Performance of the Night: Royce Gracie