UFC 5: Return of the Beast REVIEW 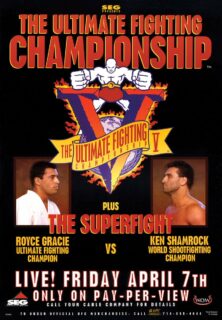 UFC 5 continued the successful format of the eight man tournament used in previous events. The tournament rules were the same as previous also, no judges, no rounds, but this time there was a time limit on fights. There was a 20 minute time limit in the quarter-final and semi-final bouts, a 30 minute limit in the finals. The method of victory was still via knockout, submission, referee stoppage or the corner throwing in the towel.

Dan Severn was back to compete in the events tournament hence the title the return of the beast. The main attraction though was a Super-fight contest between multiple UFC Champion Royce Grace and his rival and UFC competitor Ken Shamrock. This bout was to decide the first Super-fight Champion.

The referee was again Big John McCarthy and the commentators were again Jim Brown, Bruce Beck and Jeff Blatnick.

Andy Anderson is a Tai Kwon practitioner and says he’s looking to test himself against the bigger guys. Well he gets his wish as he’s fighting Jon Hess otherwise known as ‘The Giant with an Attitude’ and he’s walks in at 6ft 7 tall and calls submissions silly?

Hess charges right in with a kick to begin and starts swinging wildly, stunning Anderson. Hess starts hitting out at the back as Anderson tries a takedown, and Anderson ends up on the mat, but as Hess pounces Anderson reverses him over into guard. Anderson gets to a side mount and lands some punches, but they come back up and brawl wildly again. Hess lands some more clubbing blows, this time Anderson goes down, and Hess follows with a kick and the referee stops it there.

The bigger man in Jon Hess just seemed to overwhelm Anderson here, he was more aggressive and just rushed at Anderson really. He landed a few big strikes but didn’t show any type of skill and just came out brawling. Hess moves on to the Semi-Finals.

Todd Medina is the first fighter in UFC history that has the same style as Bruce Lee, that being Jeet Kune Do. He is facing Larry ‘Thunderfoot’ Cureton who is a kick-boxer with with 26 wins and 23 knockouts.

They begin and Medina goes for a single leg, taking Cureton down. Cureton surprises the announcers by getting a full guard and trying a guillotine, but Medina works the body and escapes the choke, before landing multiple headbutts. Medina keeps headbutting, then works the body before passing into side mount. Cureton gets a headlock, so Medina punches him in the groin, and then gets a forearm choke and Cureton taps out.

I thought that this fight would be all stand up but Medina took Cureton out of his comfort zone and landed quite a lot of headbutts. Realising that this wasn’t doing enough damage to finish the fight he went for a forearm choke and got it. Medina moves on.

Oleg Taktarov otherwise known as the Russian Bear is a Jiu Jitsu, Sambo and Judo champion and apparently hasn’t lost a fight in ten years. Ernie Verdicia is a paramedic from Miami and is a black belt in Kenpo Karate.

They circle and Verdecia closes in with a palm strike, so Oleg pulls guard. Verdecia holds him down, and Taktarov tries an armbar from the bottom, but Verdecia defends it well. Verdecia tries some punches and a headbutt as the announcers talk about how relaxed Oleg looks. No sooner have they said that when Taktarov sweeps him over to side mount, and gets a side choke for the tapout.

Taktarov kept his composure when put on his back in a difficult spot and the moment he had the opportunity for the sweep he took it and quickly submitted Verdicia. Very impressive.

Dan Severn is no stranger to the octagon after his performance at UFC 4 when he reached the final and gave Royce Gracie the toughest fight of his career. Joe Charles fought as an alternate at UFC 4 and this time competes in the tournament he holds the record for the fastest fight in the UFC thus far.

The fight gets underway, and Severn gets a quick single leg to side mount. Severn presses him into the fence and lands some knees, before Charles works for full guard. Severn stacks up in the guard and lands some punches to the body, continuing to work as Charles tries an armbar, but he’s really bloody at this point and Severn avoids it. Severn lands a nasty elbow strike, then takes Charles’ back, pulling him down into a nasty rear naked choke for the tap.

Severn looked good here as his wrestling looks unstoppable and this time he was more aggressive with his strikes. He ran through Charles here and was fired up after the fight shouting at the crowd. The beast is back.

Dave Beneteau is replacing Jon Hess who is out of the tournament with a bruised hand. Beneteau made quick work of his opponent in the alternate bout and is experienced in Judo and Wrestling. Medina looks to have a swollen eye from his quarter-final bout, maybe from the headbutts.

The fight starts and Beneteau gets a double leg to side mount, and then headbutts Medina as Todd holds on. Beneteau lands some punches, then stands before taking the full mount. Medina tries to muscle him off as Beneteau goes for an arm triangle, then changes his gameplan and sits up, wailing away with punches before Medina taps out.

Beneteau used his grappling to again find his way to full mount and use strikes to finish his opponent just like he did in his alternate bout. He will meet either Taktarov or Severn in the final who are world class grapplers themselves.

The best matchup of the night so far as skilled grapplers Taktarov and Severn meet to decide who makes it to the final to face the alternate Dave Beneteau.

The fight begins and Severn gets a headlock takedown and lands a knee, as Taktarov tries to get guard. Severn pounds away, then uses a cradle hold to pass the guard into half-guard. He lands some rights and tries to pass, pressing Taktarov up against the fence for good measure. Taktarov tries an armbar, so Severn just starts dropping heavy knees on Taktarov’s head, up against the fence. Oleg looks cut open badly, just going for the armbar upside-down and taking more knees to the head. Severn lands some nasty headbutts, then continues to drop the knees and punches, and finally McCarthy stops it there with as Taktarov isn’t defending and his face is a mess.

As predicted Severn went for the takedown and was on top, no one thus far has been able to stop it. Taktarov tried to lock in an arm-bar which left him vulnerable and Severn took full advantage with the knees leaving Taktarov a bloody mess on the ground. Scary stuff from the beast.

Here we go, this is to decide the UFC’s first ever super fight champion. Ken Shamrock who fought Gracie at UFC 1 losing by submission is back to try to get revenge, this matchup was expected to take place at UFC 3 but both fighters had to withdraw from the tournament due to injury. Royce Gracie the 3 time UFC tournament champion is back to try and win the first super fight championship.

They begin with Royce pressing with some kicks, before Shamrock gets a takedown to guard. Royce gets his legs up and lands a right hand, but Ken avoids whatever submission he’s looking for and lays close in the guard. Ken headbutts him a few times, and Royce responds with some heel kicks to the kidneys, as they spin around in the center, but nothing of note really happens. 10 minutes in and Royce lands some elbows, then both fighters are again inactive for another six minutes before Ken headbutts him again. Royce slaps him a few times as the crowd start to get impatient. 20 minutes in, Royce starts slapping him again and again nothing much of not takes place both fighters are content with their positions. We reach the 30 minute time limit, and Big John McCarthy decides to allow them another minute before halting time. They restart for the overtime, and finally exchange some blows with Ken landing a couple of good rights, causing a mouse to appear under Royce’s eye. They go back into Royce’s guard, and Ken lands a couple of headbutts, cutting his eye open badly. The fighters are again inactive and the fight ends with Shamrock on top.

After the fight each fighter hold each other’s arms up congratulating each other and because we have no judges here it will be a draw. So no Super-Fight Champion will be crowned! It seemed that both fighters respected the other and were both happy with their positions, Shamrock was happy in the dominant position on top landing strikes now and then. Gracie on the other hand was happy being inactive on the bottom which is surprising as he usually is constantly attempting submissions and trying for the finish. Gracie’s eye is all swollen and cut, if this had any judges then Ken Shamrock would have certainly been the victor. But overall a pretty disappointing display for both fighters in the biggest UFC fight thus far.

The final is here and both fighters have had time to rest as the super fight went on for so long. Beneteau looking to become the second alternate to win a UFC tournament after Steve Jennum. Severn is into his second final and will looking to win his first tournament.

The fight starts and they clinch to open, and Severn muscles him back, eating a couple of punches along the way. Beneteau drops for a takedown, but Severn blocks, and they continue to muscle around before Severn lands a knee. Severn shoves him into the fence, and gets a leg trip to side mount, where he lands some punches, and then gets a keylock for the submission win. Dan Severn is the new UFC tournament Champion.

The fight went as expected as Severn was always the favourite over alternate, although Beneteau did put up a good fight stuffing a few takedowns and landing some good uppercuts. The wrestling of Severn did takeover in the end and he finished his opponent shortly after the fight hit the ground. He celebrates with his team afterwards displaying his UFC 5 belt along with his wrestling belt.

UFC 5: The Return of the Beast lived up again to the title as Dan Severn unleashed the beast upon all of his opponents in the tournament mixing his wrestling ability with his new found aggression and striking. Once he had his opposition on the ground he wasted no time in finishing them with either strikes or submissions. The Super-Fight didn’t live up to expectation as both Ken Shamrock and Royce Gracie didn’t want to lose and therefore made for a pretty uneventful fight. Up until the last few minutes of overtime when Shamrock was able to bust up Gracie’s eye this fight was very stale in parts and we didn’t see a new champion crowned. Oleg Taktarov was another fighter that stood out and is a very skilled individual on the ground. This event was showed that wrestling is another style of fighting that is able to dominate and be effective in mixed martial arts.

Fight of the Night: Severn vs Taktarov

Knockout of the Night: Dan Severn

Submission of the Night: Oleg Taktarov

Performance of the Night: Dan Severn

Darren Till to fight Marvin Vettori at UFC Fight Night 189