by Majid Gilani
in MMA News
0

Shah ‘No Pain’ Hussain is an Icon Jiu-Jitsu Brown belt under Ze Marcello who has enjoyed an extensive MMA career fighting out of Crossface MMA. Shah has fought across 2 decades against world-class competition in various continents. Shah has done a lot of work in Pakistan and the British Asian community to raise the profile of martial arts through delivering seminars and working at MMA/BJJ events for no fee. Shah currently focuses on training BJJ and coaching MMA/BJJ. 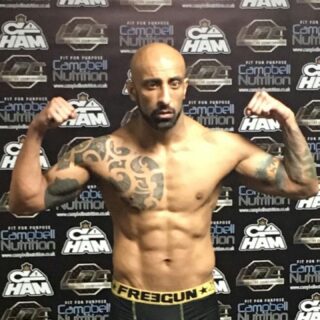 (Shah ‘No Pain’ Hussain weighing in before a fight)

Majid: Hi folks this is Majid for MMA UK and I am joined by UK MMA pioneer Shah ‘No Pain’ Hussain. Shah how are you doing?

Majid: Lol things can only get better. How has the pandemic impacted you?

Shah: I’m hoping so my man. Apart from the big change in how others go about their day to day business and a growing waistline. Not much else. But seeing the changes from March 2020 till now in respect to the pandemic, you can’t not think our beautiful nation being run by a bunch of losers.

Majid: I totally agree with you. Things could have been done better. Have you done any training to replace your normal gym regimen?

Shah: Yes, I had been training but on and off, this included putting in time on the mats too but most of this included cardio via 3 mile jogs, hill sprints and I invested in a load of fitness equipment such as resistance bands, kettlebells, dumbbells, 130kg in weighted plates and a Bulgarian bag. Because of lockdown companies and individuals cashed in but it’s been a worthwhile investment as I can’t see myself hitting my usual gym again now that we’ve got a booking system in for training slots which has taken away all flexibility. Therefore, the goal is a super gym in the back of my house for the future I think!

Majid: I think this is the norm now. When, how and where did you first encounter MMA and submission grappling?

Shah: For MMA it was watching Bloodsport starring Jean Claude Van Damme and also re-run of the advert on cable TV on ppv sports of a UFC event. I was intrigued. Then first MMA encounter was at Team Crossface in 2005. Brazilian Jiu Jitsu, I first came across in 2004 where I started training in at what was back then Ze Marcello BJJ which was affiliated with Brazilian Top Team but later on in 2010 rebranded as Icon Jiu Jitsu. 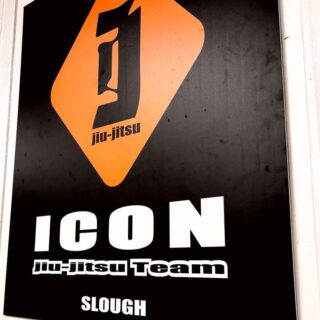 Majid: So, was Team Crossface your gateway into MMA and BJJ training?

Shah: It was actually BJJ first but I took a shine more to MMA which incorporated the striking and other disciplines into it. So, having invested in Gi at the time, I only trained in it for about a year while focusing more on MMA and after 3-4 years training mainly No Gi for MMA I returned back to training in the Gi again. But having retired from active MMA competition in 2018, all I train in now is BJJ.

Majid: Who is your hero that has initially hooked you and kept you hooked to MMA and BJJ?

Shah: As far as hero’s go, I don’t really have one in MMA as each era has had its legends. For BJJ and MMA my earliest favourites were Rickson Gracie and BJ Penn. Both complimented their grappling skills beautifully in MMA

Majid: I loved Penn’s aura of invincibility in the early days. What made you stick to training at Crossface MMA?

Shah: I stayed training at Team Crossface under UFC vet. David Lee. He was still an active fighter at the time and formed his team at two locations in Harrow and Slough. Dave shared the same BJJ lineage as myself and was also a student of Erik Paulson of CSW so under two very established lineages in both BJJ and MMA I was proud to represent Team Crossface. David was also an Encyclopaedia of knowledge being both unorthodox and exciting as a fighter and I enjoyed his sessions very much when I first started and just stuck with it.

Majid: That is an incredible wealth of experience and knowledge you have had at your disposal. What encouraged you to compete?

Shah: I think it was a combination of a few things being always competitive as a child growing up the frustration at not being able to box as an amateur due to bad eyesight (corrected years later via laser surgery) and most importantly to put new found skills to a test which I had accumulated over a set amount of years before stepping into the cage.

Majid: Going in to your first MMA fight, were you more a grappler or striker?

Shah: More of a striker for definite. I learnt a great deal about myself in my first fight. As well as a long list of weaknesses which I didn’t think I had! 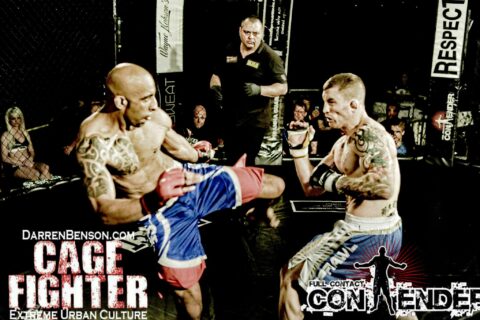 (Shah throwing a kick in an MMA bout)

Majid: What did you start competing in first MMA or submission grappling competitions?

Majid: What has been the biggest event you have fought on?

Majid: That sounds amazing. Were you star struck at the event?

Shah: No not really star struck but just appreciated at being on a magnitude of an event fighting in an arena with a packed house for the first time. It felt great being from a small town of Slough representing my community.

Majid: Who do you model your game on whether it is MMA or BJJ?

Shah: I’ve never thought of it like that to be honest! I think a fighters style is unique to him/herself. But if I could mould myself in the perfect fighter. I’d say it would be a hybrid of Khabib/Jon Jones / Damian Maia.

Majid: That is a very interesting answer. What encouraged you to start teaching?

Shah: Just the love of wanting to pass on skills to the next breed of martial artist which I feel also acts as a training session for me in terms of repetition both mentally and physically.

Majid: I see that you done some teaching in Pakistan. What is your link to Pakistan?

Shah: My original link was Bashir Ahmed who asked me to come to his gym to both train and teach a seminar back around 2009 I think it was. secondly it was having done a tour with the PBJJF having helped out in promoting the sport of BJJ by seminars and officiating at Pakistan Grappling Challenge 3. I did pop by in between these times whenever I visited at Synergy MMA in Lahore taking a session whenever I was in the country visiting too.

Majid: For the readers who don’t know, you are probably the most experienced Pakistani origin MMA fighter in the world. I believe you fought in Pakistan as well, when was that?

Shah: So, I’ve heard, but to me it’s just a temporary statistic if even verifiable. And doing a sport at a time when not many people were familiar with it. Yes I fought in Pakistan twice. Once in 2016 and once in 2017 I believe it was.

Majid: That is awesome. How did it feel fighting in Pakistan in comparison to fighting in the UK? 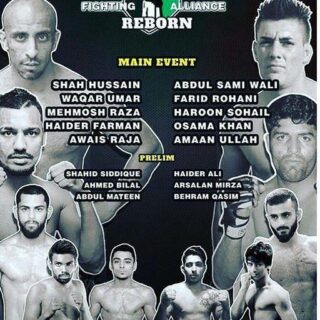 Shah: Fighting in Pakistan first time felt a little surreal. As in, a home crowd. With no corner (due to lack of budget from the promotion) I was a bit out of my comfort zone on this end. I also under-estimated the heat a little and maybe should have flown out earlier to get climatised to the environment. But in terms of production of the show in Pakistan, I was really impressed.  Fighting in the UK is a hometown affair really regardless of where I fight due to my strong contingent of support that would follow me. 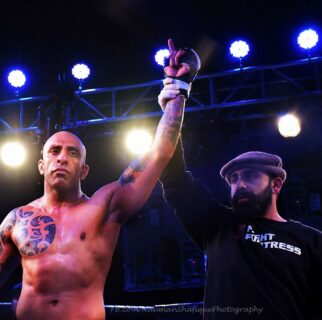 (Shah getting a win in an MMA bout in Pakistan)

Majid: I know that you are retired from MMA fighting but would you consider competing in sub only competitions in Pakistan if things lined up?

Shah: 100 percent I would. BJJ is now what I do and I’m just hungry to get as many comps / fights under my belt as possible. 2020 killed all hopes of goals for me and many others. Now it’s just making up lost time.

Majid: Just for the readers knowledge what rank and lineage are you in Brazilian Jiu Jitsu?

Shah: I am a Brown belt under Icon Jiu Jitsu team headed by Ze Marcello. 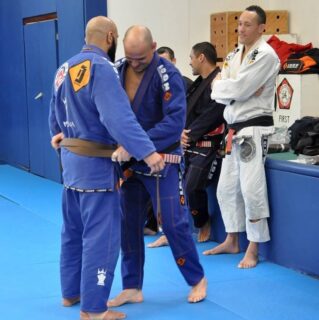 (Shah getting promoted to brown belt in BJJ)

Shah: I think the sport of BJJ in Pakistan is still a few light years away in terms of the growth compared to the UK. I think the talent in Pakistan is unreal having seen this first hand and I could easily see guys from Pakistan medal and hold their own in comps here in the UK. I just think the politics of the official federations coupled with a bit of a ‘my team is better than yours’ mentality is hampering the growth of the sport in Pakistan which I think is brought on by a lack of opportunities in BJJ comps in the country full stop. I follow the sport and developments on social media as and when but would rather see guys from the country on the podium more than online battles! 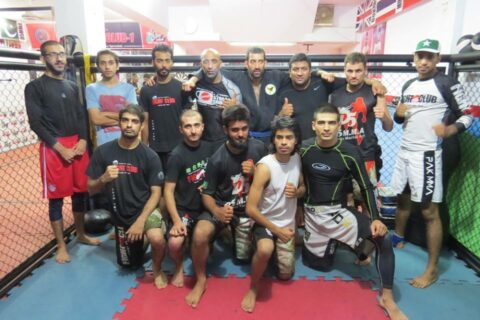 (Shah after a seminar at Master Chen’s Academy)

Majid: I totally agree with you. I just think there is a lot of politics and leg pulling still embedded there along with dishonesty as well which takes away from what people have achieved. What is your opinion on the current Flogger Series MMA and Submission Grappling events in Pakistan?

Shah: The Flogger Series guys see to have been the most consistent in holding events from what I’ve seen. its not about having the bright lights and best production for an event but consistency, and these guys seem to be ticking all the right boxes as far as promoting grass roots MMA is concerned. A continuous platform for MMA fighters in Pakistan to showcase their skills on and gain experience.

In terms of Submission Grappling events. Apart from the PGC events that took place in Pakistan, I’ve only really seen in-house club based small comps and nothing on the magnitude of a national level competition such as PGC. It would be nice to see regular PGC level standard events where all clubs / BJJ practitioners from across Pakistan and beyond can come to on a level playing field to compete on. 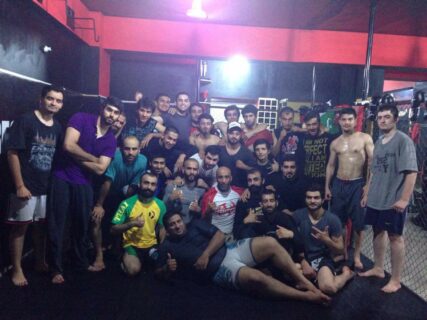 (Shah at a seminar at Team Fight Fortress in Islamabad)

Majid: I totally agree consistency is the key. What are your short term and long term goals in the coming future?

Shah: Short term to get fit again, long term to hit the comp circuit including doing some IBJJF comps. And then once things go back to some sort of normality to look to compete at some of the bigger IBJJF comps abroad like Europeans, Worlds and ADCC. I’m in Masters 3 category now so it’s now or never!

Majid: Wow those goals sound very inspiring. Do you have any parting messages for the readers, eg aspiring martial artists?

Shah: Yes, leave your ego’s off the mats, don’t rant and rave about yourself because no one really cares, There is always guys out there much much better then you. Stay humble, train hard and let your achievements do the talking and the most important thing is to never stop trying and always aim high.

Majid: Shah that is awesome advice. It was a pleasure speaking to you. I want to thank you on behalf of myself and my colleagues on the UK BJJ Show for taking time out and participating in this interview. I wish you the best of luck in your future endeavours.

Shah: Thanks for the time Maj, it’s always great talking to you.