BRAVE CF champion Eldar Eldarov welcomed by Dagestan Minister of Sports: ‘You are the pride of our republic’

Eldar Eldarov made history two weeks ago when he became the first Super Lightweight world champion to defend his belt at BRAVE CF 46, which took place in his home country of Russia. Last Friday, his achievement was recognized by Magomed Magomedov, Dagestan’s sports minister, who welcomed Eldarov in his office to congratulate him on representing Dagestan on an international stage. 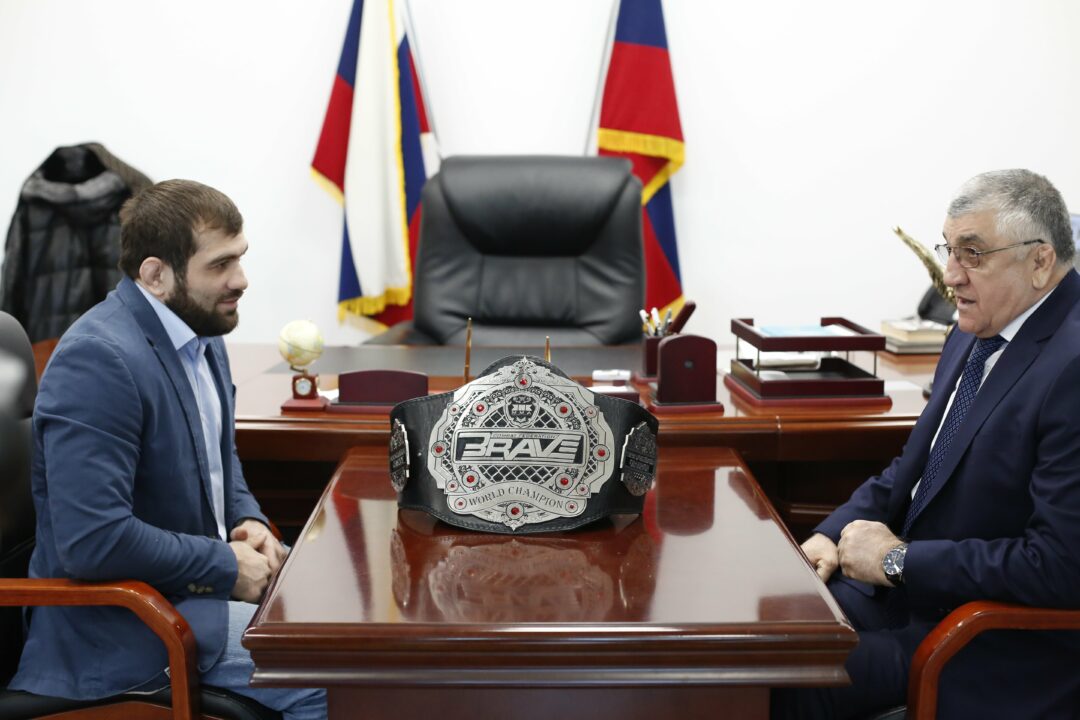 During the meeting with Eldarov, Mr Magomedov expressed his gratitude for the values that the champion represents and said Eldar was ‘’the pride of Dagestan’’ alongside other notable figures from the mixed martial arts world, such as Khabib Nurmagomedov and late coach Abdulmanap Nurmagomedov.

‘’The image of the Republic of Dagestan depends on the behaviour of its people. Wherever we are, if we behave bravely, honestly, with dignity, openly, then people will have such an opinion about the republic itself.  I am very pleased to congratulate you on your victory today. We consider you the pride of our republic. The same pride as Khabib Nurmagomedov, your coach Abdulmanap Nurmagomedov’’, said Magomedov, who also made it a point to note Eldarov’s impact as a role model.

‘’And what pleases me most of all it’s not your sporting achievements, but your upbringing, your patriotism, spiritual and moral qualities, the example that you set for young people. Becoming an Olympic champion or world champion is not the most important thing. The most important thing is to become a good person. I have heard many positive reviews about you as a person. Therefore, we are very pleased to set you as an example for the youth of Dagestan and Russia. Thank you very much that you are with us’’.

Eldar Eldarov continued his winning streak in the main event of BRAVE CF 46, by beating Brazil’s Leonardo Mafra via TKO due to a cut. It was Eldar’s second TKO under the BRAVE CF banner after he knocked out Mafra’s countryman Henrique Rasputin back at BRAVE CF 6. He has three more BRAVE CF victories, against Kevin Koldobsky, Brian Hooi, and Mounir Lazzez.