‘The Outlaw,’ Dan Hardy had been going back and forth on social media in pursuit of securing a fight against ‘The Immortal’ Matt Brown. On Monday, MMA Fighting reported Matt Brown vs Dhiego Lima is set to be announced on UFC’s Fight Night event on June 19th.

With ‘The Immortal’ one out of a potential match-up with Dan Hardy, ‘The Outlaw’ moves onto the next person on his list, Nick Diaz. 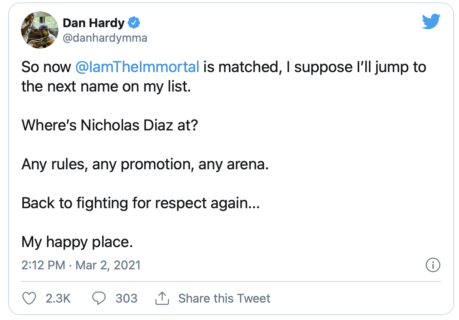 ‘So now @IamTheImmortal is matched, I suppose I’ll jump to the next name on my list.

Any rules, any promotion, any arena.

Back to fighting for respect again…

Hardy is looking to make his return after going 2-0 in 2012. A first-round TKO win over Duane Ludwig at UFC 146 and a unanimous decision win in his final fight over Amir Sadollah in September 2012.

Stockton Nick Diaz last fought in the main event of UFC 183 in January 2015. Which saw him fall to a unanimous decision loss to Anderson ‘The Spider’ Silva. It was later overturned as a no-contest after both fighters failed drug tests.

Nate Diaz’s manager revealed a strict 14-week diet and training regiment would see Stockon’s bad boy return in 2021. Mubenga stated he is, “99.99999” percent certain Diaz would make his return to the Octagon by the end of the year.

Hardy vs Diaz, loads of violence and smack talk, I’m all for it!