Interview with Ben Hills, BJJ brown belt and coach at Next Generation Liverpool

by Kieran Devine
in BJJ, Interviews
0

I had the pleasure of chatting with Ben Hills. He is a BJJ brown belt under Paul Rimmer and is a fierce competitor, competing in many different competitions. He is also a coach at Next Generation Liverpool training alongside many pro and amateur fighters, and many BJJ practitioners. Ben is a great guy and it was great to chat with him. Enjoy!

Kieran – As always, where did your BJJ journey begin?

Ben – My family has always been hugely sporty. I have always been involved in sports even from a young age, from childhood judo and football to competing nationally with Rugby and swimming throughout my teenage years. When I was 13 years old I began looking for a new challenge, which is when I managed to convince my dad to take me to Next Generation. I initially turned up to Next Generation Wirral looking to take part in a striking class. When I got there I had actually got the wrong day which meant I had missed the striking but was in time for the start of BJJ. Paul convinced me to get stuck into the class and that was it, I was hooked. In that class, Paul taught straight foot-locks, after which I couldn’t walk for about a week. After that class, my dad very kindly signed me up for my first month of training, I swam in the morning, played rugby after school, then headed straight to jiu-jitsu for the evening… every day. After a short while, jiu-jitsu had captured my full attention and I began training every hour I could. I then progressed my training to Next Generation’s main gym over in Liverpool. I focused on competing wherever I could travelling the length and breadth of the country. I got my blue belt after around 6 months and things progressed from there.

Kieran – So you fancied a new challenge at 13, had you seen any form of Mixed Martial Arts at that point to be interested in NextGen?

Ben – I had seen a few bits from the UFC at the time. The Forrest Griffin v Anderson Silva and Gonzaga v Cro Cop fights were always the ones that stuck in my mind! When I started it was a relatively unknown sport. It was just really getting big in the UK so it was incredible to see how it took off. 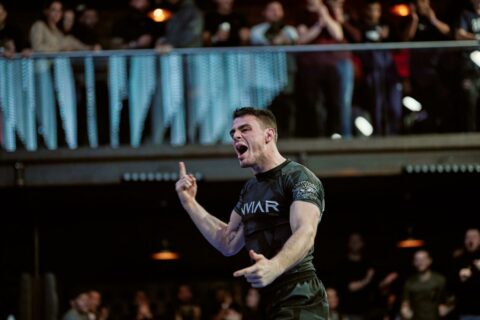 Kieran – Both very memorable fights. Can you tell me what that first session was like for you, rolling with adults at age 13? What was the main thing that got you hooked?

Ben – I think it was the technical nature of it. I was always athletic and always enjoyed pushing myself but this was something else. When you first start you almost feel helpless, it was then I really wanted to learn. It was scary walking onto the mats for the first time! Not knowing what to expect, but I think it was Paul’s teaching style that I really connected with.

Kieran – I can understand the feeling helpless part, you look around at all these different coloured belts and think ‘they are going to kill me’ but they are very friendly and helpful and make sure you understand everything. After that first session, how much time did you put into studying the craft, in terms of online videos and guides?

Ben – Exactly that! After that first session as I said I was completely hooked! My first video exposure to jiu-jitsu was watching Marcelo’s incredible 2003 ADCC performance! Super inspiring to see! In terms of instructional content, I spent a lot of time watching Ryan Hall, Chris Brennan and simply being guided and shaped by Paul on the mats. I’m the kind of guy that is either all in 100% or not at all and I was consumed with BJJ and every aspect of it. All the way up until I went to uni. I went to uni and pretty much trained full time for my first year, and my grades suffered because of it. This eventually led to me taking the next few years away from jiu-jitsu. I then came back to the sport in early 2018.

Kieran – Did your grades become better with that hiatus from jiu-jitsu? You are a fierce competitor and have competed across many types of competition, do you recall your first time in a competition and what that was like?

Ben – They did indeed. My first-year grades suffered but I ended up coming out with a 2:1. I do and actually have a video of the first time I stepped on the mat. It was at a Ground Control tournament in Manchester which I don’t believe exists anymore. I ended up taking him down with a terrible single-leg, passed through side control to mount and mounted triangled him for the finish. I was super nervous walking onto the mats but as soon as the fight started I felt right at home. I took gold that day finishing all fights with triangles. 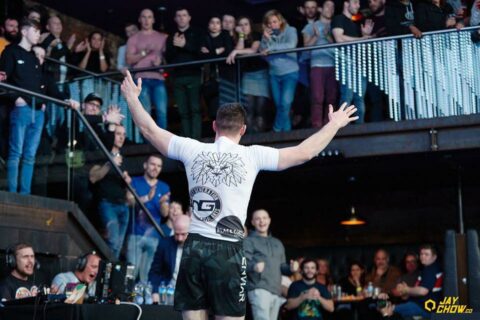 Kieran – So with all those triangles is it fair to say that it’s your preferred submission?

Ben – It certainly was at the beginning. Paul suggested it was a good thing to focus on based on my body type and he wasn’t wrong. I won the vast majority of my tournaments at that time by triangle or guillotine. These days Id like to think I’m more well rounded, I’ve worked hard to develop all aspects of my game but I can’t deny that I love neckties and everything that comes with them.

Kieran – What is the best necktie you have pulled off and in conjunction with that question, what is the biggest moment in your BJJ journey?

Ben – I was pretty pleased with two in my career so far. One was my first time on Grapplefest where I hit a variation of a Peruvian necktie on Kev Owen, the second was a modified guillotine I hit against talented Australian James Walters. Asking about the biggest moment is a great question and it’s tough to pick just one. I think anytime you win a big match that feeling is incredible and Grapplefest has given me a platform to show my skills to the world. I’ve always loved travelling to other gyms and I spent some of my Grapplefest camps back in November 2019 over in NYC at Renzo’s and Marcellos which was an incredible experience that I’ll never forget. 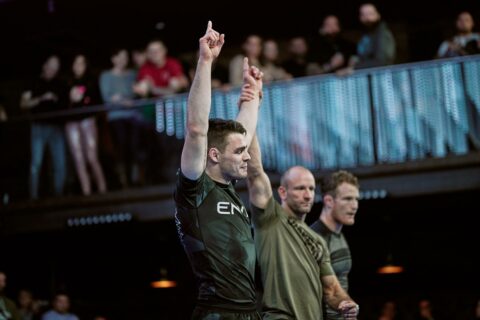 Kieran – Some great moments in there and I’m sure you will make many more. BJJ is great for keeping you in shape physically, but has BJJ had an impact on you mentally?

Ben – Absolutely! Of course! In many different ways. When you step on the mats it’s 100% focus, nothing outside matters except what you’re doing in that exact moment. I look at it as a huge problem-solving exercise and that helps me focus my mind on the task at hand. On top of that, there’s no better feeling than when you’ve spent years working on your skills – not just the 1000s of hours you’ll spend on the mats drilling and rolling, all the hours spent lifting weights, running hills, dieting and studying. Then stepping out on stage and showing what you can do.

Kieran – I can see why it hooked you for its technicality especially with viewing it as a problem-solving exercise. I asked Nathan and Matt this when they were on mine and my mate’s podcast, what is it like to roll with Paul Rimmer especially with him being one of the most established black belts in the UK?

Ben – It’s really quite interesting. He’s a super technical guy with an incredible wealth of knowledge. His knowledge of jiu-jitsu and martial arts, in general, is staggering. Rolling with him is always a challenge, he’s got a wicked half guard and deep half guard game topped with an unshakable passing system. His ability to break down situations and reverse engineer problem points is world-class and that’s why I fully believe he’s one of the best in the world in both MMA and BJJ. His ability to adapt styles to the person is unique too. It’s not just Paul’s game that everybody plays like in a number of other gyms most students are carbon copies of the coach. In NextGen, we’re all unique, and that’s down to Paul. 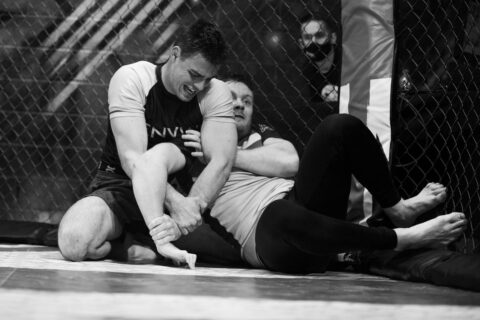 Kieran – That is one of the things the lads highlighted about him is his ability to cater to every individual and what works best for them. Could you highlight some fighters from both MMA and jiu-jitsu that we should keep an eye out for?

Ben – Absolutely, there’s too many to name in both disciplines but just some to highlight off the top of my head, some are already established but have so much more to show. In MMA- Nathan Fletcher, Matt Bonner, Liam Gittins, Paddy, Adam Cullen plus many many more. In BJJ, again so many to name, but- Matty Holmes is always one to watch, my main training partner, a super exciting and dangerous grappler. Arran Jordan another one of my absolute best training partners, super dangerous and got so much talent. Konrad Chrusciel the polish powerhouse, extremely dangerous grappler and you will see what he’s capable of at ADCC trials. Plus loads more. Including a huge wealth of incredible talent coming through our kids’ program at the gym. Many of our kids are already multiple-time champions in their own right.

Kieran – Finally mate, with things looking up and changing what can we expect from yourself and NextGen Liverpool this year?

Ben – Ah that’s a great question. I think we’ve got an incredible stable of fighters, both in the MMA world and jiu-jitsu. I think for MMA the talent we have coming through will blow people away, that on top of the current talent stacked in our pro team is something to watch closely. In terms of jiu-jitsu, we have such a wealth of talent at all levels and I’m sure you will see that as competitions open back up! At the top level, we’ve been working hard to get the team prepared for this year which I’m sure you will see it very soon. Gutted we couldn’t take a team to worlds, euros and pans this last couple of years so excited to get stuck in there. And of course, looking forward to taking our team over to ADCC trials in September.

Kieran – I will definitely be keeping my eyes peeled. Ben, I appreciate you taking the time to chat with me and giving us some insight into your journey… So far. Can’t wait to see what else you accomplish mate.

Ben – Thank you for the opportunity mate and look forward to catching up again soon.

ONE: FISTS OF FURY III FINAL WEIGHT AND HYDRATION RESULTS