'Ruthless' Robbie Lawler is set to rematch Nick Diaz on UFC 266 in September.

by Matt Farrington
in UFC
0

Lawler swings for Nick Diaz in their first bout in 2004.

In 2004, the two cult heroes had a classic tear up on UFC 47 which resulted in Nick Diaz knocking out ‘Ruthless’ Robbie Lawler, 17 years later they are set to meet again on UFC 266.

This will be Diaz’s first fight in 6 years, and although some speculated that he would return to fight against the ‘BMF’Jorge Masvidal, the news that he will fight Robbie Lawler was broken by ESPN, who heard from his attorney Ross Goodman that Nick will be back in the octagon for a second fight with fan favourite Lawler.

It’s fair to say both of these legends are now past their physical prime but, based on the brutality of their first meeting in 2004, this fight has already amassed a roar of excitement from fans across the globe. Furthermore, there is no denying that both Lawler and Diaz are both still in good condition as both men stay ready in the gym all year round, Diaz infamously competing in triathlons. This fight will be a 5-round co main which will push both men  to their limits.

Nick Diaz’s return will be the most anticipated coming out of retirement possibly ever but to rain on his parade, Lawler is currently the betting favourite on sportsbetting.ag at -135 and Nick at +115.

While Diaz has been retired, Lawler has been fighting consistently. Recently though he has been on a 4-fight losing streak, albeit it top level fighters like RDA, Neil Magny, Colby Covington, and a very controversial loss to Ben Askren. Regardless of his form though, his loyal fan base always tune in to watch him. 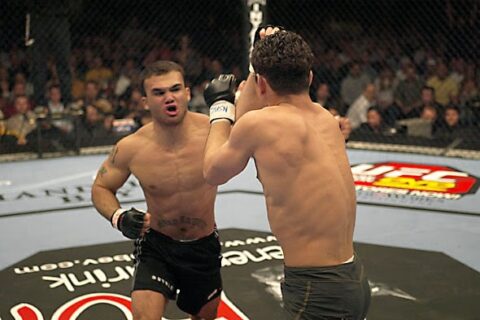 Nick and Robbie, two icons of the game.

Lawler’s career has been full of ups and downs, but as his career progressed and he improved he became the  “Ruthless” Robbie Lawler we know today. Over years of trials and tribulations he managed to capture masses of fans and a UFC Welterweight title too. His most notable wins against Rory Macdonald and Carlos Condit all came after years of losing to the likes of Diaz, Hendricks and Lorenz Larkin; but it was this struggle that made his career one of the best inspirational comeback stories in modern MMA.

Now, after losing 4 on the go he is looking ready to retire, but not quietly, not without one more roll of the dice. His explosive power and forever intense presence demand respect from Diaz in his comeback fight.

Similarly, Diaz is a man who captured the fans despite never having being the absolute best in his division. Having lost to all time top 5 greats like GSP and Anderson SIlva, as well great fighters such as Carlos Condit and Diego Sanchez; Diaz earned a reputation as a rebel who would fight anybody anywhere without a worry or care in his mind. For those who don’t already know about Nick, like his brother he embodies the “Westside Gangster”, but he is also a true mix martial artist with lethal BJJ and striking abilities. Him and his brother Nate’s popularity with fans is undeniable and it is clearly shown by the fact that this fight is scheduled for 5 rounds when it is not the main event, and it’s a non-title fight- this has only ever happened once before in UFC history. The only other fight to be scheduled for 5 rounds without a title or main event slot is Nick’s brother Nates’ fight against Leon Edwards.

Nick beat Lawler in his 3rd MMA bout and he is the only person ever to have stopped Robbie with punches, so it feels like there is unfinished business there for Lawler, who improved massively over the years but never had a rematch with Nick.

The fight is likely to take place on the undercard of the season 29 TUF Coach showdown between Alexander Volkanovski and Brian Ortega for the Featherweight world title. This card, UFC 266, has plenty of cracking fights already such as the clash between heavyweight contenders Curtis Blaydes and Jairzinho Rozenstruick, and bantamweight clash between Marlon Moraes against Merab Dvashelli.

Regardless of the fights on the card it goes without saying that ‘Ruthless’ Robbie Lawler V Nick Diaz 2 will dominate headlines in the buildup to UFC 266 and despite the years this rematch is overdue by, we cannot wait. Hopefully the fight will satisfy the fans, however hard that may be due to the immense hype we anticipate around it. Will it be a ‘Ruthless’ redemption or a Ruthless repeat?

Cameron 'Camchida' Else returns to the Octagon!