A mixed martial arts film starring UFC Flyweight Champion Valentina Shevchenko and the Academy Award winning Halle Berry is due to be released next week. It will be Shevchenko’s first acting role.

‘Bruised’ tells the story of Jackie Justice (played by Halle Berry), an aging former UFC fighter who walked away from a promising career after a disastrous fight. Years later, living through tough times and not satisfied with her current life, Justice accepts an offer to return to the octagon and fight the reigning champion, known as ‘Lady Killer’ (played by Shevchenko), whilst also dealing with the unexpected return of her 6-year-old son, whom Justice gave up for adoption when he was an infant.

Committed to her craft and determined to give the best performance possible, the Academy Award winning Halle Berry went through real life mixed marital arts training to convince the audience that she really was an MMA fighter.

“It is hands down the hardest thing I’ve ever done in my professional career,” Berry told MMA Fighting. “I think it’s second only to child birth. I had to push myself further than I’d ever been pushed myself. All those disciplines are at play so I had to learn bits of all of it.

“You can’t just all of a sudden look like you’re a real fighter. You really have to take the time and just put in the work and let your body sort of transform to look that way. I had to get some of these techniques in my body so that when shoot day came, I wasn’t still struggling with it. I had these things solidly in my body”.

Berry has also been a hardcore fight fan her whole life and has been spotted at many UFC events over the years. 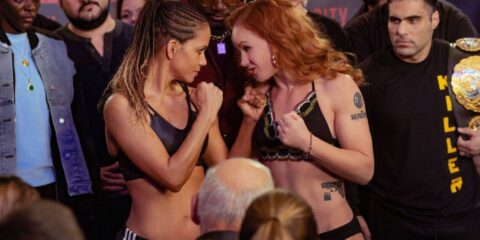 Undisputed flyweight queen Valentina Shevchenko didn’t hesitate to accept the role when offered it. “Who would say no if Halle Berry is calling you? It is not a question?” Shevchenko also told MMA Fighting.

Shevchenko was full of praise for Berry’s dedication to training and her desire for the fighting in the film to be as authentic as possible.

“Her main idea for the fight scenes, it has to be real,” Shevchenko said. “It has to be a real fight. As real as possible. Sometimes she was in the training, she was like ‘Valentina, you have to hit me harder’ and I’m like ‘Halle, I’m not sure’ and she said ‘you have to hit me, I have to feel that.’ I was like OK, I’ll do my best”.

‘Bruised’ is set to be released on Wednesday November 24 on Netflix.