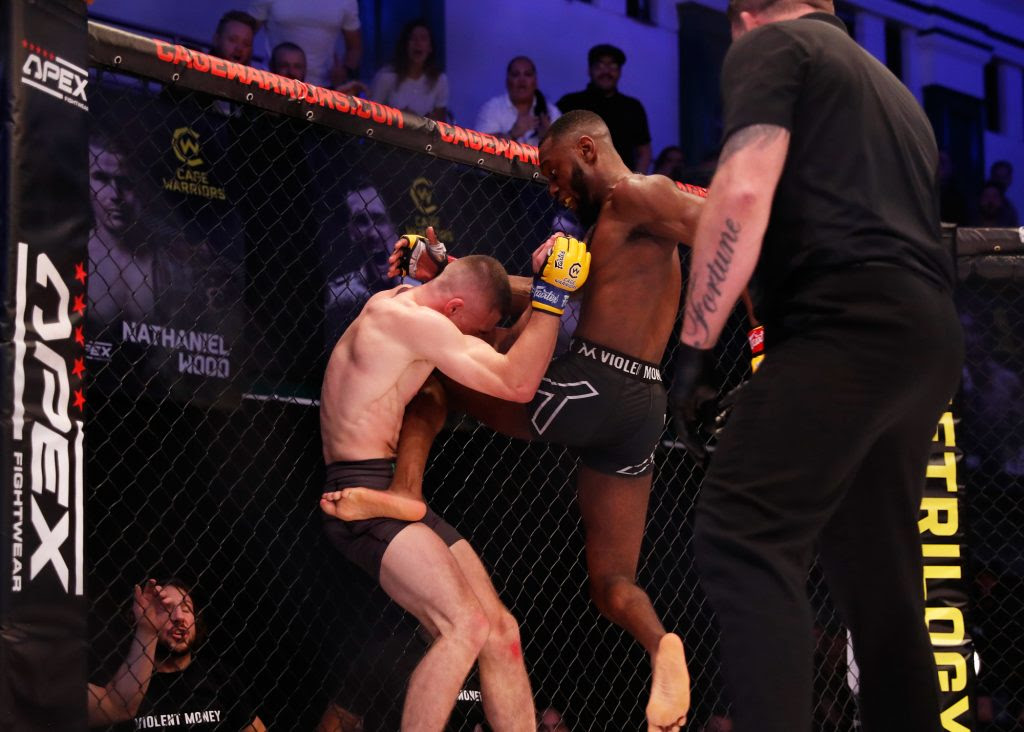 Dominique Wooding will make his maiden title defence of the Cage Warriors title, as he takes on the 9-3 Carlos Abreu on the second night of Cage Warriors’ upcoming Double Trouble event on Saturday 11th December.

Several other fights have also been added across both nights of the doubleheader.

Talking on his first title defence, Wooding, who has won both of his fights in Cage Warriors by knockout, said: “This fight is only going one way and that’s me going three out of three on kills to finish off the year in devastating fashion.

“There’s a great performance incoming from me and this is the fight that gets me signed to the UFC.

“Training camp for me and my teammates that are on the Double Trouble cards at GBTT is going really well with solid work being put in day in day out so the team will be riding out in full effect!”

Carlos Abreu enters Cage Warriors with a 9-3 record consisting of one TKO win and four submission wins and will be in the position of challenging for the title in his first-ever fight for the promotion.

Ahead of his title shot, Abreu, who has a win over Cage Warriors veteran Chris Miah, spoke about how big his upcoming debut is: “This is the chance of my life!

“The cage is my home and I am afraid of no man!”

CW 132 will also see the Cage Warriors debut of Wooding’s teammate, Lone’er Kavanagh as he takes on Maximilien Vallot.

Speaking on the additions to both nights, Cage Warriors president, Graham Boylan, said: “Every time I look at these Double Trouble cards I get more excited.

“We’ve now got four world title fights with the addition of Wooding, and I’m sure people are interested in seeing how well he will perform in his first fight as champion.

‘Then you look further down the cards and we have some incredibly talented fighters ready to show the world what they can do.

“These two events are going to be crazy and I can’t wait to end the year with a bang with our fans at York Hall!”

At CW 131, Michael Tchamou will make his Cage Warriors debut in a middleweight contest against Samir Kadi, Luke Riley makes his second Cage Warriors appearance as he takes on GB Top Team’s Yuki Angdembe at bantamweight, while Yassine Belhadj will go toe-to-toe with Danilo Belluardo in the lightweight division.

Tickets for both nights of Double Trouble are on sale here.