These two first fought at UFC Fight Night 86: Rothwell vs Dos Santos in April 2016 when French-Cameroonian Ngannou got the victory due to doctor’s stoppage after the second round. The Predator’s sharp punches kept landing squarely on the right eye of Blaydes until it had completely swollen and he could no longer see out of it – it was his UFC debut and his only loss as a professional to date.

Ngannou went on a tear after this, winning his next four fights including his famous first-round uppercut knockout of heavyweight veteran Alistair Overeem (43-17-0, 1NC) quickly making a name for himself as the scariest prospect in the division with his devastating power. A punching machine test at the UFC Performance Institute proved Ngannou to literally be one of the hardest hitters in the world and some were claiming him to be the ‘Mike Tyson of MMA’. 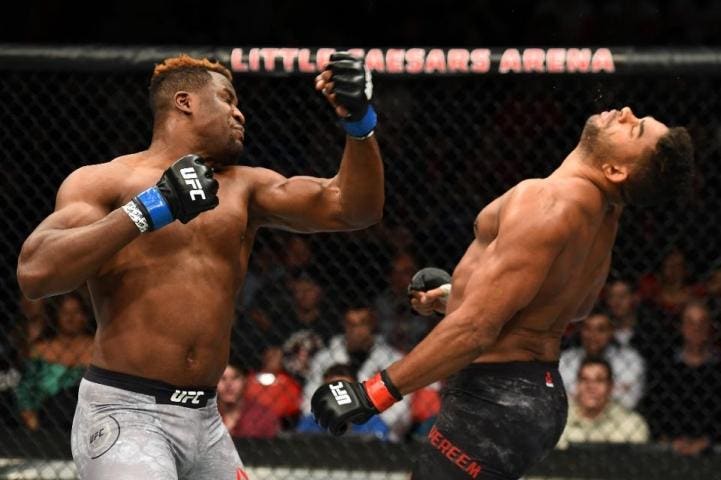 We could tell that Ngannou was starting to believe in his own hype – he starting wearing flashy suits to public appearances and his long black cornrows were traded for a spiky haircut with blonde lightning bolts shaved into the side of his head. He challenged then-champ Stipe Miocic (18-3-0) where, despite telling him he would “go to sleep” at the staredown, he was dominated for five rounds. His power wasn’t hurting Miocic and his lack of a ground game was brutally exposed.

His next fight with current #2 Derrick ‘The Black Beast’ Lewis (21-6-0, 1NC) at UFC 226 in July featured possibly the least number of punches ever thrown in a heavyweight fight. Both fighters were scared to engage and Lewis blamed this on his notorious back issues, winning by decision. We can only assume that Ngannou, no longer feeling invincible, had let the fear get to him.

Curtis Blaydes trains with Elevation Fight Team in Denver, Colorado and has been earning a reputation as the young wolf in the division. Apart from a no-contest against Adam Milstead, he has won five fights since his bout against The Predator and lost none, including wins over Alistair Overeem and Mark Hunt. Known for his humility, he will be entering this fight confident in himself and eager to make a career-defining statement. The opposite of Ngannou, who will be entering this fight under heavy scrutiny and desperate to reestablish himself as a heavyweight threat.

Will Curtis flip the tables this time around? Or will Ngannou regain his composure? Have your say in the comments below.