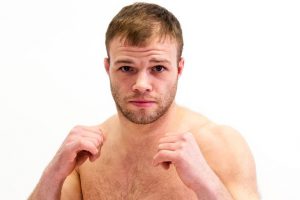 Going to the ground is like a chess match, one wrong move can mean the difference between you or your opponent tapping out. In today’s episode of Across The Pond, we will meet a fighter who is not to be messed with on the ground.

Fighting out of Team Kaobon and a training partner of UFC veterans Terry Etim, Paul Sass, and Andy Ogle, 28-year-old Mike Grundy holds four Submission wins, all of which have come inside the first round. In his Professional debut at BAMMA 16, Grundy faced fellow ground artist Ant Philips and defeated him via Darce Choke early in round one. He met Mike Cutting at BAMMA 17 and again won via Darce Choke in less than two minutes. Grundy would go on to defeat Mamadou Geye at BAMMA 18 before suffering his first Professional loss to now UFC fighter Damian Stasiak  via second round Triangle Choke at BAMMA 19. Grundy returned to his winning ways In February of this year with a first round Arm Triangle Choke over Damien Frankenwitz at BAMMA 21..

The Good, The Bad & the Ugly: UFC Fight Kit