to make it in Mixed Martial Arts, a fighter must have an exciting fighting style and per 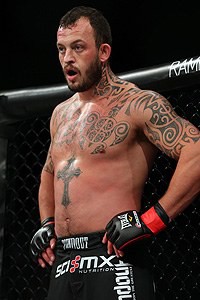 sonality. In today’s episode of Across The Pond, you will meet a fighter who looks to give the fans what they want each and every time he fights. Fighting out of All Or Nothing 31 year old Mark Godbeer owns a 10-2 record in 12 career fights consisting of eight Knockouts and two Submissions. Godbeer is a power puncher who never allows his fights to go to the scorecards. A Professional since April 2009, Godbeer defeated his first three opponents via Knockout . Marc is best known for his run in BAMMA and is currently their Heavyweight champion. He made his debut for BAMMA in March 2012 at BAMMA 9 and defeated his opponent via Knockout after his opponent’s corner stopped the fight at the end of the first round. Following a one fight stint with Bellator , Godbeer returned to BAMMA to face Thomas Denham at BAMMA 19 and defeated him early in the first round. In his next fight for the promotion, Godbeer faced fellow Knockout artist Paul Taylor for the right to be called BAMMA’S first Heavyweight champion at BAMMA 21. He defeated Taylor via Knockout late in the second round to capture the belt. Godbeer will now face Germany’s Ruben Wolf in his first title defense at BAMMA 23 on November 14th, 2015.