Throughout a fighter’s career, they will experience peaks and valleys that makes them 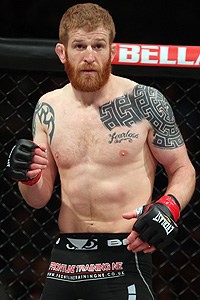 go back to the drawing board and completely change their fighting style. In today’s episode of Across The Pond, you will meet a fighter looking to get his career back on track after a three fight skid. A professional since April 2007 fighting out of Team Fish Tank, Andrew Fisher owns a 14-7 record in 21 career fights consisting of eight submissions, five knockouts, and one decision. Fisher is very crafty on the ground with unique submissions such as North South Chokes and Keylocks. Fisher won his debut via Unanimous Decision. He lost his next fight via knockout but then rebounded by winning his next four fights via submission. Fisher has fought for various promotions in Europe including BAMMA and Cage Warriors. He made his BAMMA debut in 2012 with a first round knockout of Andy Green at BAMMA 11. Following a two fight stint with Bellator, Fisher signed with Cage Warriors to take on Artem Lobov at Cage Warriors 70 in Dublin and lost via knockout late in the third round in a highly entertaining scrap. Since his three fight skid, Fisher has won two straight fights, a second round submission over Wesley Murch and a second round knockout of James Saville.