Man On A Mission

When a fighter decides to turn pro, their goal is to make it to the UFC. In today’s 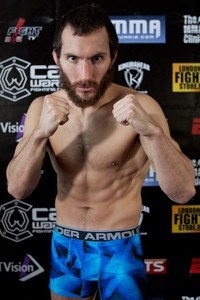 episode of Across The Pond, you will meet one of the top ranked fighters in the UK who very well could be on UFC London next year. A professional since June 2009 and fighting out of GYM01, 28 year old James Brum owns a 17-3 record in 20 career fights consisting of five knockouts, four submissions and eight decisions. Brum is a popular English fighter who is best known for having fought for Cage Warriors from 2012-2014. . In his MMA debut, James defeated Paul Colyer via knockout in the second round. Brum defeated his next four opponents before picking up a decision win over ”MR. Pink” in October 2011. At Cage Warriors 46 in Ukraine, James defeated Leandro Gontijo via unanimous decision. Brum went on a seven fight win streak that included wins over James Saville at Cage Warriors Fight Night 7 and Oliver Pastor at Cage Warriors Fight Night 8 respectively. James is 3-0 so far in 2015 with wins over Niko Gjoka, Jay Thomas and Hayden Sheriff.  I think James would make an excellent addition to the UFC’S return to London in February.
Brum at Cage Warriors 46-

UFC on Fox 17 Official Weigh-in Results: Yes there were lightsabers!!