When a fighter steps into the cage, they are able to zero in on the opponent and blo 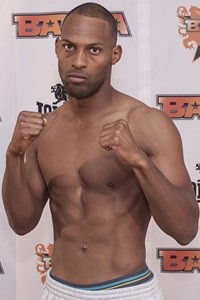 ck out the noise. However it becomes even more difficult  when you fight in your opponent’s home country.  In today’s episode of Across The Pond, you will meet a fighter who is looking to spoil an Irish fighter’s homecoming. A professional since December 2012 and fighting out of Combat Company, Nathan Jones owns a 9-4 record in 13 career fights consisting of eight submissions and one knockout. Jones is a three time BAMMA veteran and is currently on a five fight win streak. In 2013  he won all four of his  fights via submission in the first round.  He signed with BAMMA in 2014 to take on Alex Montagani at BAMMA 15. To close out that year, Jones submitted Jamie Richardson and Aron Brett. In 2015, Jones was 3-0 that included a successful BAMMA return with a first round submission win at BAMMA 19 over Oskar Somerfeld. Jones will look to push his win streak to six when he locks horns with Peter Queally at BAMMA 24 on February 27, 2016. Good luck Nathan!

Q and A with Nathan-

How did you get your nickname?

My fight name is Mr Bag & Tag (as in body bag). It started as a bit of a gimmick – I really wanted a fight name and could not wait to be given one, so I brainstormed… I was inspired by great fight finishes – go with the flow and get the job done – convincingly! BAG and TAG. I did not take the name seriously… until my crowd started shouting it at one of my fights. I was flagging – and it really inspired me because I knew they were calling me! The chants gave me the strength to not only finish the fight, but take control and WIN. It is rather catchy and quirky, so now I have run with it. You can follow me on social media at @mrbagandtag

What are your thoughts on your opponent(Peter Queally)?

Peter Queally is a good fighter. I have seen a few of his fights now. He has my respect and I am ready to take mine. He comes to fight – I would not have it any other way. With this kind of fight, the fans win every time. The threats that Peter poses, I have faced in other opponents. My hell on earth sparring partners, have been teaching me to dance with the devil. I am prepared and I am expecting a good fight. We will see who wants it more.

What is your favorite fight of all time?

There have been so many wars over the years. I love watching Robbie Lawler fight, plus at the moment, he is the man to beat in the welterweight division.

Tell us an interesting fact about yourself

I have two Master degrees – in Sociology and more recently in Youth Work and Community Learning and Development.

Favorite activity to do when not training?

I love teaching, I run a company called ‘In the Bag Performance Training and Coaching’ and I run a youth group twice a week. These guys are the highlight of my week. You can check it out on http://www.inthebagptc.com/