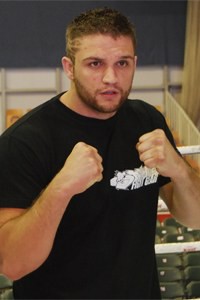 Mixed Martial Arts is a sport that requires years of dedication to master.  In today’s episode of Across The Pond, you will meet a well traveled fighter with explosive one punch knockout power. A professional since July 2005 and representing SBG Ireland, John Philips owns a 19-6-1 record in 25 career bouts consisting of sixteen knockouts and three submissions. Philips is currently the BAMMA Middleweight champion.

In his MMA debut, John knocked out Nigel Whitear in the first round. Then,he knocked out his next five opponents. He defeated both Jake Bostwick and Bouhmil Lungrik before going on a five fight win streak that included wins over Matt Thorpe and James Zikic at BAMMA 4 respectively. In 2012, Philips signed with Cage Warriors. At Cage Warriors Fight Night 6, Philips submitted Tomas Penz via triangle choke in the second round. He also submitted Chris Fields in round two at Cage Warriors 48. Philips returned to his knockout ways in 2015 with wins over Charlie Ward and Markus Di Gallo respectively. In 2016, Philips returned to BAMMA to take on Cheick Kone in the main event of BAMMA 24 for Kone’s Middleweight title. Philips took home the title when he knocked out Kone in round one. One thing is for sure, I see Philips holding on to the title for a while!