With family by your side, you can achieve anything that you set your mind to. In today’s episode of Across The Pond, you will meet a fighter who is hoping to follow in his brother’s foots 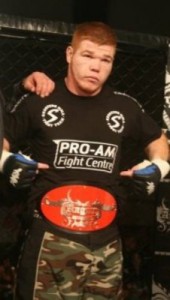 teps and make it to the UFC one day. A professional since November 2006 and representing Tsunami Gym, Tommy Maguire owns a 16-6 record in 22 career bouts consisting of six submissions, six knockouts and four decisions.

In his MMA debut, Tommy submitted Tristan James via armbar in the first round. Then, he scored back to back knockouts over Karl Garratt and Chris Richardson respectively. Maguire won his next six fights which included wins over Mark Harrison and Jordan James respectively. Maguire won his next two bouts via submission, defeating Joe Holder and Danny Fletcher. At BAMMA 10, he defeated Antanas Jazbutis via unanimous decision. Maguire picked up two more decision wins before signing with Cage Warriors. At Cage Warriors 59 in Wales, Tommy faced Lewis Long and submitted him in the third round. In 2015, he submitted Spanish fighter Oriol Gaset in the first round. One thing is for sure, the Maguire brothers are a force to be reckoned with in European MMA. Good luck in the future Tommy!