Fighters love to entertain the crowd by showcasing their techniques with style and finesse. I 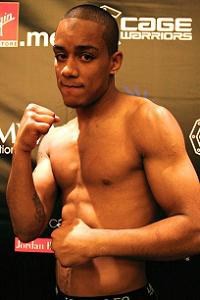 n today’s episode of Across The Pond, you will meet a fighter whose masterful use of submissions forces bring opponents to  their knees and  the fans to their feet. A professional since November 2008 and representing MMA Factory France, 28 year old Jean N’ Doye owns a 8-1 record in nine career bouts consisting of four submissions, three knockouts and one decision. Jean is best known for his time in Cage Warriors.

In his MMA debut, Jean defeated Dimitri Stepanow via unanimous decision. He won his next three fights which included wins over Alexander Gerber and Daniel Thomas respectively. At Cage Warriors Fight Night 1 in Jordan, Jean knocked out Dan Hope in the third round. Then he submitted Rich Edgeworth in the second round via rear naked choke at Cage Warriors 53 in Glasgow. He also tapped out Steve McCombe in round two via arm triangle choke at Cage Warriors 55 in Dublin. Jean faced Sergey Grechka at Cage Warriors Fight Night 9 in Jordan and submitted him via rear naked choke in round three. If this masterful submission artist goes to the ground, its checkmate for you!