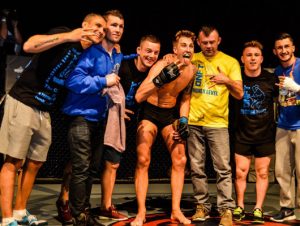 On September 30 at On Top Toe 2 Toe, Scotland’s Stevie Mcintosh will take on Poland’s Daniel Rutkowski for the On Top Lightweight title. A professional since May 2016 and representing Higher Level Martial Arts under James Doolan, Stevie owns a 3-0 record with all three of his his wins coming via knockout/TKO.

At On Top Frontline, Stevie defeated Wes O’ Neil via TKO in the first round. Then he defeated Scott Richards via TKO at On Top Weekender. In Poland’s Daniel Rutkowski, Stevie is facing a fellow knockout artist who owns a 3-2 record in five career bouts with all three of his wins coming via knockout/TKO. Daniel is coming off a second round TKO victory over Cameron Hardy at BAMMA 29 in May 2017. You can catch Stevie this Sunday August 13 in a live interview on MMA UK hosted by James Hamilton!