by Myles Painter
in Across The Pond
38 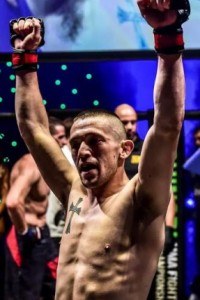 On November 10 at BAMMA 32, Irish submission specialist Richie Smullen will look to secure the BAMMA Lightweight title. A professional since July 2016 and representing SBG Ireland, Richie owns a 3-0-1 record consisting of two submissions, one knockout and a draw.

In his MMA debut at Shinobi War 8, Richie submitted Jay Moogan via heel hook in the second round. Then he tapped out Andrew Murphy via heel hook in round one at BAMMA 26. At Shinobi War 10, Richie defeated Jonny Saville via TKO. In Tim Barnett Richie is squaring off with a knockout artist who owns a 5-o record consisting of four knockouts and one submission. Tim is coming off a first round knockout of Mario Saeed at BAMMA 29 in May 2017.