by Lewis Smith
in UFC
27

British Heavyweight, Mark ‘The Hand of’ Godbeer will return to action in October, when he meets knockout artist Walt Harris on the main card of UFC 216, in Las Vegas. 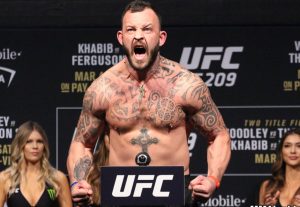 The former BAMMA heavyweight champion (12-3) will take on the American slugger, Walt Harris, in what is shaping up to be one of the best cards of the year at UFC 216. Both men come in to the bout highly touted, and both will have a real opportunity to make a statement in the worlds most dangerous  division.

Mark, UFC 216 goes down on October 7th where you’ll be facing Walt a Harris, how are you feeling about that fight?

MG: I’m feeling really good, and I’m really confident. I’ve said in the past, in my first couple of UFC fights I had the UFC jitters and the nerves got to me a bit, but for this fight I’m confident, and I’m having a great camp with a lot of good people behind me. I’m just looking forward to getting in there and proving a lot of people wrong.

I’ve spent the last ten years training my ass off, and now I’ve gotten to the point where I feel I actually belong here. I’ve gone through everyone in the UK, I’ve become BAMMA Heavyweight champion and gradually got to the UFC, so it feels great to be here now.

And what do you make of your opponent?

MG: There’s only one way this fights going and that’s someone getting knocked out. Walt’s got 10 KO’s, and I’ve got 9 KO’s so it’s going to be explosive. He’s very good. We’re talking about UFC level guys now, and everyone in the UFC is there for a reason. He’s a stand up guy and he’s a banger. He’s got great hands and boxing- but we’ve seen what he can do on the ground as well. This guy’s no joke so we’re preparing for all situations.

Did it give you confidence going a full 3 rounds in you victory over Dan Spitz last time out?

MG: Yes it has, it was unknown territory for me as I’ve always finished my fights early on. Going the 3 rounds was tough but it gave me the confidence to be on a big stage and go the distance. I know how to pace myself now and I know I can push a bit harder. I also know what sort of conditioning I need and what’s involved. We’re constantly learning in this game. 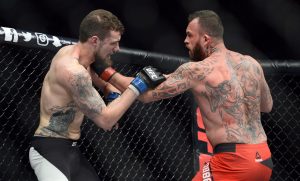 How much of a relief was it to get that win?

MG: It was a massive relief because I felt a lot of pressure going into that fight, as my debut didn’t go well at all. This is MMA, and in one mistake, in the blink of an eye the fight can be over. Going into my second UFC fight I felt my back was against the wall and I had to put on a performance.

Do you have a prediction for this fight?

MG: I think it’s going to be a technical fight because we’re both known for knocking people out. I think maybe it will be a bit tentative at first, and it will be down to whoever works out the others style. I’m going to KO him in the second round. Simple as that, and I’m going to shock a lot of people by doing it. I’m 100 percent confident in my ability as well as the people I’ve got around me. I feel like a new me going into this fight and I can see me KO’ing him.