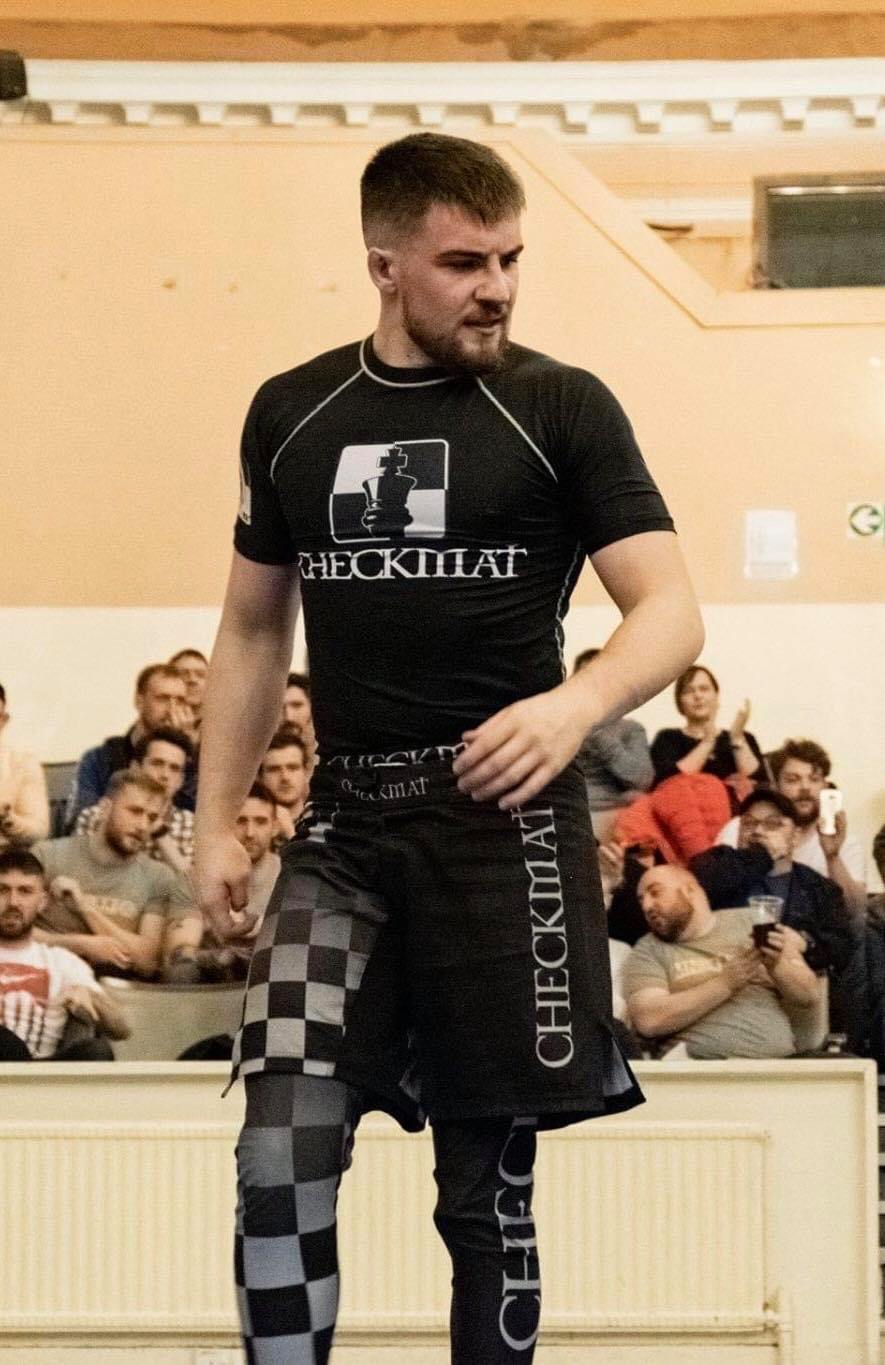 Jamie Harvey is one of the most accomplished BJJ competitors in Scotland rising through the ranks in Checkmat Edinburgh from its inception. With wins at Scottish Grappling Invitational, of which he is the current Heavyweight Champion, Edinburgh Winter Open and The Scottish Cup to name a few and has won gold in 4 different weight divisions so far. He was also on a nearly 3-year unbeaten run until Covid ground training and events to a halt.

I caught up with him this week to discuss his start in BJJ/MMA, the impact lockdown has had on his training and how a navy seal has helped his mindset. 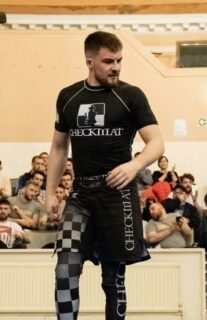 Larry: Hey Jamie thanks for speaking to me! Can you tell me how you first got into BJJ and what initially attracted you to it?

Jamie: Like many, it was MMA that got me into Jiu-Jitsu. I started training MMA when I was 15 after discovering it in the upstairs level of a small local gym I was attending to lose weight (BIG fat kid). I took a class and got my nose burst by literally the first jab that was thrown at me! I stuck with MMA for a few years, having two unsuccessful fights…ironically that I lost by submissions. I left for university in Dundee and didn’t do any martial arts training for a few years. Once I moved back to Edinburgh, I again joined my old martial arts team, now at a different location. They had just hired in a BJJ coach for to help with the team’s basic level of grappling skills, this was the first time I put on a GI (February 2016) and I got addicted right away.

Larry: You must have enjoyed that first class to not be put off by a burst nose on the first go! So what was it about the class that made you want to keep at it? Were you a fan of UFC at the time and go the inkling “I want to give that a shot”?

Jamie: No. I was aware of the UFC but I wasn’t a fan. The Combat Room of the gym was on the way to the changing rooms and while walking past I just noticed a group of people doing ground and pound drills (could have been sparring) and thinking “What madness is this? This looks like great fun!”. I knew the owner and coach for a long time, so I asked him about it after the class, and he said I should come and give it a go. Then I went home and watched hours of YouTube on it.

Larry: Great stuff. So how long did you train there and what made you move over to Checkmat?

Jamie: I trained at the gym for around 2 years until I moved away from Edinburgh. Once I returned the gym was still running, but the location had changed and then Checkmat Edinburgh originated from this gym, The Jiu-jitsu coach and a few others of our core group decided it was best to move on from the MMA gym and create a BJJ gym. This was in November 2017.

Larry: So you’ve been there pretty much from its inception in Edinburgh?

Jamie: Yeah, to have been there from the start and see it grow from a small handful of people to what it is now has been great to experience.

Larry: Oh yeah it must be a great thing to be involved with to see the team grow and strengthen over those years! 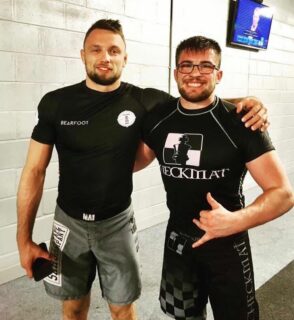 Jamie: It’s great to be able to roll with some of the guys now, who when they first walked could do nothing, and now have the skills and knowledge to be such valuable training partners.

Larry: Oh for sure! And to know you helped guide them and even see them get promoted and be competing as well must be a massive spike to your pride! So speaking of training, how has the lockdown affected your usual training and general mindset? From all accounts you were trucking along with some great wins under your purple belt last year, so with things grinding to a halt has the momentum taken a hit mentally?


Jamie: Lockdown has completely halted my training. I’ve not been able to have a proper training session since March. My girlfriend also trains Jiu-jitsu so we can do some stuff in the spare room which we have matted. This usually involves watching BJJ Fanatics videos and drilling the moves. I have also invested in a grappling dummy (Kaiba) to do more of this. Before lockdown and all this mess, I did not like competing at all. Hated the pressure it brought but without it, I realise how much I need it. I need to have a focus and a goal to be going for, otherwise, days just slip past with no real purpose.

Larry: Yeah unfortunately my girlfriend let me try it once with her then decided she wouldn’t offer anymore. So I am very jealous of your home set up. That’s very interesting, so do you see competing as more of a necessary part of the learning or that it is just a given that one competes?
Jamie: I put too much time and effort both on and off the mats (with study) to then not compete. I enjoy the wins and the feeling of success. I also don’t mind when I lose. It’s just the feeling before when you enter a venue and the waiting around that get to me. All my nerves disappear once the match starts. This can be a local comp, SGI or even the bigger shows down south that I’ve been on, the nerves have always been there regardless of the situation or prestige.

Larry: I think nerves are just a natural part of life and the pursuit of something you love. Looking over your social media you seem to push yourself a lot! Specifically, I noticed you challenging yourself with the book Living With A Seal and doing marathon runs. Has doing these types of things taught you anything this year you may carry into a new round of training once restrictions lessen?
Jamie: Yes. You always need to keep busy and work hard, and a sense of accomplishment when you do something extremely difficult is one of the greatest feelings in life. The David Goggins book also made me realise how much I could still give when training because I pushed my body to different levels copying the challenges of that book.
Larry: I totally agree! So with that in a post lockdown 2021 (a massive crossing of the fingers here of course) what are you hoping to achieve next year? Is there a specific goal you maybe had this year you want to chase fully once restrictions are lessened?
Jamie: Next year I’ll be looking to defend my SGI Heavyweight Title and keep my undefeated record and perfect submission rate. I also will be looking to get onto more of the submission only shows around the UK. ADCC UK Pro division at the end of next year is also on my radar!!
Larry: That’s great! I look forward to seeing you defend that title as you had some great matches to get that it! Would you say that winning the Heavyweight Title was a highlight so far? I also saw you had an over 50 competitive streak of wins last year, are there any other highlights or things you’re most proud of?
Jamie: Yeah definitely my biggest success thus far. Another big highlight of my BJJ journey involves Lycans/MNBJJ where you train Larry. I was brought in with less than a days’ notice to go to Ireland and be in the Lycans five-man team for a Quintet style tournament. We went onto win that tournament in dramatic and nail-biting style. I definitely think that the most pumped I’ve ever been after a win and it was amazing to experience it with such cool people who I’d only just met. 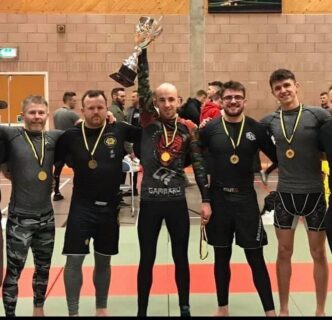 Larry: That’s awesome. The guys at Lycans plus you are a pretty formidable team as those guys are maniacs. In the best possible sense of course haha.
Jamie: Fantastic gym. Some of the best leg lockers in the country.
Larry: I agree but I am admittedly biased! Ok, the last question on a personal note. What advice as a purple belt would you give to someone newer on the mats?

Jamie: Don’t panic and ask questions. When rolling with someone they are not going to hurt you, you will be safe, stay composed and focus on the limited techniques that you may know. If it’s a higher belt they will likely work with you. After the ass-kicking or the end of class ask your partner anything you might have noticed during the roll and ask them on what you could have done better. This is the best way to learn.

Larry: Thanks Jamie for chatting! 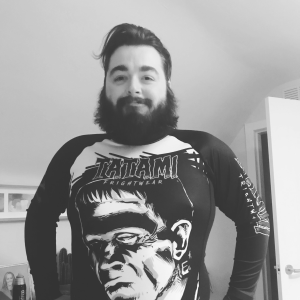