UFC 6: Clash of the Titans REVIEW

UFC 6: Clash of the Titans took place on the 14th of July, 1995, at the Casper Events Centre in Casper, Wyoming. 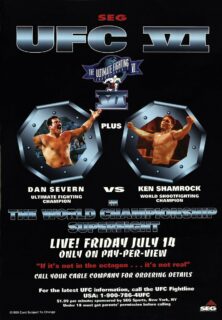 This was the first UFC event not to have any involvement from co-creator Rorion Gracie, this was because of the introduction of time limits which went against the Gracie’s code of Brazilian Jiu-Jitsu style that you fought until a finish. This sadly also meant that Royce Gracie withdrew from competing in the UFC.

The rules followed on from UFC 5 with the newly introduced time limits on bouts. We also saw a rule that the referee could stand the fighters up if they were inactive on the ground. UFC 6 again continued with the eight-man tournament format with the winner receiving the money. The main event was another Super-Fight Championship again featuring Ken Shamrock who fought to a draw with Royce Gracie in the first-ever Super-Fight in his last bout. His opponent will be Dan ‘The Beast’ Severn who won the previous tournament at UFC 5.

The commentators are again Bruce Beck, Jeff Blatnick and Jim Brown. The referee for the night was, of course, Big John McCarthy, and the new octagon announcer was Micheal Buffer.

Tank Abbott (MMA Debut) is the first fighter to enter the UFC with the style of ‘Pitfighting’ and is facing John Matua (MMA Debut) who is a 400lb fighter from Hawaii. The fighters apparently don’t like each other and both like to strike.

They fight starts and Tank immediately rushes in with landing big punches. Matua looks badly rocked, he goes down and comes back up and takes more punches, until finally, Tank drops him with a huge right causing him to crash to the mat, hitting the back of his head hard on the canvas. Tank follows in with a diving punch to the head and Matua is out cold.

What a debut from Tank Abbott! He landed some powerful hooks to the head of Matua before knocking him out. Doctors flood the octagon to attend to Matua and Abbott mocks him while he’s unconscious, an insane start to the tournament.

Cal Worsham (MMA Debut) is a Tae Kwon Do practitioner from California, he is facing Paul Varelans (MMA Debut) who is an undefeated bare-knuckle fighter who is 6’8ft and weighs 300lbs.

The fight starts and Worsham lands a side kick to begin, before they exchange some wild punches, with Worsham getting the better of it. They clinch and exchange knees, and then continue to just slug it out, with Worsham again landing the better shots. Worsham keeps coming, but suddenly Varelans lashes out with a huge elbow to the back of the head, and Worsham is out.

That was just a pure brawl, Worsham gave a great account of himself even though he was outweighed by 70 pounds. He was getting the better of the exchanges before the elbow that put him out.

Rudyard Moncayo (MMA Debut) is a karate expert from Ecuador. He is facing the UFC veteran Pat Smith (MMA 3-3, UFC 3-2) who competed in the very first UFC against Ken Shamrock and also reached the finals of UFC 2.

The fight starts and Smith sprints right across the Octagon and drops Moncayo with a front kick to the chest! Moncayo comes back up and Smith grabs a headlock and punches at the body, looking for a guillotine. Smith takes him down into a mount, and Moncayo rolls and stands at the same time, so Smith jumps on him and drags him down into a nasty rear-naked choke for the tapout.

Smith proving he has been putting in the work to improve his grappling skills. He states after the fight “If you can’t fight on the ground, you can’t fight.” Very impressive finish from Smith.

Dave Beneteau (MMA 2-1, UFC 2-1) fought in the UFC 5 final against Severn but competed as an alternate originally. Oleg Taktarov (MMA 4-1, UFC 1-1) also lost to Severn at UFC 5 but showed promising grappling skills and was billed as the master of submissions.

The fight starts and Beneteau tries a single leg to begin, he takes some punches but takes Oleg down to guard. Beneteau stacks up but Oleg stands and gets a front facelock, so Beneteau breaks out by landing some heavy punches. Oleg gets a single leg and they go down, they scramble for a second before Oleg gets a guillotine, it looks tight and Beneteau taps out.

Taktarov the master of submissions indeed finishing the fight with a brilliant guillotine choke. Beneteau started the fight well-landing punches and takedowns but Taktarovs grappling skills again advances him to the Semi-Final.

Tank Abbott (MMA 1-0, UFC 1-0) only took 20 seconds to dispose of his opponent in the Quarter-Final and will be the fresher fighter. Paul Varelans (MMA 1-0, UFC 1-0) took more damage in his fight but again has a size and weight advantage.

The fight starts and Tank lands a big right hand to open, shoving Varelans into the fence and gets a takedown to half-guard. Varelans lands some elbows from the bottom, but Tank starts dropping punches. Varelans tries a guillotine but Tank powers out and pounds away, he then pushes his knee down on Varelans head using the cage to press it up against the fence. Jim Brown points out that Abbott has a huge grin on his face while he’s doing it. Tank lands some more big shots while pressing his knee into Varelans head and McCarthy has seen enough and stops the fight.

A nasty showing from Tank Abbott, he was on Varelans from the start with heavy punches that looked to overwhelm him. The brutal knee pressing down on the head prompted the referee to end the fight.

Pat Smith was unable to continue due to stomach cramps so he will be replaced by Anthony Macias (MMA 1-1, UFC 1-1). Oleg Taktarov (MMA 5-1, UFC 2-1) is training partners with Macias and so is Guy Mezger the other alternate which isn’t ideal for the tournament.

The fight starts and Macias charges right across the Octagon to attempt a takedown, Taktarov looks for the guillotine and gets it! That was over fast! The quickest fight and submission in the UFC thus far.

That was over quick! One has to question that Macias really wanted to be in there with his friend as he gave up the neck easily for the guillotine choke. One positive is that Taktarov will be fresh for the final against Tank Abbott.

The two veterans meet here to try and determine the first ever Super-Fight champion. Dan Severn (MMA 5-1, UFC 5-1) is coming off winning his first tournament at UFC 5 and also reached the final of UFC 4. Ken Shamrock (MMA 17-4-1, UFC 3-1-1) fought to a draw with Royce Gracie at UFC 5 in the first ever Super-Fight, many believing that Shamrock would’ve won had it gone to a decision.

The fight starts and Ken shoots in to begin and Severn blocks, they go into an upper body lockup and muscle around the cage. They look evenly matched in terms of strength before Ken breaks with a knee. They lock up again and this time Severn tries a takedown, Ken muscles him off and actually outpowers him, showing great strength. Severn ducks his head for a takedown and Ken grabs a guillotine, Severn pops out and they scramble back into the lockup. Severn pushes him into the fence and attempts another takedown and Shamrock gets another guillotine, this time it’s tight forcing Severn down, and Severn’s forced to tap out! Shamrock is the new Champion!

A great performance from Ken Shamrock who showed his grappling ability by stuffing Severn’s takedown attempts. It looked like Severn got desperate in looking for the takedown and left his neck exposed to the guillotine choke. Ken Shamrock is the first UFC Super-Fight Champion.

The finals of the tournament and it’s the pit fighting striker in Tank Abbott (MMA 2-0, UFC 2-0) against the submission wizard Oleg Taktarov (MMA 6-1, UFC 3-1). Both fighters spent a relatively short amount of time in the octagon so this should be an intriguing matchup.

The fight starts and Oleg tries a takedown immediately, but Tank blocks and they go down into Oleg’s guard. Tank stands and they come back up into the clinch where Oleg tries a guillotine, Tank muscles out pretty easily. Tank throws some heavy punches that rock Oleg but he covers up before grabbing a clinch to slow things down. They exchange some punches, and Taktarov’s lip is busted open at this point. Oleg tries another single-leg, Tank blocks and they clinch again, muscling around while Taktarov lands some nice uppercuts. Taktarov tries the guillotine again and it looks tight this time, he pulls guard for leverage, but somehow Tank escapes! Both guys looking really tired at this point. Oleg lands some weak punches from his back, and Tank responds with some shots of his own. Taktarov tries a triangle choke, but Abbott escapes and then avoids a sweep to follow. Tank tries to stand, so Oleg tries an oma plata, but Tank sits on his chest and spins out, avoiding a leglock in the process. They stand and exchange, and Tank rocks him with some more heavy punches, then grabs a headlock as they re-enter the clinch. Tank muscles him to the fence, and they go down into Taktarov’s half-guard before Oleg gets full guard back. They lay there for a while, both understandably tired at this point, before Oleg tries a triangle, punching away at the head in the process. Tank works and escapes into side mount before they go back to guard. We get another slow recovery period, before Tank gets a second wind and starts to slug away again, but then they slow down once more. This time McCarthy decides to restart them, and Tank swings his way into a clinch and muscles Oleg into the fence. Tank throws a haymaker left, but Oleg avoids and catches him in the guillotine again, and suddenly Tank looks totally drained again, as Oleg forces him down to the mat. Tank escapes but he’s absolutely done at this point, Oleg takes his back and gets the hooks in and locks on the rear-naked choke and Tank taps! Oleg Taktarov is the winner!

A long gritty battle for the final with Taktarov showing great heart to overcome the big brawler Tank Abbott. Taktarov struggled in parts taking shots and being taken down but stayed in the fight and fought through fatigue to finish Abbott. Oleg Taktarov is the new UFC tournament Champion.

UFC 6: Clash of the Titans was a coming-out party for new stars such as Oleg Taktarov and Tank Abbott. The tournament was entertaining as we saw the raw knockout power of Abbott and Varelans but also the grappling skills of Taktarov. The event reminded us again that the grappling style and discipline is something that overcame the aggressive brawling style of fighters such as Tank Abbott. We also saw a newly crowned Super-Fight Champion when Ken Shamrock defeated Dan Severn in an entertaining matchup of grapplers.

Fight of the Night: Oleg Taktarov vs Tank Abbott

Knockout of the Night: Tank Abbott

Submission of the Night: Oleg Taktarov

Performance of the Night: Oleg Taktarov