Morgan Charriere vs Jordan Vucenic where to begin!? The walk-in from Charriere sent shivers down your spine like he always does with his entrance, The Frenchman looked relaxed and comfortable entering the octagon and also inside of it. Charriere experience and power had a lot of people thinking were this a little too soon for Vucenic to step into and thinking was it the correct decision to take this fight, but he proved a lot of people wrong and put on a very professional and smart performance.

The first round for Jordan couldn’t have gone any better being honest with his striking hitting home and being in control of the fight early on. The striking of Vucenic early doors was excellent allowing him to build up for combinations which were being very successful and catching Morgan by surprise how quick and precise Jordan’s striking is, doing this clearly settled some nerves, A couple of takedown attempts from Charriere were controlled and easily broken up from Vucenic, Ending of the first round brought both young fighters to each corner with Jordan looking calm and Morgan looking more surprised of how the first round went.  The second round brought Morgan to come straight out from the blocks early doors to try another takedown attempt, But again Jordan just looked so comfortable with these attempts from Charriere and wasn’t afraid to exchange punches with him when needed. Towards the end of the second Morgan was coming into the fight a lot more which you could clearly see was improving his confidence. The third and fourth round showed us all why Charriere was the champion and showing some incredible head movement with some fantastic combinations that were consistently hitting home and slowly turning the match on its head again. Especially in the fourth Morgan showed that explosive power we all know he has which got him 2 successful takedowns and looking more dominant, Applying that power by grappling with Jordan on the cage trying to drain him of energy to force an opportunity for a takedown.

Championship round! the fifth and final round was a rollercoaster of emotions making both fighters put it all on the line and show cage warriors why they deserve that belt around the waist. As mentioned previously with the fight being so close as it was Jordan being dominant the first two rounds and Morgan being on top in the third and fourth, The fifth round was just both fighters throwing big punches constantly and trying to make a difference, The tension between the two fighters in the last round was nail-biting as they were just so on par until the final minute when Morgan put on a flurry of strikes connecting so well into Jordans mid-rift and a left hand hitting straight down the pipe. It was Jordan though who finished the closing seconds of the fight with an enormous amount of energy throwing everything at Charriere and screaming in the champions face THAT’S MY BELT! Brilliant fight right till the end.

Only one could come out victorious though, AND THE  NEW! Featherweight Champion Jordan Vucenic! 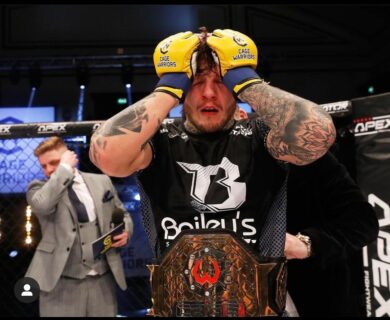