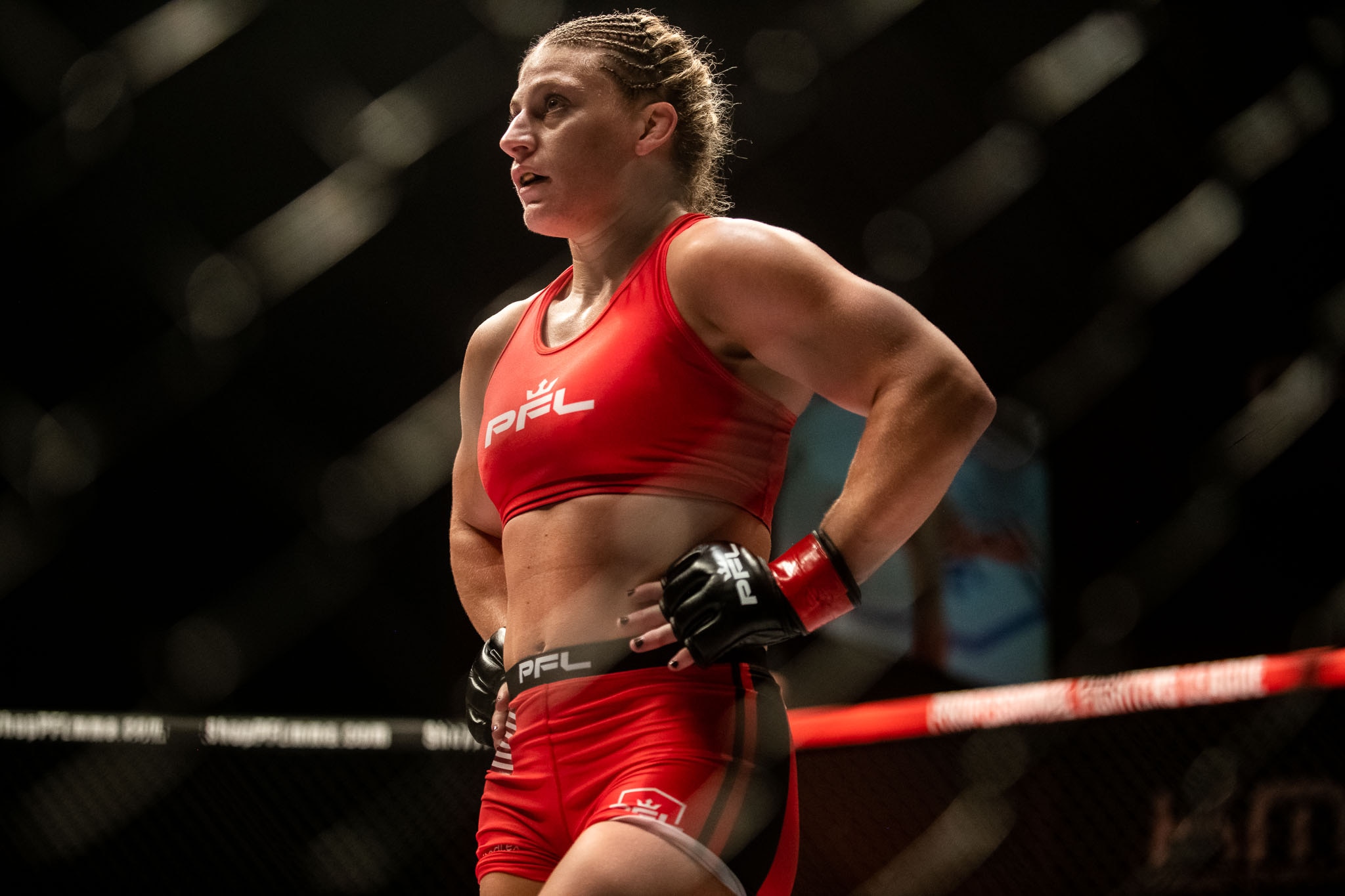 Who’s Next for Kayla Harrison?

To be the greatest of all time is no easy feat. One woman in particular seems determined to achieve that coveted GOAT status however. If anyone has shown that hard work and determination can be translated into undeniable success, it is Kayla Harrison. As Harrison said herself, “when you work hard, winning is easy”.

Harrison has already proven herself to be one of the best judokas in the world. She is the first and only American judoka to claim gold at the Olympic Games, a feat she managed to accomplish twice. Her success at the Olympics in 2012 and 2016 is not her only achievement in Judo however, with Harrison also winning the 2010 World Judo Championships as well a capturing gold medals at the 2011 and 2015 Pan American Games.

In 2021, Kayla Harrison is gearing up to win the PFL title for a second time. In fact, Harrison made a statement at her recent season debut by demolishing Mariana Morais at PFL 3. It only took one round for Harrison to take her opponent down, lock Morais into a defenceless position and reign down brutal ground strikes until the referee stepped in.

In her post-fight interview, Harrison made it clear to her rivals that this PFL season was not a contest but a “coronation” and that she was “the baddest woman in this room and any room”.

MMA UK asked Harrison what being the PFL Women’s Lightweight Champion meant to her, considering that the women’s lightweight division is the only division of her kind in professional MMA.

“It is a huge honour for me, it’s a responsibility that I don’t take lightly. I do realise that women’s MMA is still a growing thing, it’s the fastest growing sport in the world but if you’re not exciting and you’re a bigger woman then people are going to say it’s a stupid weight class and they shouldn’t have it and blah blah blah blah blah, so for me there’s a lot of pressure, it’s a big responsibility and it’s my job to go out there and make this as exciting as possible and be so good that people can’t ignore it and to be honest, I’m proud, I’m proud that the PFL and I created together a division where great athletes like Larrissa [Pacheco], like Claressa [Shields], where all of these girls, women, can compete and show the world their skillset” Harrison told MMA UK.

Being in the baddest woman in any room is a huge task and a massive accomplishment, especially when woman’s combat sports is currently producing some of the greatest fighters in the world, regardless of gender.

UFC President Dana White expressed his scepticism at Harrison’s ability to compete with the best fighters in the world. “I don’t know if she’s ready,” White said about Harrison when speaking to TSN. “I mean, when she feels like she’s ready, I’m always looking for the best possible people to come in and fight. If you don’t think that we’ve offered her to come over. I just don’t know if her people think she’s ready yet. It’s a whole other level when you get here”.

MMA UK looks at some of the biggest names that are potential match ups for the undefeated Kayla Harrison. If the gold medallist Judoka and PFL Lightweight Champion can defeat these fighters, her GOAT status would be undisputable. 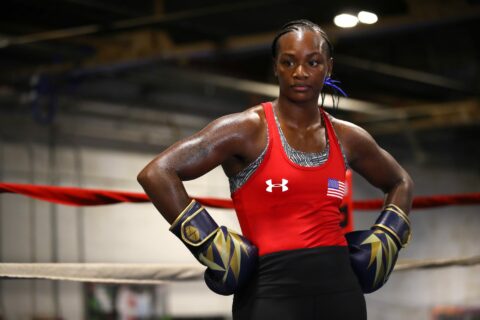 Another fighter in the PFL Women’s Lightweight division with a huge amount of attention on her is boxing world champion Claressa Shields. Shields’ success in boxing has given her a lot of hype before she has even made her MMA debut, scheduled for PFL 4 on June 10th. ‘T Rex’ was undefeated in her professional boxing career and has held world championships in three different weight classes, including the undiFsputed female middleweight title.

The Michigan native also holds the records for becoming a two-weight and three-weight world champion in the shortest number of fights. The Ring and BoxRec rank Shields as the best active female light middleweight whilst ESPN ranks her as the pound for pound best female active boxer on the planet and The Ring ranks her the second best pound for pound.

With a boxing CV such as hers, how could any combat sports fan not be intrigued about Shields’ upcoming mixed martial arts debut?

Like Harrison, Shields is a two-time Olympic gold medallist as well as winning gold at the AIBA World Boxing Championships twice. Shields also captured gold at the 2015 Pan American Games, just like her rival Harrison. Shields is undefeated in her boxing career of 11 fights, winning 2 of those fights by knockout. Another thing Shields and Harrison share is their desire to go above and beyond their success in their original martial art by dominating the world of MMA.

The clash between judo and boxing would be an interesting match up stylistically, although Harrison is proving herself to be much more than a world class judoka. Shields’ mixed martial arts skills are yet to be seen however and a loss at her debut could leave the idea of Shields vs Harrison up in smoke. Although Shields’ accomplishments speak for themselves, hype trains often get derailed in MMA. We will have to wait and see how T-Rex handles her debut on June 10th. 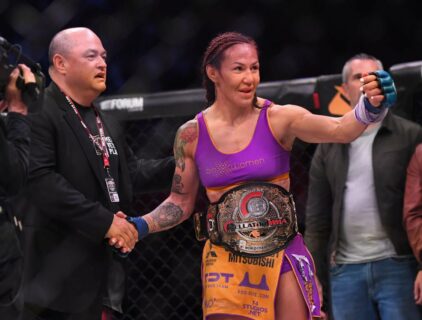 MMA fans will be well aware of the legendary Cris Cyborg. The current Bellator Women’s Featherweight Champion was also the UFC, Strikeforce and Invicta Featherweight Champion at one stage. Cyborg holds a record of 23 wins, with 18 of them being knockouts and 1 of them being a submission. She has only lost twice in her career, with one of those losses coming from Amanda Nunes, so Cyborg can hardly be blamed for that loss.

Although Cyborg has called out Kayla on numerous occasions, the fight has never come to fruition. As a result, Harrison has publicly said that she believes that Cyborg is all talk. That being said, Cyborg is still calling Harrison out, even after her most recent flawless victory. It is unclear whether the fight would happen at featherweight or lightweight. Cyborg has said in the past she is willing to move up to lightweight for a one-off bout with Harrison, whilst Harrison has fought at featherweight previously so fights at either weight is theoretically possible.

Although the fight hasn’t become a reality yet, the trash talk persists so never say never to Harrison vs Cyborg. 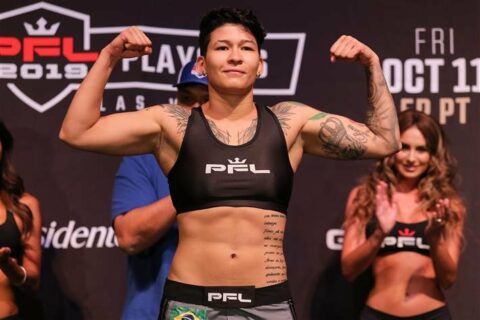 A more likely opponent for Kayla Harrison, although this match up probably won’t have as much hype compared to the other potential match ups, simply because Harrison has already defeated Pacheco. They fought each other in 2019 for the inaugural PFL Women’s Lightweight Championship and although the fight went the distance and to the judges’ scorecards, Harrison made sure that the judges would not have a hard time deciding this one. Harrison was dominant the whole fight and took Pacheco down on numerous occasions.

However, it might be the case that Harrison and Pacheco will be destined to face each other again this PFL season. Like Harrison, Pacheco earned a quick six for a first round finish at PFL 3. Pacheco knocked Julia Pajic out cold just under a minute into the fight. If both Harrison and Pacheco continue this momentum and Claressa Shields or another fighter doesn’t shake things up, a rematch between Harrison and Pacheco for the title looks increasingly likely. 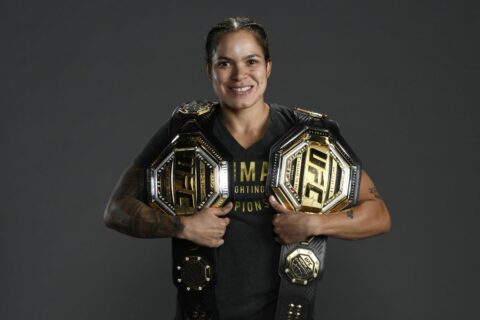 Nunes has beaten the best of the best. Ronda Rousey, Cris Cyborg, Holly Holm, Valentina Shevchenko, Miesha Tate, Germaine de Randamie, Felicia Spencer and Megan Anderson have all been defeated by The Lioness. Considering that Nunes has effectively cleared out both the women’s featherweight and bantamweight divisions during her rise to champ-champ status and women’s GOAT, it’s no surprise that a fighter from outside of the UFC is being suggested as a potential opponent.

Harrison calls herself the baddest woman in any room. The irony is that Harrison actually is in the same room as Nunes, as they both train together at American Top Team in Florida. However, Harrison has a genuine, unwavering belief that she is the best of the best and the evidence is slowly but surely stacking up, unless someone can prove her wrong.

A potential fight between Nunes and Harrison would probably have to be at featherweight or maybe a catchweight bout, unless Nunes decided to make a move up to lightweight to further cement her legacy as the women’s MMA GOAT. Questions still remain over whether Harrison would have to be signed to the UFC first in order to have a chance of fighting Nunes and settle the GOAT argument. As Harrison’s success continues however, the calls for Nunes vs Harrison grow louder and louder.

“It doesn’t annoy me when people call her the GOAT at all. I’m going to say that’s false for a couple of reasons,” said Harrison. “Number one, she is the GOAT for now. Number two, she is beating the demolished opponents for quite some time. She has just been overwhelmingly dominant. And number three, I actually do like and respect Amanda. I think she’s a great champion inside the cage, outside the cage. I think she is another person that I look up to. But I take offence when people say to me…Like what am I supposed to be chasing second best? What am I supposed to be? Oh, you keep that GOAT status, I’m just going to be the best in the PFL or I’m just going to be the best at 155. No, That’s not who I am, that’s never been who I am”, Harrison explained.

“I’ve made it clear from day one, I’m not in this to be mediocre. I’m not in this for a paycheck, I’m not in this for anything other than to chase greatness, continue building my legacy. I’ve already done things that people can only dream of and I did it twice” before later concluding that “It’s not personal towards Amanda. But of course I want to be the best, that’s just who I am”.