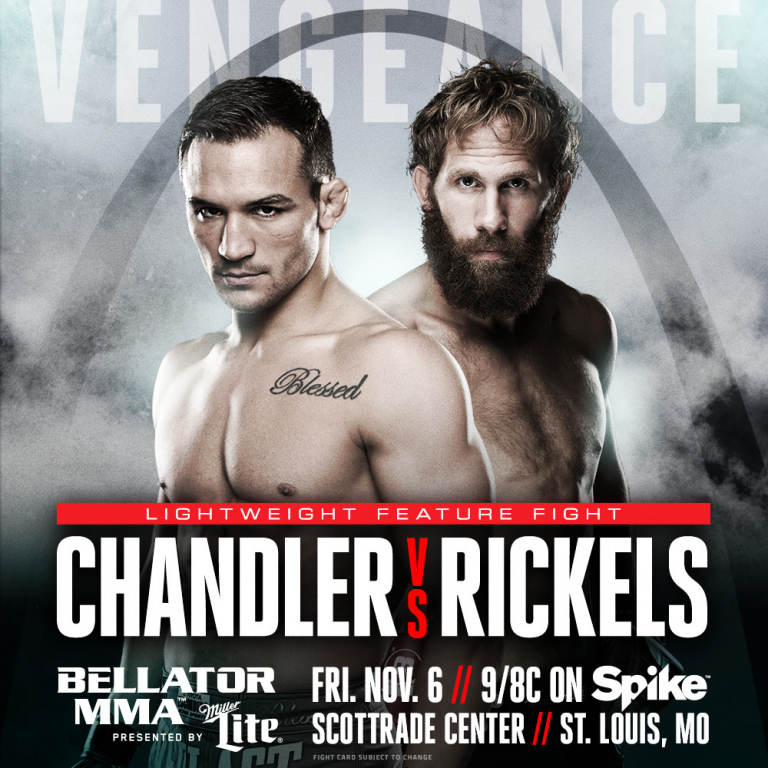 Bellator MMA continues to stack the deck for its return to Scottrade Center in Saint Louis on November 6, when former lightweight champion “Iron” Michael Chandler (13-3) meets David “The Caveman” Rickels (16-3, 1 NC) in a rematch that takes place during the main card of “Bellator 145: Vengeance,” which airs live on Spike at 9 p.m. ET/8 p.m. CT.

Tickets for “Bellator 145: Vengeance,” which start at just $30, are on sale now at Ticketmaster.com and the Ford Box Office at Scottrade Center. Doors for the event open at 5:00 p.m. CT local time and the first contest takes place shortly after.

After dropping fights to the current divisional kingpin, Chandler bounced back with a highlight-reel worthy finish of Derek Campos at the record setting “Bellator 138: Unfinished Business” event in July. “Iron” Mike recently left his longtime home of Alliance MMA in San Diego, Calif., to link up with Power MMA in Arizona. A favorite of Saint Louis, Chandler will have his home state of Missouri strongly in his corner on November 6.

Coming off a controversial, yet dominant performance against John Alessio in the main event of “Bellator 139: Kongo vs. Volkov,” Rickels looks to wipe the bad taste of a no-contest out of his mouth in a rematch against Chandler. Having already faced his Nov. 6 opponent at “Bellator 97: Chandler vs. Rickels” in 2013, “The Caveman” will have more than just title hopes on his mind. It’s also worth mentioning that this will be the first time Rickels will compete on a “tent-pole” event under Scott Coker, which means there could be a can’t miss walkout at “Bellator 145: Vengeance.”