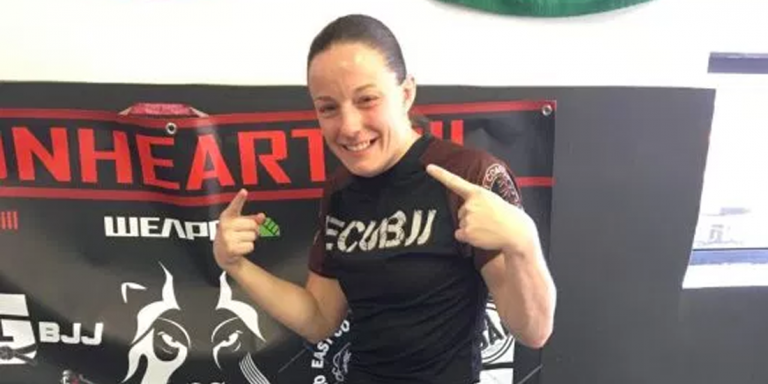 Kerry Stellar from In The Girls Corner interview with Jillian ‘Lionheart’ DeCoursey, for her professional debut with Invicta FC

Hey guys this is Kerry Stellar from In The Girls Corner, and I am here at (East Coast United Queens Academy), with Jillian “Lionheart” DeCoursey.

KS – And I just wanted to say, one congratulations on signing with Invicta, I know you’ve been waiting a long time.

JD – Yes I have, it’s definitely been a while in the making, but finally it happened.

JD – Well I technically, I had my first fight in September of 2014, but I started training Jiujitsu, probably like, I want to say like, 8 years ago, and that’s kind of where I started. Then I started to mix in Muay Thai a little bit, then I got really into competing Jiujitsu, kinda Muay Thai fell by the side. You know, once I started fighting, I started getting back into everything. 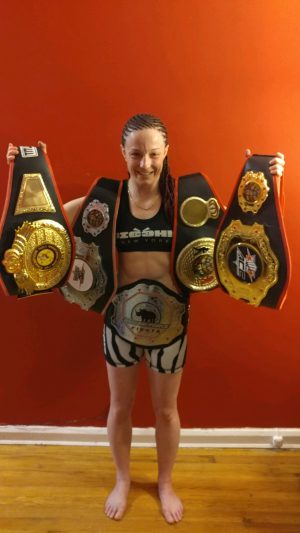 KS – And who was your first fight for?

JD – Aggressive Combat Championships, and I had fought Destiny Quinones.

KS – That was your first fight?

KS – Wow that is amazing, now you fought at Strawweight correct?

KS – Now, how much more comfortable are you at AtomWeight?

JD – Oh, I’m so much more comfortable, I feel that’s where I belong. At Strawweight I was trying to gain weight to fight.

KS – I was gonna say you look like you walk around at about 110 which is probably not a crazy weight cut for you.

JD – Yeah I mean well now that I put on some muscle I usually walk around at 115 or so. 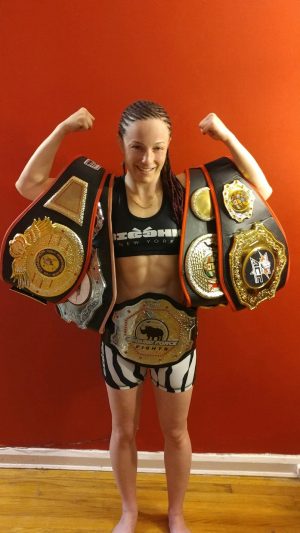 JD – Yeah no it’s not too bad, I usually do about 5 and water, so that it’s easy to put back on the weight, and then you step in the cage a lot heavier so…
At Strawweight I was definitely, you can, you can look at the pictures from my fights, I was way smaller than my opponents. I mean I really didn’t feel it, the only fight I actually felt smaller was the fight I lost, and that was just because I didn’t have time to really train for it. I took it on a weeks notice, and it was like alright, I didn’t have time to build muscle and do my whole little routine.

KS – I was going to say, you always look like you’re ready to fight, like you never, you’re like I could get in there right now, just put me in coach, give me a person.

JD – Yeah but it’s like, I guess the whole mental aspect and, as soon as I know a fights coming up, it’s very different how I eat, just everything I do and that kind of gets you into the flow. If I’m eating crappy, I might look like I’m in shape, but I don’t feel it, so.

KS – Cause it does weigh you down a little bit…

KS – How much changes, and what changes in a fight camp, as do regular training, when you’re training kids, and training yourself? 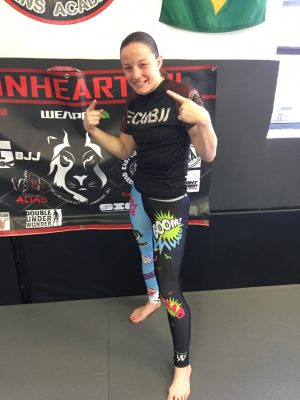 JD – Pretty much once we start fight camp, I still teach, and I still go to work, and I still do everything I have take care of my responsibilities. The difference in the training cause I train most of the time anyway, is that, we add in some extra work outs in the morning, I make sure I’m running all the time. Instead of just, eh when I feel like it. We do a lot more sparring, and my training, its mainly my training partners that have to adjust and train. I don’t really train with a lot of people that do straight MMA, I have a lot of people who are just willing to jump in and let me train. They king of adapt, so they start putting on the gloves, start doing MMA style rounds with me.

KS -How do you get in your head, cause your so balanced, how do you get there to be so violent cause I’ve seen your fights and they’re awesome, I’ve had the pleasure of seeing one of Jillians last amateur fights.

JD – You saw the one in December?

KS – Yeah that was a beautiful fight.

JD – Lindsey is awesome, she was actually one of my favourite fight. It was such a fun fight, she had such a good personality, that after, now we are friends. That’s always good when that happens.

KS – You teach, do you teach all ages, or just younger kids?

JD – Yep, pretty much I’ll teach anywhere from like, our four year olds, all the way up to our teens, and then myself, and my teammate, Bianca’s a black belt, we kind of take all the new females under our wing, and get them going. Nope, I didn’t start Martial Arts until I was an adult, as a kid I did every sport you can think of. When I was really young, I think five or so, my parents had me in dance and that was horrific. I think my only memory of that is, during the recital me sitting on stage pouting, and messing up everybody else’s dance, which I think is really awesome that I did that. 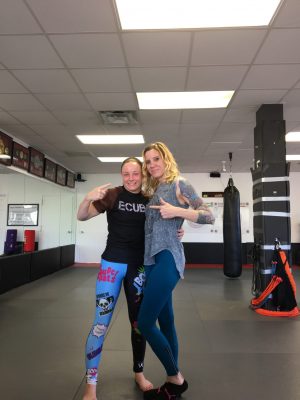 KS – I love that, I can see you sitting there like this, mean face.

JD – Yes, I actually started playing basketball in college, I had gotten a scholarship, that is how I paid for college.

KS – That’s amazing. Where did you go to college?

JD – I started at the university of Bridgeport, and finished at Hunter.

KS – That’s amazing. Back to Women’s Mixed Martial Arts, you’ve really seen it since it’s inception, you’ve seen it grow so much, how amazing is that?

JD – It’s really awesome, because it’s getting so much respect now. Most people want to see the female fights, over the guy fights, which is definitely really cool, even as an amateur people hear there’s a female on the card and their like oh yeah we wanna get there we wanna watch it.

KS – How amazing is it to be signed by Invicta FC?

JD – It’s starting, to sink in now, it definitely was pretty surreal, obviously I knew before I was able to announce it and everything. But I didn’t, I kept telling my manager, like no, it’s not real yet. He’s like what do you mean it’s not real? I’m like, no it’s not real. As soon as the announcement came out he’s like is it real now?

KS – Are you finally there with the realness?

JD – Yes it’s definitely pretty awesome, because for Atomweights it’s the place to be.

KS – I was gonna say they have a nice Atomweight division which a lot of pro fight leagues don’t, so to speak UFC doesn’t yet, Bellator doesn’t yet, as far as I know. I know UFC was talking about putting other weight classes in for the men, I can only assume since they’re now putting in a Flyweight that they would put in an Atomweight, it would be kind of foolish not to.

JD – Yeah which definitely would be awesome. Timing wise it would be pretty cool, because then I get my fights in and see what happens from there.

KS – Do have anybody you want to fight, anyone your eyeing up, do you know when your debut is going to be? 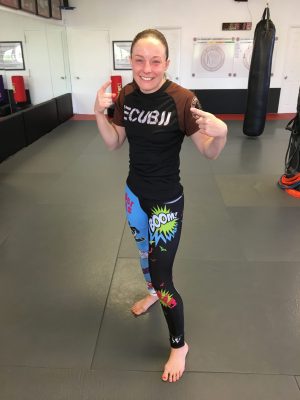 JD – No I don’t know any of that, I don’t know when the first fight is going to be, it’s definitely goin to be in 2017. I have to wait to see, we are already kind of starting to get ready, so whenever the call comes I’m ready to go.

KS – Maybe I’ll be able to make it out there and see one of your fights which would be the coolest thing, getting to see one of your last amateur and your first pro.
Now, what inspires you to do everything you do, you do a lot, you work, you teach you train…
What drives you?

JD – The satisfaction you get, from knowing that, in my one professional my practice it’s helping people and knowing you’re making a difference in their life. As far as fighting goes you still make an impact on so many people. I have people that just reach out to me or even at fights or random places

KS – Before we wrap this up because I know you have to train the kids, I want to know a little bit about your sponsors, is there anyone you want to thank?

JD – I mainly want to thank my coaches, Rob Gutierrez coach at East Coast United, and Eric Ruiz is my Coach out of Ring Sport Muay Thai, they help me so much, and give me so much attention, really work out every detail, without them guiding me I wouldn’t be signed to Invicta. My teammates at East Coast United and Ring Sport, I have some of the top Jiujitsu girls and Muay Thai girls to help me. My manager Jason Adams at Underdog MMA Management, he’s in the background all the time but does so much people don’t know. I do the work on the matts, he does everything else getting me sponsors, anything I need he gets it. All my sponsors, I got a lot, Fighter Alias, Michelle’s Magic Morsels, Double Under Wonder, Sicchic, Weapon Fight Gear, Grit Mouth Guards, GI Soap, and Fight Prep.

FOR MY FULL INTERVIEW WITH JILLIAN PLEASE CHECK OUT THE YOUTUBE VIDEO!