PFL 3 Takes Place on Thursday, May 6 in Primetime Across ESPN Networks and Streaming Platforms.

Making his highly anticipated PFL debut, Rory “The Red King” MacDonald defeated Curtis Millender, landing several significant strikes before locking in a rear-naked choke to emerge victorious in his maiden appearance inside the SmartCage. With a vicious body slam, Ray Cooper III handed Jason Ponet a swift submission defeat in the first round as he started his mission for a repeat title in the Welterweight division. Cezar Ferreira, meanwhile, secured the second-fastest knockout (0:37) in PFL Light Heavyweight history with a flurry of punches to take down Nick Roehrick with an epic first-round knockout.

“Tonight was another thrilling event as we saw Cezar Ferreira make PFL history and Rory MacDonald winning in dominating fashion,” said Peter Murray, CEO of the PFL. “Our world-class fighters showcased their determination and grit that they’ve been preparing for and the action did not disappoint. We delivered to our fans exceptional never before seen content including MMA SmartCage gloves and continued our innovative fighter tracking and performance rating data. I look forward to watching PFL 3 carry the same energy.”

“PFL 2 carried the momentum from our season debut, and I couldn’t be prouder of our Welterweights and Light Heavyweights for putting on a world-class show for our viewers worldwide,” said Ray Sefo, President of Fighter Operations of the PFL. “Our fighters have come into the cage extremely prepared and poised, and the can’t-miss action illustrates how passionate these fighters are to taking the next step in the 1 million-dollar chase. I am eager to see the season continue to unfold next week.”

In a hard-fought matchup, Emiliano Sordi defeated Chris Camozzi by a unanimous decision. Sordi wins his 6th fight in a row, the first decision win of his career. Elsewhere on the card, Joao Zeferino defeated Gleison Tibau by unanimous decision to secure his fourth straight win in the PFL. With a fierce takedown, Antonio Carlos Jr. defeated Tom Lawlor by 1st round submission, earning 6 points in the PFL Light Heavyweight Division.

Starting off the ESPN+ card, Marthin Hamlet defeated Dan Spohn by 2nd round submission, using his signature arm triangle chokehold, earning him his first win in his PFL debut. Sadibou Sy vs. Nikolai Aleksakhin ended in a no contest, as Aleksakhin was medically unable to continue due to an accidental foul. Per PFL League Rules, in the event of a no contest, both fighters earn 1 point in the standings.

All PFL 2021 Season events are live in primetime on ESPN2/ESPN+ and ESPN3 (Spanish), as well as on a wide and diverse group of premier global distribution partner platforms reaching 160 countries around the world.

Rory MacDonald def. Curtis Millender by Submission (rear naked choke) at 3:38 of Round 1

Ray Cooper III def. Jason Ponet by Submission (Arm-triangle choke) at 1:23 of Round 1

Antonio Carlos Junior def. Tom Lawlor by Submission (guillotine choke) at 4:43 of Round 1

Cezar Ferreira def. Nick Roehrick by KO (punches) at 0:37 of Round 1

Sadibou Sy vs. Nikolay Aleksakhin ends in a No Contest (accidental eye poke) at 1:56 of Round 2

Marthin Hamlet def. Dan Spohn by Submission (arm-triangle choke) at 0:52 of Round 2 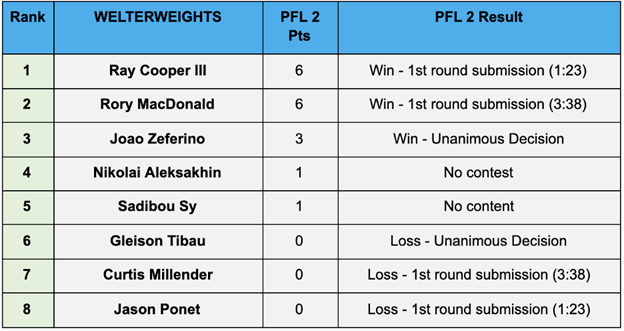 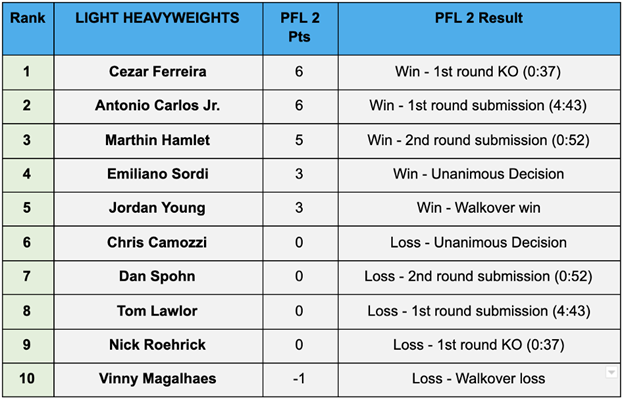