The night’s main event saw Cappelozza defeat Stuart Austin by first round TKO. Cappelozza continued his winning ways with his fifth consecutive victory, with four of his last five wins coming by way of knockout. Cappelozza earned six points in the Heavyweight standings and took his first step towards a return to the PFL Playoffs.

Renan Ferreira entered the PFL SmartCage on a mission, and defeated Jamelle Jones by 1st round KO in 25 seconds, marking the fastest knockout in PFL Heavyweight history. Ferreira broke the previous record of 31 seconds, which he set last season. “Problema”, the tallest fighter in the PFL at 6’8, was impressive and currently sits atop the Heavyweight standings, after his 7th career knockout.

“The PFL continues to deliver the best action in MMA to fans around the world,” said Peter Murray, CEO of the PFL. “PFL’s unique season format makes each fight a must win contest and brings out the best in our world-class athletes. Next week, at PFL 3, we move to the midway point of the season with one of the biggest cards our sport has ever seen.”

“Tonight at PFL 2 the Heavyweights and Featherweights brought action and intensity to the SmartCage,” said Ray Sefo, President of Fighter Operations of the PFL. “MMA fans around the world saw thrilling tactical fights as well as highlight reel knockouts, action that is consistently on display from PFL’s world-class athletes.”

2021 PFL Featherweight Semifinalist Brendan Loughnane made his 2022 season debut in a contest with Ryoji Kudo. The bout was stopped at the 3:00 mark of the 3rd round due to an accidental headbutt, with Loughnane earning the victory by technical decision. Loughnane, who fights out of Manchester, England, moved his career record to 22-4-0.

To begin the main card, Denis Goltsov wasted no time and took home a quick six points in the Heavyweight standings, defeating Cody Goodale by 1st round TKO. Goltsov, a two-time PFL Semi-finalist, earned his 13th career knockout, with 23 of his 28 career wins coming by way of stoppage.

Bubba “Bad Man” Jenkins returned to the PFL SmartCage in a matchup against Kyle Bochniak. Jenkins, a 2021 PFL Featherweight Semifinalist, took the unanimous decision. The result improved his career to 17-5-0, earning him three points in the standings.

Leading off the action in the Heavyweight division, Klidson Abreu squared off with Adam Keresh. The contest went the three-round distance, with Abreu defeating Keresh by unanimous decision. Abreu earned three points in the division and handed Keresh his first pro loss.

Continued action saw Sheymon Moraes face off with Boston Salmon, PFL Challenger Series week 4 contract winner. Moraes took the fight to Salmon, and came out victorious via unanimous decision, and earned 3 points in the Featherweight division. Moraes is on a three fight win streak in the PFL.

Kicking off the card on ESPN+, Alejandro Flores matched up with Saba Bolaghi in the first Featherweight bout of the night. Flores earned his fourth straight victory defeating Bolaghi by unanimous decision. The result moved his career record to 21-3-0, and earned 3 points in the competitive division.

All PFL 2022 Season events are live in primetime on ESPN, ESPN2/ESPN+ and ESPN3 (Spanish), as well as on a wide and diverse group of premier global distribution partner platforms reaching 160 countries around the world. 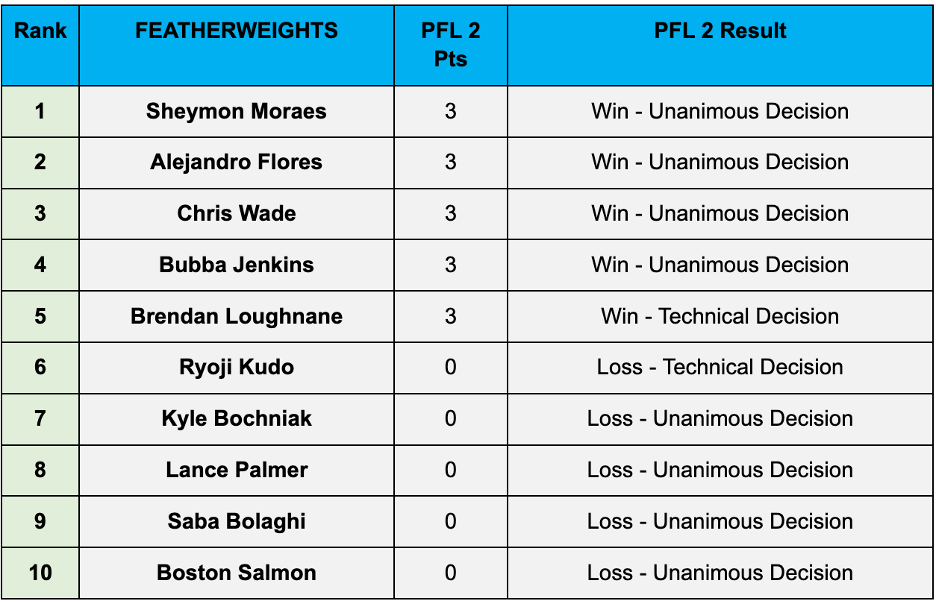 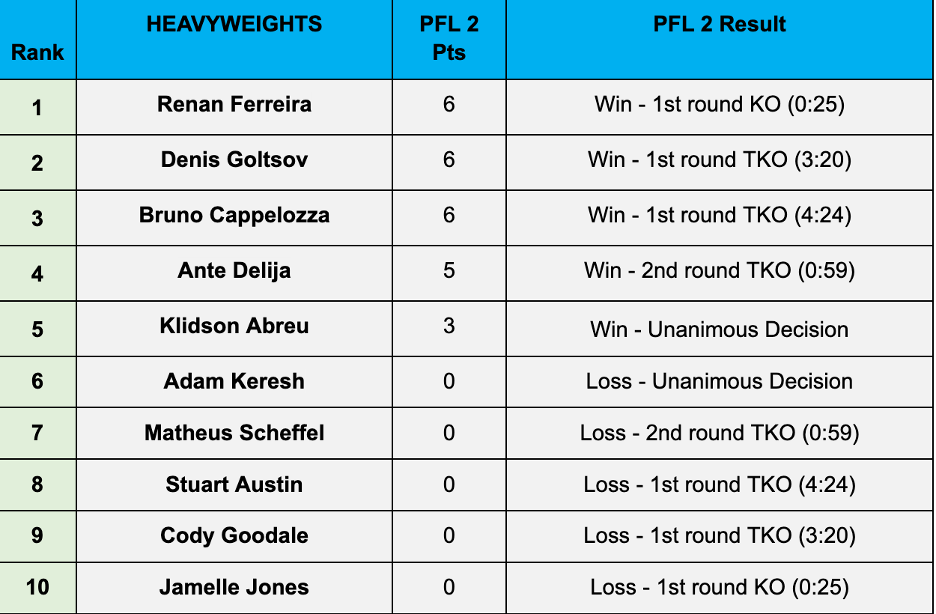