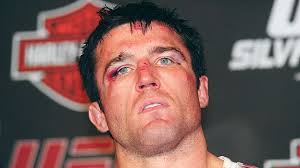 At a hearing today in Las Vegas, Sonnen (28-14-1 MMA, 7-6 UFC) admitted his wrong doing and said he agreed with the commission’s punishment. This also includes paying the cost and analysis of the very tests that caught him. Agreeing not to fight in any other jurisdiction for a period of at least 2 years, and acting as an educator to both the commission and fellow fighters on the issue of performance-enhancing drugs.

The monetary fine for this violation of the rules can carry a $250,000 fine, but the commission decided not to go for this form of punishment.

“Today is the day for him to take responsibility for cheating,” NSAC chairman Francisco Aguilar said. “It’s not a time to hide behind false excuses. I think a great penalty is warranted here for the sake of a clean sport.”

Sonnen was flagged for a total of five PEDs prior to a scheduled fight with Vitor Belfort at the July 5 pay-per-view event: anastrozole, clomifene, human chorionic gonadotropin (hCG), human growth hormone (HGH) and recombinant human erythropoietin. The first failed test prompted the UFC to pull him from the fight, after which he retired from the sport on June 11. The second positive test, which revealed the presence of noted PEDs HGH and EPO, set off the termination from his contract where he served as a host of FOX Sports 1′s “UFC Tonight.”

While testifying before the commission, a grave Sonnen said, “I don’t want to say anything that comes off as an excuse (for the positive tests), because I’m guilty. I’m ashamed.”

What is next for the ‘American Gangster’ Chael Sonnen? 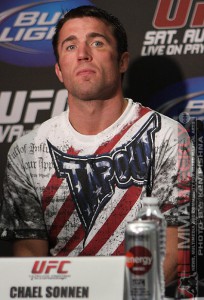