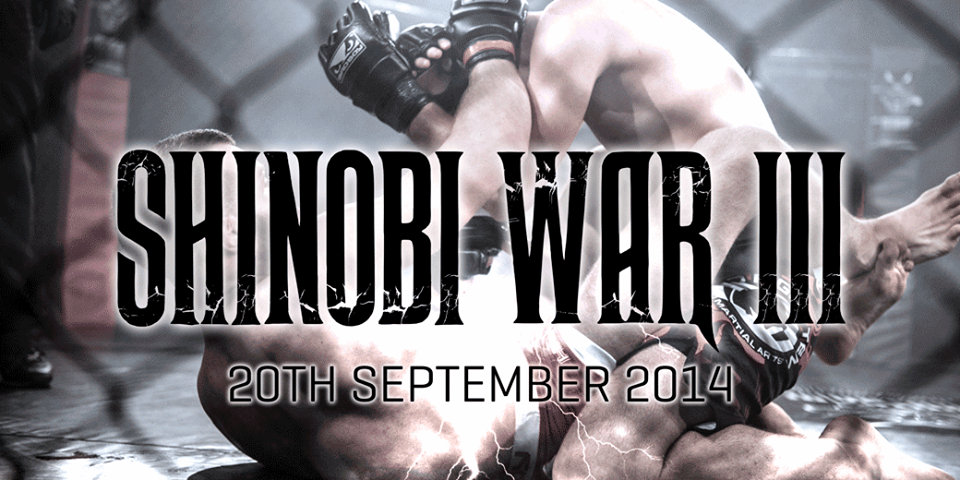 Undefeated Flyweights John Shink (4-0) and Flyweight phenomenon Dominic Wooding (8-0) are all set to square off in a tantalising title fight.

Wooding has impressed since bursting onto the scene in late 2012, and having trained with the likes of Brad ‘One Punch’ Pickett Bola Omoyele and Luke Newman, the Terror Squad trainee has all it takes to claim the Shinobi Flyweight belt. Wooding was last in action at FCC 10 where he decisioned the very experienced Connor Hignett.

Morefire MMA’s John Shink is an undefeated fighter that loves to bring the action to all areas of the cage. John showcased his skills in a highly entertaining Shinobi War II scrap with Ste Rogers. Since his Shinobi debut Shink has been on a tear picking up wins on promotions such as Warrior Fight Series and ICE FC in quick succession.

“I am delighted to have 2 of the brightest prospects in UKMMA competing for our Flyweight Title. I have long been an admirer of Dominic Wooding and John Shink certainly impressed me in his first Shinobi outing. With most of the other top amateur flyweights either turning professional or about to; this bout could very well determine who is the best in the division.”

Meanwhile, Chris Pieroni of HFFS will make his return after opening the promotion with a literal bang, knocking out his first opponent in the first 15 seconds with an unforgettable headkick. He will fight Beyond Black Belt’s Reece Phillips, who defeated Chris‘ teammate on the opening show, come September 20th.

An interesting Middleweight bout between Igor Puskarskis (6-0) and Amadeusz Arczewski (2-1) has also been added to what will inevitably be the best Shinobi War event to date.

Tickets go on sale next week and are priced at £30 each for standard seats and £65 for VIP. You can purchase tickets from the following, direct from the fighter or from one of the following outlets:

Visit their website to find out more about Shinobi MMA