Greg Jackson Explains The Cause Of Jon Jones Injury 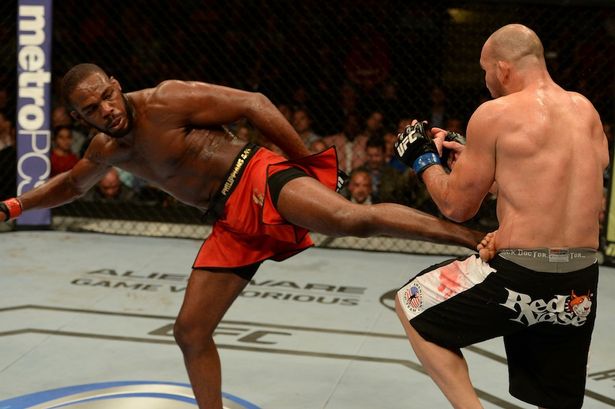 Information has come to light about how Jon Jones suffered an injured that postponed his title defense against Daniel Cormier. According to Jones’s trainer Greg Jackson we have Alistair Overeem to thank

As you can imagine, Jones’s rival Daniel Cormier has some opinions about the scrapped fight:

It’s very disappointing,” Cormier told MMAFighting.com. “I started to train very hard. It’s a little discouraging, but now I have time to get completely healthy. I don’t know how hurt Jon is but we have to remember that I took this fight with a pre-existing (knee) injury. I could have fought through it, I just wish he would have done the same.”

Cormier explained more during an appearance on FOX Sports 1 yesterday:

“I’ll get a full training camp now,” Cormier said. “When I heard Jon was hurt, now him and Gustafssson are on the same schedule in order to be healthy. So my first question was, ‘I don’t have to go behind Gustafsson again now, right?’ And I was assured that it’s going to be me in January. He’s not going to take my place again…

“I said from the beginning that Jon Jones isn’t afraid of anyone,” Cormier said. “But if I can go in there with a partially torn ACL, I think he should have fought; tough it up and fight.

“I don’t know the extent of his injuries, and if it’s really bad, I’ll take it back. But on the surface, I heard he hurt himself. But people hear ACL, they think you’re out for a year. I’ve been hurt, and I’ve been training. I wish he would have just fought.

“I’m saying tough it out sometimes,” he added. “Sometimes you’ve got to go in there and tough it out and just fight…

“I think people recognize that it’s a big fight,” he said. “I think by January, people will understand, and maybe people will stop thinking about us fighting on stage or getting caught cussing each other when the cameras were on.

“You’ve got two of the best fighters in the world competing for the light heavyweight championship, so maybe it will let some of this time die down, people worrying about the stuff outside the cage and focus on the fact that in 37 fights, Jon Jones has not lost two rounds combined. But in terms of fan interest, people were excited about this fight, and I’m glad that they’re still going to get the fight.”