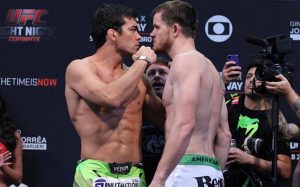 Standing across the Octagon facing Machida will be a fighter who looks to be in the peak of his career as CB Dollarway’s recent impressive form has seen him rewarded with the biggest fight of his career, Dollarway comes in to this fight on the back of an impressive decision victory over Francis Carmont and has already shown the ability to defeat a Brazilian fighter in Brazil with his first round TKO of Cesar Ferreira in Natal Brazil,

Stylistically the fight favours the Brazilian, with his pin-point accurate striking, and blistering speed, capable of ending the fight in an instant, coupled with some of the best footwork in the game it looks like being a bad match up for the American, although Dollarway has looked impressive of late this will more than likely be a step up too far, and I imagine Machida will catch him with something then pounce for the finish.

In the co-main event the Brazilian former UFC bantamweight world champion Renan Barao makes his return to action after failing to weigh in against TJ Dillashaw in his last scheduled appearance inside of the Octagon in what was due to be a rematch of his title-losing clash with the aforementioned Dillashaw. Long considered one of the best pound-for-pound fighters in the world until the upset loss and consequent relinquishment of his UFC title, Barao will be eager to put on a spectacular display in front of his native countrymen and work his way back to a title shot.

Stepping up to face Barao, in what is the biggest fight of his career so far is the Canadian submission specialist Mitch Gagnon, Gagnon currently on a 4-fight win streak, and with only a single loss in 2012 to Brian Caraway in his last 11 fights this represents a huge opportunity for the team shredder member. Gagnon, a Brazilian Jiu Jitsu purple belt holds a very impressive 11 submission wins from 12 professional victory, finishing all but one of his fights by submission. However, Barao is no slouch on the mat, the Brazilian Jiu Jitsu black belt holds 14 submission wins of his own and the is also the more well-rounded of the two, able to showcase a dangerous striking game with a high-level opportunistic submission game as was evident in the Brad Pickett fight, where the then champion Barao hurt Pickett on the feet then in a blink of an eye swarmed to take the back of the Englishman before locking up a fight-ending rear naked choke.

Simply put Renan Barao is world class, and is comfortable wherever the fight goes, he is sure to be hurting from the disappointment of losing the title, and will no doubt be itching to get back inside the Octagon following the fiasco that was the failed weight cut in the rematch with Dillashaw, Barao will no doubt want to make a statement and he may well look to submit an opponent who is considered a submission specialist.

Next up, and forming part of the main card broadcast is a light heavyweight clash between Patrick Cummings and Antonio Carlos Junior. Making his fourth appearance inside of the UFC after being given a baptism of fire in his UFC debut against Daniel Cormier, Patrick Cummingshas since notched up 2 wins over Roger Narvaez and Kyle Kingsbury, Cummings, a two-time NCAA Division I All-American and 2004 runner-up as well as a two-time US National Team Member, Cummings made the transition to mixed martial arts in 2010 and has gone on to compile a 6-1 record.

His opponent Antonio Carlos Junior is the TUF Brazil season 3 winner, this will be his light heavyweight debut, after making the cut from heavyweight where he competed on the show. A two-time Brazilian Jiu Jitsu world champion and currently 4-0 in his MMA career this fight represents a chance to gain a win in front of his own countrymen, but Cummings has shown so far in his relatively short spell in the UFC that he can be effective with his wrestling and dominant ground control.

Although it’s in enemy territory, and against a former heavyweight and two-time BJJ world champion, I like Cumming’s approach to fighting, I say he uses his wrestling advantage to control the fight and tire out the bigger man, could possibly get the stoppage late on but I’ll say he gets it done by unanimous decision.

In a clash of two former champions from outside of the UFC, Former Jungle Fight welterweight champion Elias Silverio currently undefeated at 11-0 in his MMA career faces former M1-Global welterweight champion Rashid Magomedov, currently 18-1, in what is sure to be an entertaining encounter. With a pair of back-to-back decision victories over Tony Martin and Rodrigo damn Magomedov has looked pretty solid so far in his short UFC career, he will be hoping to raise himself higher in the rankings with a victory over Silverio on enemy territory, something which he achieved on his last foray into the Octagon defeating Rodrigo Damn in Sao Paulo, Brazil.

Silverio is currently 3-0 inside the Octagon comprising of two decision victories and a submission over Ernest Chavez, he’ll be hoping to make it 4-0 on Saturday night

I like the well-rounded game of Magomedov and can see him picking up another decision victory over a Brazilian in Brazil.

Erick Silva takes on Mike Rhodes in the second fight of the main card as Silva looks to rebound from a valiant decision loss to Matt Brown back in May, in a bout that was declared fight of the night. Whatever your opinion of Erick Silva one thing is clear, he possesses the talent to make a run at being a contender, some may argue that he needs to change camps to one of the more highly esteemed training camps in the US to really fulfill his potential and I for one share that opinion. He’ll be looking here for an impressive finish against Rhodes who is currently 0-2 in his 2 ventures inside of the Octagon to date dropping a pair of decisions to George Sulilivan and Robert Whittaker, and I think he gets it in front of a fired up Brazilian crowd and moves toward getting another shot at a top 15 ranked opponent.

In the opening bout of the main card two Brazilian’s collide as Daniel Sarafian faces promotional newcomer Antonio dos Santos Jr who is taking this fight on short notice after Dan Miller had to pull out injured. Sarafian who is a BJJ black belt and holds 7 submission wins on his record is most commonly known for making it to the finals of the first season of TUF Brazil. Currently 1-3 so far in his UFC career this is a fight he surely must win, and will almost certainly not get a better chance facing a debuting fighter taking the fight on short notice.

Antonio Dos Santos Jr is the former Jungle fights light heavyweight champion and is known to pack some power into his punches, as his 4 TKO’s victories on his record show. Currently 6-1 in his MMA career to date this fight represents a big opportunity for the 26-year old, Sarafian will no doubt want to get this fight to the mat and lock in a choke , and I see that being exactly the case here.

CAGE WARRIORS AN INSIDE LOOK ON A BIG YEAR IN 2014