Joesph Duffy set to make his debut at UFC 185 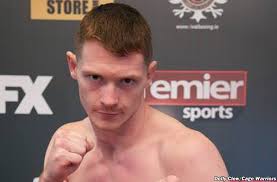 The 26 year old Irish man Joseph “Irish Joe” Duffy (12-1) is most known for beating the infamous Connor McGregor and beating Norman Parke. Duffy left his MMA career behind to pursue a boxing career in 2012, but he has since returned to the cage last year. Since then he has racked up finishes in his two fights, including a 30-second, flying-knee KO of Julien Boussuge on Nov. 15th in Cage Warriors.

Vagner Rocha (11-4 MMA, 1-3 UFC) is a former Strikeforce and Bellator fighter returned to the UFC cage this past November facing Jake Mathews at UFN Rockhold vs. Bisping, where he lost in the second round by rear naked choke.

With the addition to the card, UFC 185 now includes:

Andy Ogle Fighting For His Future