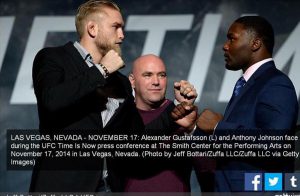 UFC on Fox 14 will take place on January 24th,2015 at the Tele2 Arena in Stockholm, Sweden. The main event features a battle of two top five Light Heavyweights as #1 ranked Light Heavyweight Alexander Gustafsson (16-2) 8-2 in UFC will square off against #3 ranked Anthony Johnson (18-4) 8-4 in UFC with the winner to receive a Light Heavyweight title shot against current champion Jon Jones. The co-main event is a clash of two true MMA Veterans as #7 ranked Middleweight Gegard Mousasi (35-5-2) 2-2 in UFC will face Dan Henderson (30-12) 7-6 in UFC in what will be a must win match up for both fighters.

When Alexander Gustafsson faced Jon Jones for the Light Heavyweight Championship on September 21,2013 many people thought he did enough to get the decision win over the Champion that night, the judges had other thoughts though as he lost a razor close decision. With his long figure and world class striking, Gustafsson has been at the top of the 205 pound division for many years. Along the way he has beat notable fighters like Shogun Rua, Matt Hammil and Thiago Silva and having recently defeating the once unbeaten Jimi Manuwa last March in London “The Mauler” is one win away from getting his rematch with long rival Jon Jones. His opponent is probably his toughest challenge yet as he faces American powerhouse Anthony Johnson. With starting off his UFC career as a Welterweight, Johnson was notable for his knockout power and constant aggression. Over time however his body was having trouble making the 170 pound weight limit and was subsequently released from the promotion. After going 6-0 outside the UFC he was offered a spot back in the promotion as a Light Heavyweight and since returning he has gone 2-0, with victories coming over Phil Davis and Antônio Rogério Nogueira. With his still knockout power and elite level wrestling Johnson is a huge task for anyone that is matched up against him and with a win in Sweden he will finally receive what he has been after for so many years, a Championship opportunity.

The co-main event features two of the most experienced fighters in MMA today As #7 ranked Middleweight Gegard Mousasi will share the octagon with UFC Tournament winner and former Strikeforce Light Heavyweight Champion Dan Henderson in a Middleweight fight. Both fighters are coming off submission losses and a win for either fighter will push their name a little bit further up the Middleweight ladder. With being one of the oldest members of the UFC roster Dan Henderson has faced a who’s who in multiple weight classes and is finally returning to the Middleweight Division and  he truly believes he has another title shot run in him. With his Olympic level wrestling and knockout power Henderson is always a threat for anyone he faces and is one of the toughest fighters in the UFC. The man welcoming Henderson back to the Middleweight Division is also a former Strikeforce Light Heavyweight Champion, #7 Ranked Middleweight Gegard Mousasi. Still early in his UFC Career, Mousasi has showed crafty striking skills and a slick submission game. He is one of the most experienced fighters in the UFC’s Middleweight Division and a win over another veteran will solidify that he is right up there with the best in the world and his name should be in the title picture.

The middle fight on the main card features a clash of two top 10 Light Heavyweights as #6 Ranked Phil Davis (13-2-1) 9-2-1 in UFC will battle #9 Ranked Ryan Bader. (18-4) 11-4 in UFC. Being in the UFC for almost five years Davis has showed elite level grappling and a top notch wrestling game. His victories over Lyoto Machida, Glover Teixeira and Alexander Gustafsoon show that he can beat even the best of the best in the UFC. If he can make a true statement over another top 10 opponent he may be looking at a title run in 2015. His opponent is another top wrestler as Ultimate Fighter winner Ryan Bader will be trying to make it four in a row and secure a top victory. Since winning The Ultimate Fighter in 2008 Bader has showed real knockout power and a very high level wrestling game. His victories over Keith Jardine, Quinton Jackson and Anthony Perosh show that he is capable of beating top veteran competition. If he can solidify another win he will be looking at higher competition in 2015 and will move one step closer to a title shot.

Kicking off the main card is a clash of two scrappy Featherweights as Akira Corassani (12-5-1) 3-2 in UFC will match up against Sam Sicilia (13-5) 3-4 in UFC. Being an Ultimate Fighter Veteran Corassani has showed good toughness and a will to keep fighting. After loosing his last two fights however this fight is a must win for him and we will all see if he can make a statement in Stockholm. His opponent is another hard headed featherweight as Sam Sicilia will be looking so make a statement in Sweden. With his unique striking and constant movement Sicilia will be looking to out strike his opponent and send a message to the 145 pound division.

Which fighters will be victorious and move one step closer to Championship challenges?  Find out January 24th, 2015 at UFC on Fox 14 in Stockholm, Sweden.

Henderson In For Green