As a fighter, being tall has its advantages such as longer reach and the ability to lock in submissions easier. In today’s episode of Across The Pond, 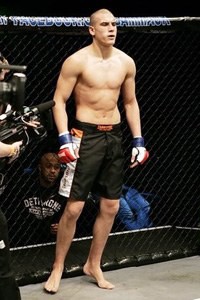 you will meet a fighter whose tall frame and smothering ground game gives him an advantage over his opponents. A professional since September 2010 and fighting out of Tristar Gym with UFC stars Rory MacDonald and GSP, 24 year old Tom Breese is undefeated with an 8-0 record consisting of six submissions and two knockouts. Prior to signing with the UFC in May of this year, Tom fought for BAMMA and Cage Warriors. He made his MMA debut at BAMMA 4 and defeated his opponent via submission in the second round. Breese submitted his next two opponents before picking up a second round knockout win over Mark Tucker at BAMMA 9. He then submitted Jack Magee at BAMMA 10 and Warren Kee at BAMMA 11 before being sidelined with an ACL tear that kept him out of action for two years. Tom returned to the sport in 2014 to take on France’s Thibaud Larchet at Cage Warriors 74 in London and submitted the tough Frenchman late in the third round. In his UFC debut, Tom took on Brazil’s Luiz Dutra Jr. at UFN 67 and defeated him via knockout late in the first round. His next fight will be in Dublin on October 24,2015  where he will  face Cathal Pendred at UFN 76.